WHEN INTERPRETING TRAINING DATA, THINK TWICE BEFORE DOING NOTHING!

Load Management Does Not Mean “Stop Athletes from Training”!

“Load Management” has become a popular phrase in high-performance sport –unfortunately the practice is commonly associated with resting players, missing practice, or playing fewer minutes. The phrase has become so common that even the average ‘sporting fan’ will have an opinion on Load Management, typically because they have paid a large sum of money to watch their favourite player, only to arrive at the arena to find that player being rested for Load Management reasons!

In our previous article, we described some critical reasons for monitoring an athlete’s training:

(1) To build to higher chronic workloads,

(2) To prepare for the most demanding passages of competition, and

(3) To progress athletes as quickly and safely to these high loads.

Given the clear benefits of effective athlete management, it is interesting that some coaches and commentators still (incorrectly) believe that Load Management is simply a term that sports medicine staff have created as an excuse to “stop an athlete from training”! How did we get to this point?

Did Sport Lose Its Way and Are We Heading in the Same Direction Again?

In the early 2000s, researchers began studying the relationship between training load and injury, particularly in team sports.1,3 This research coincided with several technological advances – the first being the development of commercially available, wearable movement sensors (e.g. global positioning systems), and the second being the introduction of databases used to monitor athlete workloads. Sporting teams began to invest more resources into tracking their players – the salary paid to staff to monitor athletes cost a fraction of what owners would pay to an injured ‘star’ who was unable to play. It was a smart investment! The more technology developers stated that their product could be used to “predict and prevent injuries”, and the more the media promoted that story, the more excited owners became. High-performance directors had to be seen to be using the “data” and perhaps the simplest way to do this was to remove an athlete from training. Training “thresholds” were established, with some performance staff even approaching coaches mid-session to stop practice, in fear that their athletes had “run too far” or “their workloads were too high”! While additional recovery may be warranted in some cases, consistently managing athletes away from training load is unlikely to be the best way to develop robust performers, capable of thriving during the intense demands of competition.4

How Can We Develop a Robust Athlete?

In direct contrast to early views, there is a growing body of evidence demonstrating that low chronic workloads increase injury risk.4 These findings suggest that progressing to higher chronic loads would be a preferable approach to improving athlete availability, than reducing training loads. But sport performance and medicine staff are not only responsible for keeping athletes available – those athletes must be ready to perform when required. In line with load-injury studies, recent evidence has shown that athletes with higher chronic loads and fewer “spikes” in load, also demonstrate greater readiness to perform.7 These findings highlight the performance-enhancing capabilities of an effective Load Management program. While it is recognized that a myriad of factors other than workload can impact both injury risk2,5 and performance,5,7 the absence of an effective loading program is akin to shooting at a target while blindfolded.

How can sports medicine staff avoid spikes in workload if they have no information on the athlete’s training history?

How can an athletic trainer, physical therapist or strength and conditioning coach progress to higher workloads if they do not measure workload?

Given the relationship among training load, athlete availability, and readiness to perform, how can an athlete have the best chance of achieving their performance potential and remaining injury-free if appropriate loading strategies don’t underpin their training program?

What About “Fitness” and Tolerance to Workload?

First, if medical staff know that loads are likely to increase in the near future (e.g. schedule changing from one game to multiple games in a week), then raising chronic load in the weeks prior to that change in schedule will likely improve load tolerance. This pre-loading raises chronic load, thereby reducing the gap between the “floor” and the “ceiling” – it is much harder to spike loads from the “ceiling” than the “floor”, because when chronic load is low the only way is up! Second, well-developed physical qualities (e.g. eccentric hamstring strength) have been shown to independently decrease injury risk. Third, specific physical qualities (e.g. lower body strength, speed, and aerobic fitness) moderate the workload-injury relationship – players with better developed aerobic fitness, speed and lower-body strength are more resilient to spikes in workload than players with poorly-developed physical qualities9 (Figure 1). 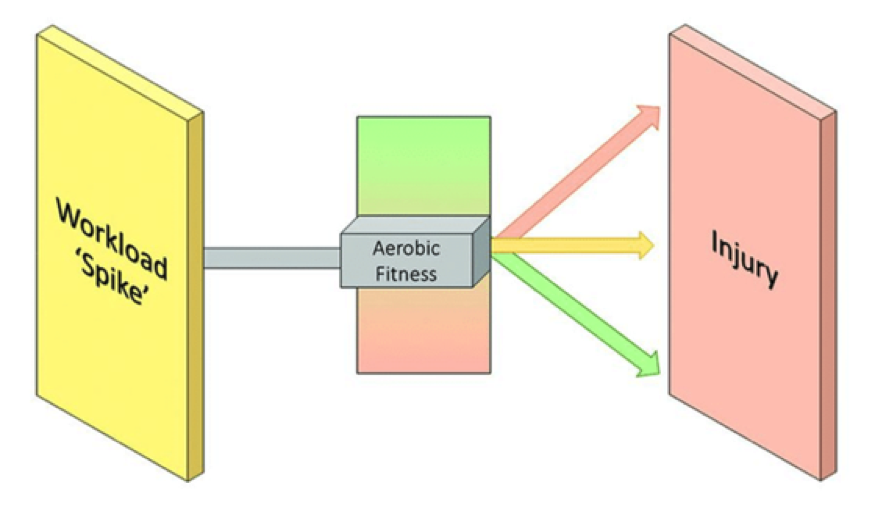 If absolute load (either the “floor” or “ceiling”) cannot be modified in the short-term, then performance and medical staff can use physical testing results to stratify players into well-defined risk groups based on particular loading patterns. An example of different moderators of the workload-injury relationship and suggestions to practically manage two different athletes with similar workloads is provided below:

Think Twice Before Doing Nothing!

The absolute risk of injury on any given training day is very low (<1.0% per training day). Rather than jumping at shadows, practitioners are encouraged to think twice before doing nothing! Building robust and resilient athletes begins with a good training program. Sports medicine practitioners should have faith (1) in their ability to design training programs that develop robust athletes, and (2) that their athletes are more resilient than they realize. Finally, effective athlete management programs consider the moderators that influence players’ ability to tolerate workload. Knowledge of these moderators and how they interact with workload provides a more comprehensive athlete monitoring system than simply measuring workload in isolation.

By Professor Tim Gabbett and the Gabbett Performance Solutions team

Practitioners are encouraged to read the original research. For more information about the work performed by Gabbett Performance Solutions, contact info@gabbettperformance.com.au.