What is exercise-induced muscle damage?

Exercise-induced muscle damage (EIMD) can have important consequences for the performance of athletes as it is associated with muscle pain and a decrease of the neuromuscular function. Also, its effects can remain for up to two weeks after exercising. In fact, one of the most popular effects of EIMD is delayed-onset muscular soreness (DOMS).

What is muscle damage? (Traditional theory)

Different theories have been proposed to explain the origin of EIMD. A classic theory and point of view is the one that points to lactic acid crystallisation as the main cause. Given that high intensity exercise is associated with higher lactate production, it has traditionally been thought that the lactate produced could accumulate in the muscles, get crystallised in the following hours, and thus causing this delayed muscle pain. However, this theory is unfounded because these crystals have not been discovered in the body, and it is also known that the lactate produced during exercise is almost eliminated (either by oxidation or by using it as a substrate to re-synthesise muscle glycogen) in the hour after exercise. Patients affected by McArdle’s disease, which is characterised by an absence of glycogen phosphorylase and therefore the inability to use muscle glycogen (hence, they do not produce lactate), have shown to present EIMD.1

Scientific evidence regarding EIMD has increased in recent years, and we now know that its origin is multifactorial and that it depends on a series of chain mechanisms. These mechanisms were reviewed almost 20 years ago in an article published in the prestigious Journal of Physiology,2 and have recently been discussed in other review articles.3,4 In general, it has been proposed that the EIMD process can be divided into two parts.

Intense exercise, particularly when doing a lot of eccentric movements (muscle elongation) as it happens in jump damping or during running, which produces a stretch of the sarcomeres that can exceed the overlap of the myofilaments, causing its rupture. As summarised in Figure 1, this rupture would not only affect the sarcomeres but also other elements of the cytoskeleton of the cell (such as titin), creating a rupture of the outer cell membrane and other cell membranes such as that of the sarcoplasmic reticulum. In fact, this damage to the membranes of the muscle cell is what produces an increase in the concentration of enzymes and muscle proteins in the blood that is normally found within the cell, as is the case of creatine kinase (CK) and the myoglobin or LDH. That is why they are considered as markers for muscle damage. This process of mechanical damage to cell membranes would also cause a worsening of the excitation-contraction processes of the cell, thus reducing neuromuscular function.

On the other hand, the stretching of the membranes (activating mechanosensitive ion channels) and their rupture, produce an increase in the concentration of intracellular calcium, which would enter from outside the cell and would also be released from the sarcoplasmic reticulum. This activates the calcium-dependent proteolytic enzymes such as calpain, which would continue to damage the cell. This excessive increase in intracellular calcium can also produce an uncontrolled muscle contraction, which would support the increase in muscle tension observed after EIMD. 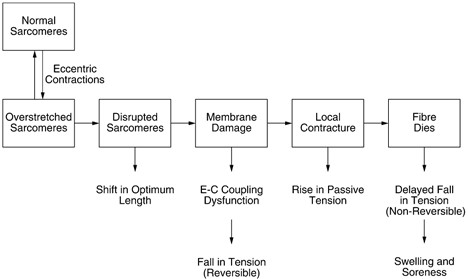 Once this muscle damage is produced, a pro-inflammatory process starts, where the cells of the immune system (including neutrophils and macrophages) infiltrate the damaged tissue in order to clean the debris from the damaged area and prepare it for regeneration. These pro-inflammatory cells initially generate a series of cytotoxic responses, increasing, for example, the production of free radicals, which could also further increase muscle damage. It is this inflammatory process that causes a pain peak approximately 24 hours after EIMD, as there is an activation of receptors on nerve fibres III and IV (receptors for mechanical, chemical, and thermal signals). However, it is this inflammatory response that will later also facilitate muscle recovery by activating satellite cells (“stem” cells present in muscle fibres), which will act as new myonuclei in damaged fibres.

EIMD consists in a mechanical rupture of the cell membranes of the muscle fibre, which mainly takes place prolonged eccentric exercise. This mechanical damage is accompanied by a series of secondary processes (including an increase in intracellular calcium with the consequent increase in proteolysis, and an activation of inflammatory processes) which will result in an increase in the damage produced. However, this inflammatory process will also be responsible for facilitating muscle regeneration after EIMD.