What Dietary Supplements are recommended for Football Players

Although training is the cornerstone of football players’ performance, nutrition is also important. An adequate nutrition plan will play a principal role in enabling athletes to handle training loads, to easily keep up with changes in their training schedule and to improve performance on match days. In relation to nutrition, dietary supplements—understood as the extra nutrient intake or food consumption in a daily diet with the aim of improving performance or health— has grown in importance in recent years. In regard to football, it is estimated that more than 90% of athletes take dietary supplements, the most usual ones being sports drinks and vitamins.1 On the other hand, a research done during the 2002 and 2006 World Cups has shown that the estimated prevalence was 43%, probably because sports drinks are not considered supplements.2

In addition, there is even less scientific evidence for some supplements within elite football. In this context, the UEFA’s panel of experts (in which the responsible for the nutrition department at FC Barcelona, Dr Antonia Lizarraga, together with other coaches, scientists, doctors, nutritionists and professionals in sports have taken part), they’ve developed a consensus published in the prestigious British Journal of Sport Medicine stating that some supplements may have more substantial evidence supporting its use for football players.4

As the authors suggest, athletes should prioritise food over supplements which are taken with the only aim of accomplishing specific objectives regarding health or performance. In this sense, there are some supplements that can be recommended in certain occasions and that have the scientific evidence confirming its use, which is also summarised by the International Olympic Committee consensus on this topic (see Table 1 for a summary of the dietary supplements that can be advisable to take for football players in case they are not capable of meeting the requirements when following a daily diet).5 For example, in some occasions, football players can have certain micronutrient deficiencies such as vitamin D, calcium and iron. In these situations, supplementing with these micronutrients which are safe for health can be convenient—unless doses are administered chronically or in great amounts, as is the case with Iron6—although it is ideal to using a renowned and reliable brand and receiving therapeutic doses during the shortest possible period of time. 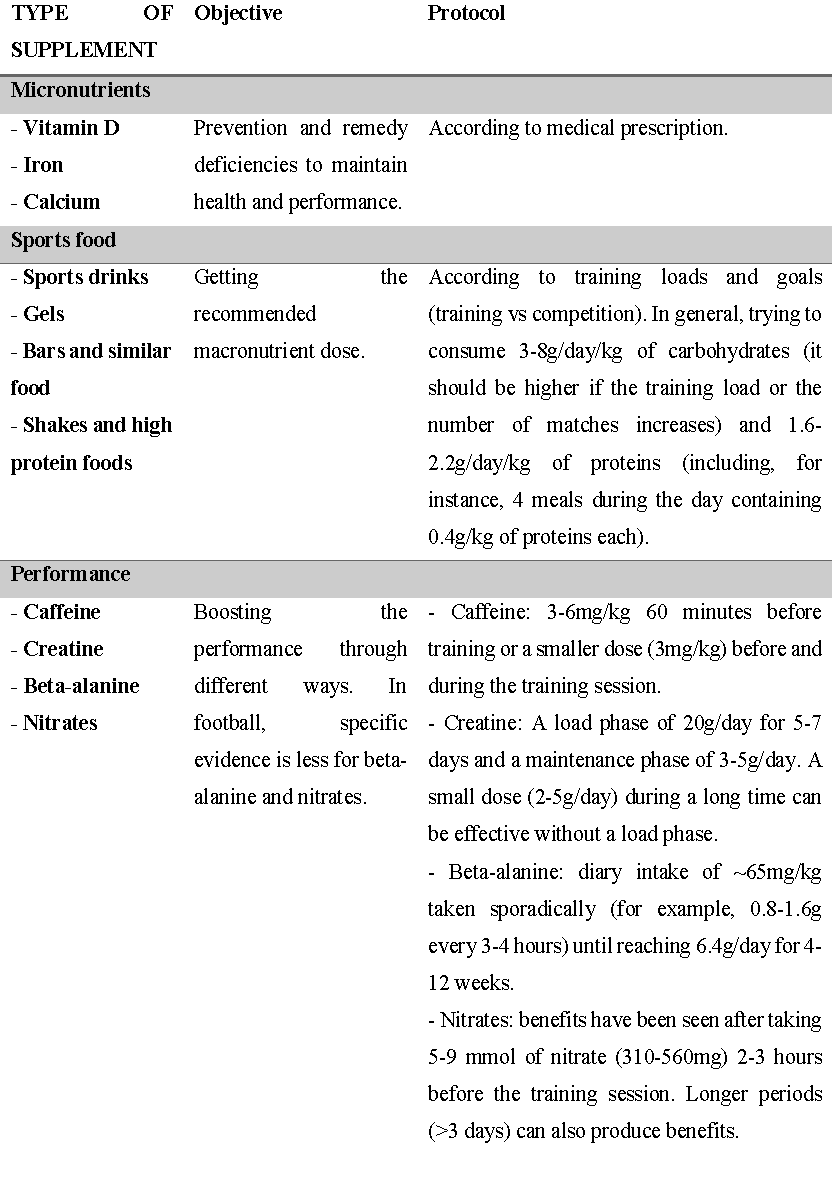 On the other hand, although taking all the necessary nutrients following a normal diet should be top priority, on many occasions, this is particularly difficult to achieve for football players’ (for example, when they have to attend several training sessions which makes food intake between them difficult to digest). Therefore, it is advisable to supplement with “sports food”, i.e., electrolyte and carbohydrate drinks, gels, bars, or recovery drinks, among others.

Moreover, many dietary supplements can be effective and boost sports performance, although, as the authors of the consensus state, not much research has directly examined the effects produced by these supplements on performance, especially in football; needless to say, they have not examined the effects produced in professional football players yet. However, as evidence shows in other sports, supplements such as caffeine or creatine can be advisable to take as an ergogenic aid, and others such as beta-alanine or nitrates have less evidence but can also be very effective.

Lastly, we must not forget that the use of dietary supplements can also presents some risks. In addition to the possible adverse effects of some supplements, it has been observed that some can contain possible substances not mentioned on the label or banned in sport or can even heighten the risk of these effects. In fact, in several studies on hundreds of dietary supplements, it was found a high prevalence (15-25%) of substances not mentioned on the label and banned in sports such as steroids.7,8 This is the reason why it is important to choose to buy dietary supplements from reliable companies and that have ensured independent quality controls of their products (such as the Informed Sport programme which proves the absence of banned substances in supplements).

Even though athletes must try to ideally fulfil the dietary requirements following their daily diet, it is advisable to take supplements in some cases so as to prevent or remedy micronutrient deficiencies (such as calcium, iron, vitamins) with the aim of taking the recommended macronutrient dose (such as proteins or carbohydrates), handling training loads and to boost performance (for example, through caffeine or creatine).  However, it is important to take into account that many supplements lack scientific evidence, especially in football, and that they sometimes pose a risk of containing substances not mentioned on the label or banned in sport that could produce adverse effects. Therefore, a detailed control of the athletes’ supplementation will be fundamental regarding the type of supplement taken, its duration and the dose.