What are Expected Goals and what do they really tell us?

If you have been following this series of articles and had previously read about football analytics, then you might be surprised that I haven’t written about Expected Goals. I am going to explain now what they are, how they can be used to measure performance, and why we should be careful in the way we interpret these numbers.

Expected goals (or xG) are the best-known metric in football analytics. They measure the quality of a chance created. When we say that a shot had an xG of 0.2 (or 20%), we mean that typically shots of this type will be scored 20% of the time.

The two most important factors involved in determining the xG value of a shot are the distance to the goal and the amount of the face of the goal the shooter can see. Oblique angles from the side of the goal are harder to score from, and angles in front of the goal are easier. By fitting a statistical model to these two factors, we find the following ring-like shapes which tell us the probability of scoring from different points around the goal. 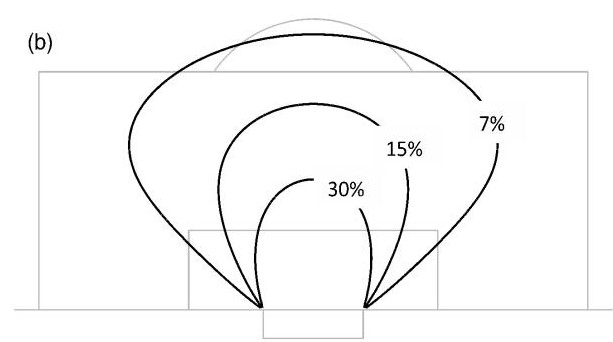 Other factors such as if the shot is taken with the player’s best foot (or with the head), if the assisting ball was from a cross or cutback, the position of defenders and goalkeeper (when we have tracking data), and so on are also important in determining xG of a chance. The percentages also differ slightly (although not very much) for women and men, and between leagues. But the most important rule is that, the closer an attacker gets to the goal and the more of the goal she can see, the better the chance she has of scoring.

The most common context in which xG is discussed in the media is in summarizing a single match. Here is an xG map for recent Primera Division matches where FC Barcelona met Real Madrid and Madrid CFF. 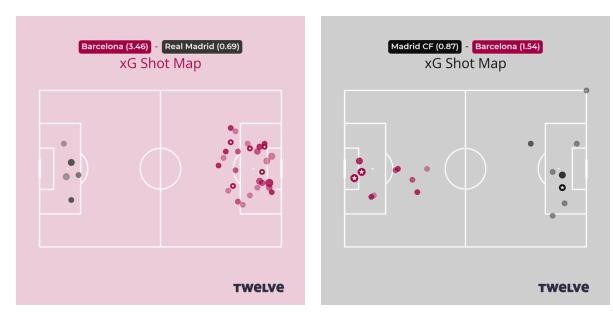 Each circle is a shot. The intensity of the color of each circle is proportional to the xG of that shot. A star indicates a goal. We see here that FC Barcelona dominated the match against Real Madrid (they scored 4 goals from an xG of 3.46) and were less able to create high-quality chances in the away visit to Madrid CFF. In both these cases, the scoreline and the xG told the same story as each other: a big win in the first match and a tighter game in the second.

While xG is a valuable tool, like all statistics or performance indicators, we have to think about what they are really telling us. It isn’t simply the case that the team with the highest xG was the worthy winner of the match.

Take, for instance, a hard-fought match in the Champions League qualifiers between Bayern Munich and Lyon. Bayern won 1-0, but recorded 0.45-1.68 in xG. 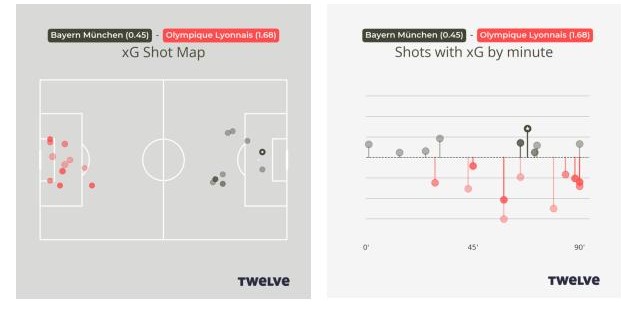 We might be tempted, on the basis of xG, to say that Lyon should have won. But… if we look carefully at the time of events, we see that Lyon had two very good chances (with a total of 0.7xG) in the 58th minute. Both of these fell to Catarina Macario, one where the ball came slightly behind her, making it hard to shoot before the keeper got back.

The second was the rebound, after the keeper saved, which Macario failed to control.

It was these two events, where very small margins determined the outcome, that contributed nearly half of Lyon’s xG total. Therefore, the xG tells us little more about the scoreline than the result itself. We can’t say that Lyon should have won, only that it was a close match.

How to use xG to measure performance during a football season

Following on from such examples, and a more in-depth statistical analysis of xG, I have developed some rules of thumb for using xG to measure performance during a footballing season. They are as follows:

1 or 2 matches: When discussing one or two matches to stick to talking about the match: what happened, tactics adopted, players’ movement, etc., and speculate less about what xG means about the team in the long term. Expected goals tell us little more than the scoreline itself. While it might feel a bit better to say, after a big loss to a rival, that ‘we won on xG’, I’m afraid that single match xG is still very random.

3 to 6 matches:  They give us a clear picture of a team only if they consistently lose or win. If xG and goals tell a different story then it is time to ask if a team might not be quite as bad (or good) as they seem.

7 to 16 matches: This is the most exciting time for using xG. Now goals are becoming a more reasonable measurement of performance. It is difficult to sustain a 10-match lucky streak and you don’t really expect to have a 10-match bad run unless the team is poor. So if xG and goals contradict each other then it is important to highlight this in the analysis.

More than 16 matches: I once told a club analyst, whose team had over-performed xG for a whole season, that this was probably because his team was actually good. I’m not sure he was convinced, but he should have been. After 16 matches, the difference between the noise in xG and the noise in real goals is small. But expected goals are a mathematical model, while goals are reality. So, expected goals tables become less relevant in evaluating a whole season and we should concentrate on real goals.

Clubs often use rolling averages of expected goals to measure the evolution of their performance. Work by Ben Torvaney has shown that around a 10-game window is the best way to exploit xG as a predictor of attacking and defensive success. This is a very good tool, for example for the board of a club to keep an eye on how things are going. What xG numbers do not do, however, is explain why things are going well or badly. For that, we always need to go deeper.