Training loads throughout the season in the Premier League

The physical demands in professional football have increased in recent years. The game is shifting towards an increase both in the distance that players cover in a match and in the intensity at which they execute their actions. For example, a study1 that analysed all Premier League games from the 2006-07 season to the 2012-13 season, shows how during these 7 seasons the number of sprints increased by 85% (31 v 57) and the distance covered at that intensity increased by 35% (232 m v 350 m) (Figure 1). 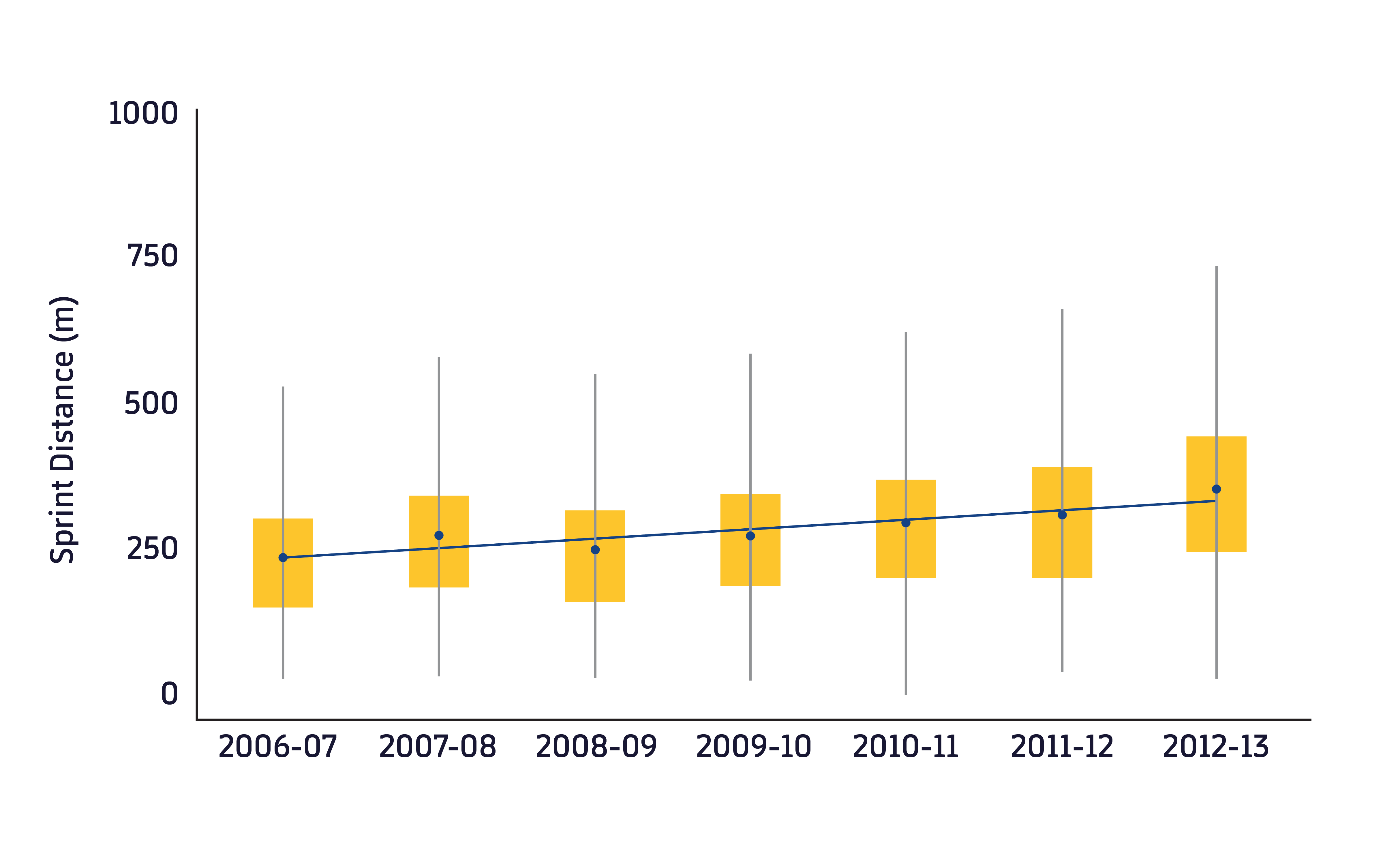 Consequently, coaches and physical trainers design training plans for players to be able to withstand high workloads on a very tight schedule, which in some cases, can include up to 3 games a week. This way, those responsible for planning vary the training load based on the proximity of the match and the evolution of the season itself. For this, it is essential to control the workload, in order to be able to adjust the demands based on the real work of the players. In spite of the importance that planning has in the performance of clubs, there is not much data on how teams make this approach throughout a season. To fill this gap, a recent study2 has been published detailing Manchester United’s week-by-week workload distribution in the 2012-13 season, the year in which they won the Premier League.

Researchers quantified the players’ internal load -obtained from the multiple of the assessment of perceived exertion and the duration of the game or training session- and the external load -obtained by GPS- during the 36 weeks of the competition. All the data was classified into mesocycles (6 weeks set) and microcycles (1 week) in order to have a short- and medium-term vision of the evolution of the season. This is interesting as the distribution of the workload can be assessed according to the closeness of the match, moment in which the players must give their best performance.

The results showed that the internal load and the distance covered were greater in the first mesocycles of the season compared to the rest. In contrast, there were hardly any significant changes in high-speed trainings. It is worth noting what happened during Christmas, where a great number of games are played in a very short period of time. At this point in the season, with the aim to compensate for the increased load of matches, the team reduced the duration of each training session, which caused the lowest internal load, distance covered and distance covered at high speed during the season.

If we look at the weekly evolution, the highest load (both internal and external) was registered on game days and, on the contrary, the lowest was registered the day before. For instance, it was observed that the 3 days prior to the game the internal load progressively decreased by around 70-90 units per day and the distance by 700-800 m per day. Besides, the distance covered at high and very high speed was greater 3 days before the game than the day prior to the match. This decrease in daily load is in line with data obtained from a study3 that analysed the second team of FC Barcelona and which also registered a reduction in distance (~ 3000 m) and distance covered at high speed (~ 170 m) the 3 days before the game.

In summary, these results show how an elite team distributes its workload throughout a season in which it won the championship. The authors of the study and some members of Manchester United Medicine and Science department, highlight the evident periodisation that occurs within each weekly microcycle, mainly focused on the recovery and preparation of the matches during the long and condensed competitive period.