There are two things that the president of the Forest Green Rovers, does not admit in his football club: that players eat red meat, or that fans can buy it at the stadium. But veganism is just one of the philosophies that Dale Vince has passionately embraced. The other is his absolute commitment to sustainability. The company he founded in the nineties, Ecotricity, produces 100% of its energy from renewable sources to supply its customers in the UK. Passionate about sports, he has turned the Forest Green FC stadium into an experimentation laboratory to achieve a building with the least environmental impact, transferring his findings to the rest of society. Now he will go further, turning his club’s headquarters into the first stadium entirely constructed with wood, and therefore, the smallest carbon footprint sports building ever built. 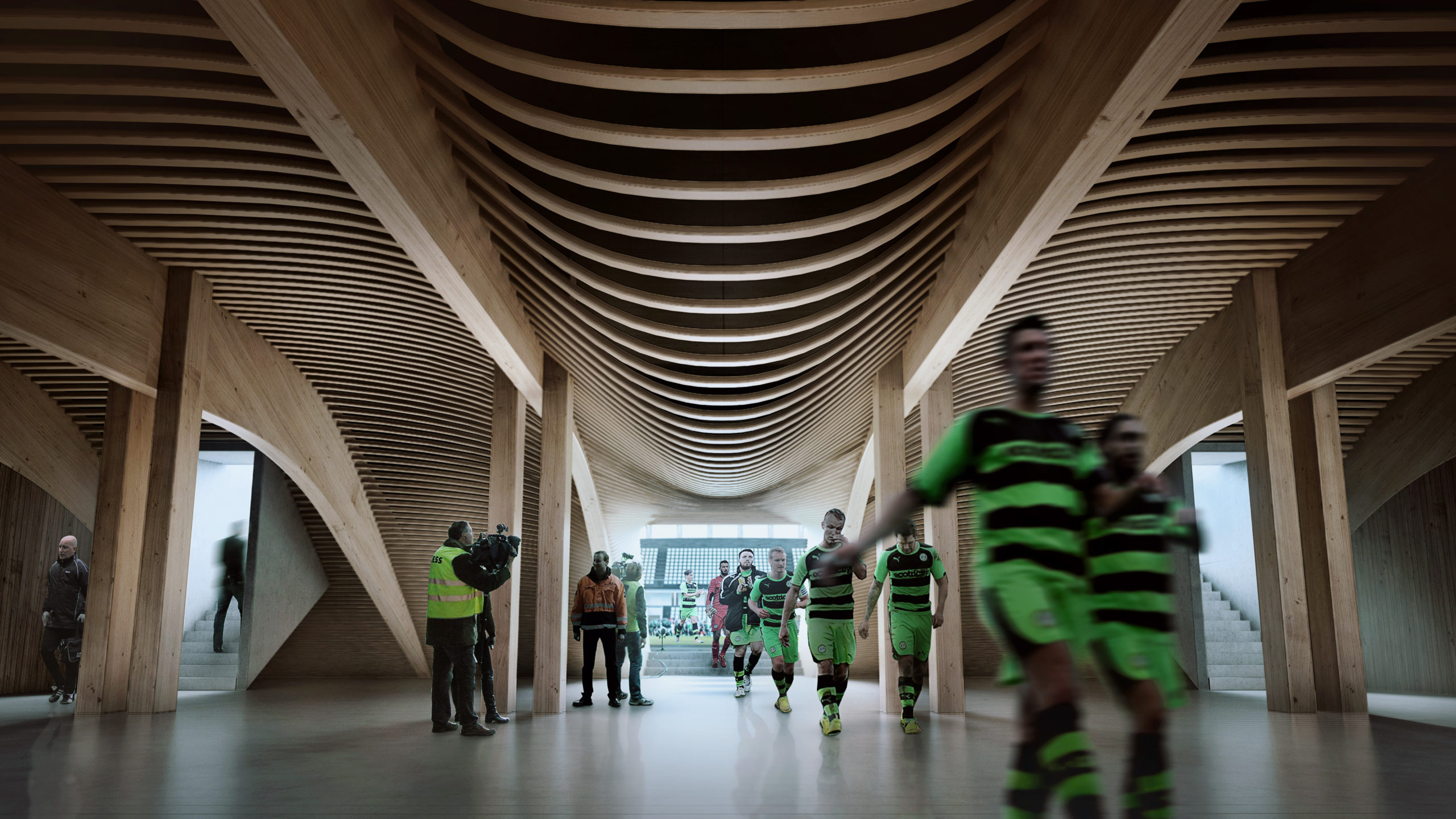 This is at least the categorical statement of the renowned architect Zaha Hadid, whose studio won the international competition to build the new EcoPark. According to her words, “three-quarters of the carbon impact of a football stadium comes from the concrete used to build it.” It is an equation almost impossible to solve: the material par excellence of the construction is unecological, due to the energy that is needed to obtain it from raw materials, and a large amount of water that it requires to process it. But at the same time, it has been more than a hundred years providing optimal structural solutions to architecture. Substituting it, as in this case, for wood, forces the beams to be much closer to each other and sets limits to the building design.

The studio has demonstrated that this does not have to affect a stadium. The grandstand design, very fluid, will guarantee optimum vision for all attendees, with a separation of just five meters between the grass and the first row of seats. Entrances, accesses, and spaces for accessory facilities, such as food courts are similar to those of any other stadium. Designed for 5,000 spectators, it will allow future expansions to double that capacity. The use of wood, from sustainable forests, is not even limited to the structure: the floors, stands, seats and the rest of the elements of EcoPark will be made using this material. 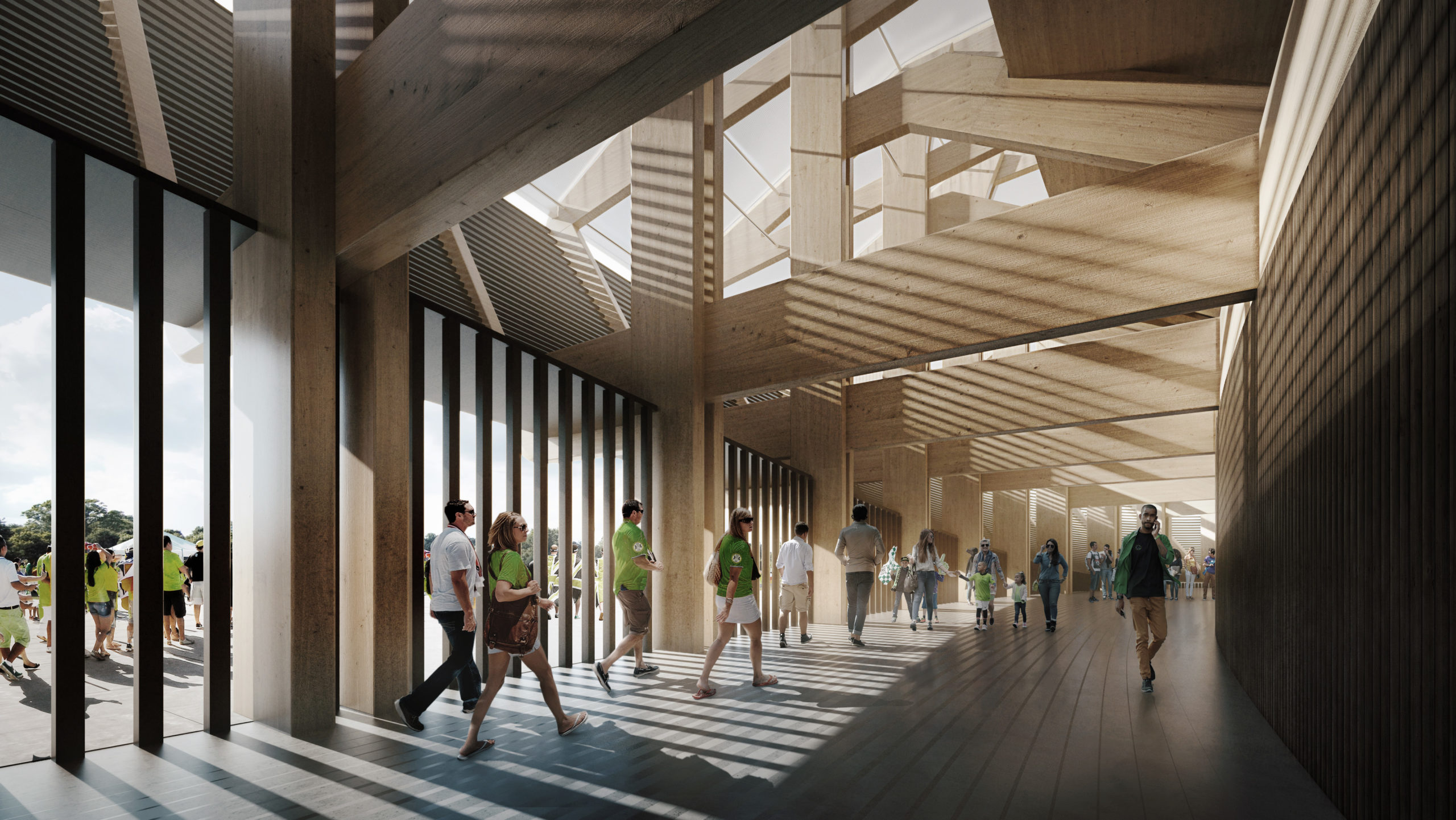 But the interesting thing about this stadium is not only its architectural project, but the management challenges posed to the club’s management team. The challenge was threefold: respond to the President’s aspirations, meet the demands of Gloucestershire County and the town of Stroud in which it is located, and make the project economically viable. Difficulties that explain why Zaha Hadid won the contest in 2016, but Forest Green did not get a building license until late last year.

The first difficulty was the dimension of the project itself. The EcoPark responds to the modern concept of a comprehensive stadium, including both the building where the matches are held and a sports science centre, training facilities and a business park for green technology companies, with commercial and industrial offices built sustainably. This idea will make the stadium profitable both on matchdays and the rest of the days of the year. An ambitious idea that collided with the mayor of the city of Stroud, headquarters of the club.

The tradition of urban planning licenses in the United Kingdom requires that any project, from a house to a stadium, receives approval by the majority of its neighbours. The five thousand seats and the business park could mean, especially on matchdays, traffic jams on the nearby M5 motorway, and therefore, inconveniences if the Forest Green did not properly manage the parking and accesses. Besides that, it faced the challenge of erecting a stadium in the AON environment, Areas of Outstanding Natural Beauty. Special landscape protection areas that intend to keep intact the appearance of the English countryside. Consequently, it was necessary to convince the city council and the neighbours that they were not going to saturate the city on the specific matchdays and to permanently collapse the roads with the business park. And also, to Gloucestershire County that the stadium itself would not undermine the landscape protection of the AONs surrounding Stroud. 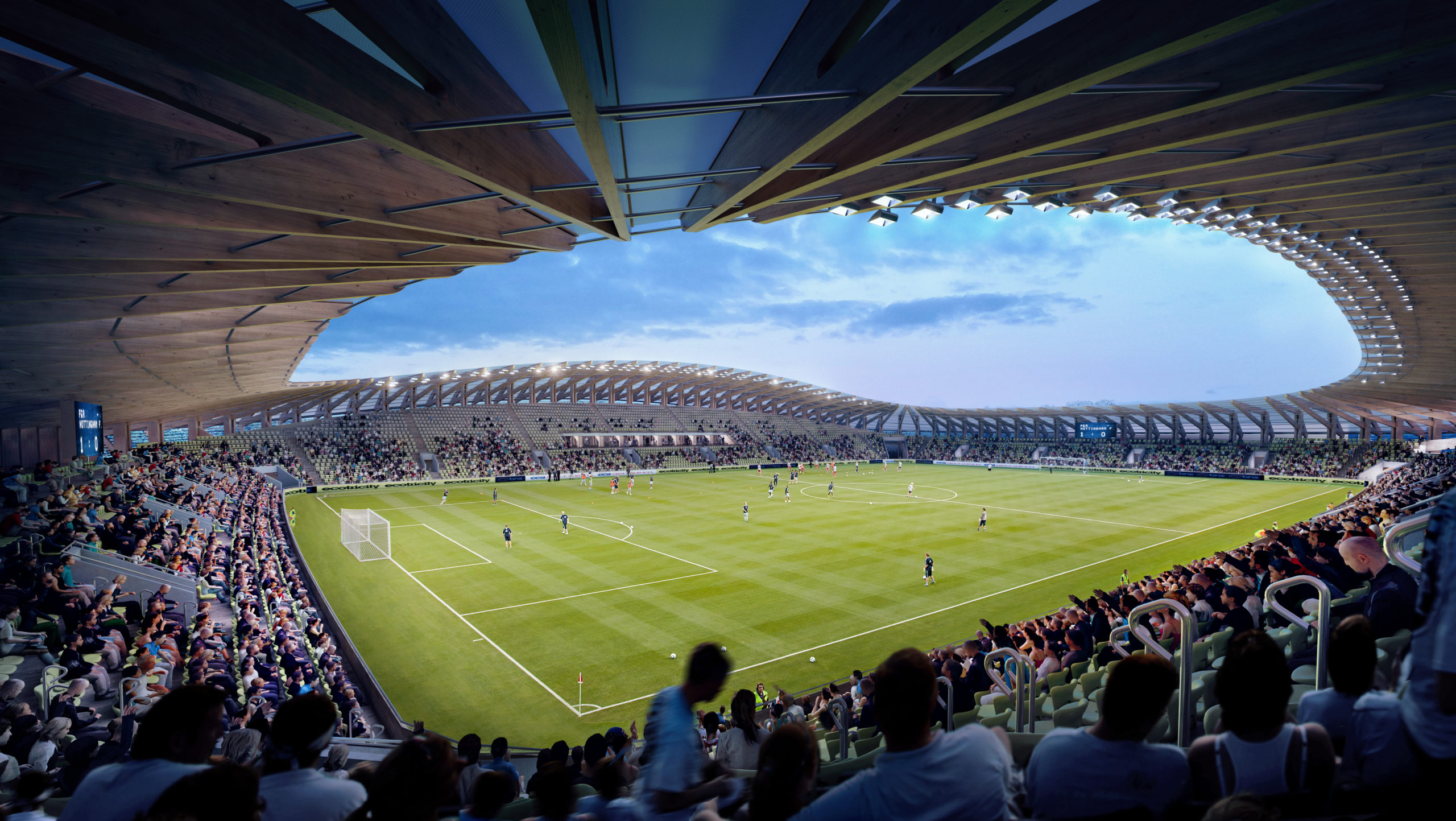 The negotiation has been performed for over three years, listening to the demands of the city while maintaining the original plan, introducing modifications. The work has required reaching agreements with the authorities and transferring their demands to the architecture studio. Finally, a solution has been found that makes everyone happy by accepting a major modification: the stadium roof has gone from being opaque to transparent. The typical sail-shaped structure that characterises modern stadiums, and whose maximum exponent is the “balloon” that surrounds the Allianz Arena in Munich, will allow seeing through when looking at the EcoPark from a distance, respecting the appearance of the landscape.

The next challenge, which will take place within a year, will be to start spending the £ 100m the project will cost. But the most difficult thing is done and shows that currently the construction or reform of sports stadiums is not limited to erecting buildings, but to managing a set of resources and interests from a global perspective.

When choosing among the four most relevant business models in the market in order to manage a stadium, clubs are mainly influenced by two factors: Live sport, Corporate/Business, Event/Shows, and Business/Leisure.

Smart stadiums are a strategy among all of the biggest sports clubs in the world.

Few teams have been reluctant to change the name of their stadiums like the European teams. Giving part of their identity to a brand is something a lot of fans are not willing to do.

Technologies that will define the stadiums of the future

Digital tech is one of the fastest growing areas in sports stadium management.

The IoTwins project, financed by the European Union in its Horizon 2020 programme, will be used to develop an Espai Barça management tool.

A year ago, one of the greatest experts in European football stadiums, Paul Fletcher, published a research about the impact of these buildings to the urban environment. He analysed the cities that had been home to the UEFA Champions League in the last decade, suggesting many interesting insights.

Football has a huge ability to transform society. However, as the greater clubs are the stars of
today, we often look only at the ability of their star players as trend creators, or at the analysis of teams’ sports success.

The pandemic has taken away what is most important within stadiums, the audience.

The long inactivity due to the forced quarantine has taken a long time to be accepted by all of the economic sectors.

In regard to its dimension, the Camp Nou is one of the best stadiums to watch football. That’s what the Fenwick Iribarren architecture firm has considered.

THE 5G REVOLUTION: EXPERIENCING THE STADIUM AT HOME

The 5G revolution, which is the fifth generation of mobile networks, has already started in Camp Nou.

THE MODERNISATION OF STADIUMS BEGAN WITH THEIR ROOFS

Stadiums, a perfect example of classic sports architecture, practically disappeared after the fall of the Roman Empire.

WHY BUILD A STADIUM THAT CAN BE DISMANTLED LIKE LEGO

For the first time in history, there will be a football stadium that can be dismantled and then repurposed or resold.

HOW STADIUMS ARE HELPING IN THE FIGHT AGAINST CLIMATE CHANGE

World-renowned clubs have decided to convert their infrastructure into pioneers of innovation in the field of renewable energies and in reducing their carbon footprint.