The role of psychology in tendinopathy treatment

Sign up for Certificate in Strength Training: From Rehabilitation to Performance

Tendinopathy is a frequent pain in amateur and elite athletes. Its persistence can have a negative psychological impact and, consequently, a difficult rehab.

What is tendinopathy and what is its psychological impact on the patient?

Tendinopathy is often disabling, painful and persistent, and it describes a spectrum of changes in damaged tendons, which cause pain (related to the activity), and reduced function (due to mechanical load).

Even though there are many therapeutic modalities to treat tendinopathies, exercise and loading programs remain the most important and the most effective ones. However, in many cases, the disability could persist over 12 months, producing a negative psychological impact on patients (read reference 1,2 below).

As it is explained in the study of Edgar N, Clifford C, O’Neill S, et al. Biopsychosocial approach to tendinopathy. BMJ Open Sport & Exercise Medicine (2022), on which this article is based, in most of the cases, the disabling effects of tendinopathies have a huge psychological impact which impedes optimal rehab. Luckily, there is increasing awareness of the influence that psychological and psychosocial components, such as self-efficacy and fear-avoidance, have in the outcomes of the rehab of musculoskeletal medicine (read ref. 3). For that reason, a proper approach to the different psychosocial factors could improve its prognosis and outcome.

In the case of elite athletes, especially in football, statistics and research show no particular problems with tendinopathies (even though Achilles’s tendinopathies are more frequent than patellar ones, for example). In any case, this information is uncertain since statistics usually only gather information about injuries when they prevent the footballer from playing games and/or from training.

However, in the case of professional footballers, it’s difficult to reach that point, since every injury or discomfort is monitored and assessed in very early stages, and it’s quickly put under control. What we can find, although epidemiologic studies don’t show it, are players that despite having a persistent pain don’t stop playing and don’t perform at their 100% either.

The case of amateur athletes is different: there is a significant number of cases with long-term advanced tendinopathy that, in many cases, forces the person to stop or to drastically reduce their activity.

Apart from self-efficacy, it has been proven that fear-avoidance also influences rehab outcomes. If the patient enters a cycle of pain avoidance and hypervigilance, disuse and avoidance of the physical activity could lead to kinesiophobia, beginning a harmful cycle of chronicity (read ref. 9, 10).  Besides, this causes deconditioning of the musculoskeletal system,11 predisposing to further injury. 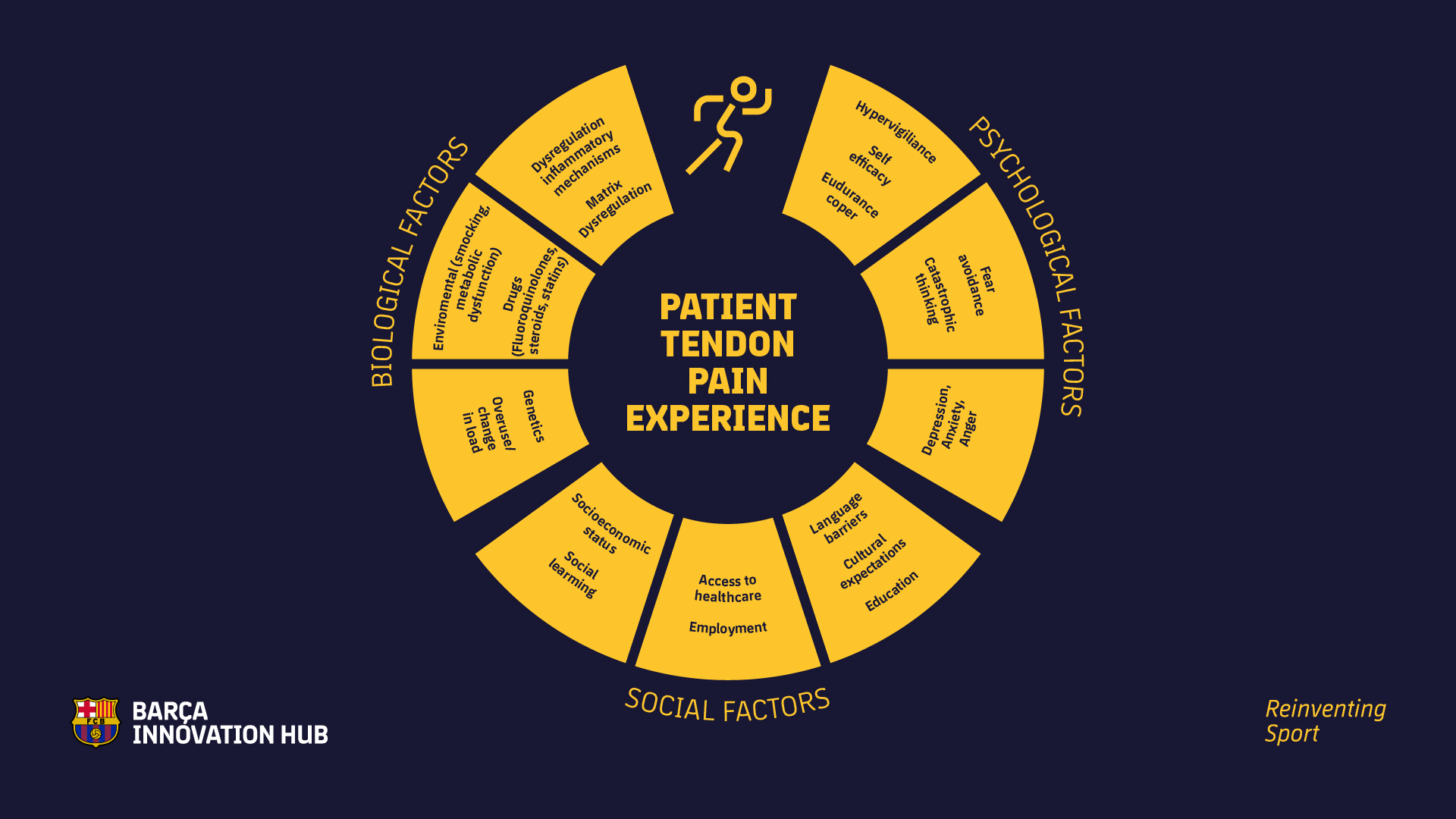 According to the International Association for the Study of Pain (AISP), pain is influenced by biological, physiological, and social factors in variable degrees (read ref. 12). That’s why for the medical team is key to understand how those psychosocial factors could affect tendinopathy to educate patients about the possible influence they have on the pain experienced.

It’s also important to raise awareness in patients that not all the pain experienced is harmful, and that, in tendinopathy, the presence of pain is acceptable during rehab (read ref. 13). Self-efficacy may improve if individuals understand that the pain they experience is not likely to be causing further degeneration of the tendon. Taking all of this into account, it’s possible to reconsider the pain perception patients feel (read ref. 11).

However, for this approach to be effective, it’s necessary to have a close trustworthy relationship between the medical staff and the patients, to identify their barriers, and to understand the acceptable pain response of each of them (read ref. 14).

Patient education’s goal is to provide them with a greater understanding of the condition they are suffering (read ref. 15). In chronic conditions such as tendinopathy where loading programs are the initial treatment, educating patients is key to get optimal outcomes (read ref. 3). This element could be referred to as health literacy defined as patients having the ability to seek, and act on information relating to their health (read ref. 16, 17).

That is why the goal of successful patient education should always be patient empowerment, whereby the patient has the ability to largely self-manage their condition.

One of the main difficulties in loading programs to treat tendinopathy is that more than 50% of the patients abandon the treatment, which further perpetuates chronicity. Patients should understand how the program will benefit them, and it will be necessary to break the barriers that prevent adherence. In fact, it has been proven that patient empowerment in tendinopathy is key to facilitate adherence and commitment to the treatment (read ref. 18).

Biopsychosocial treatments recognise and approach biological, psychological, and social factors related to pain and disability. Nowadays, it is considered the most efficient treatment for chronic pain. Even though at present there isn’t solid evidence that analyses how psychosocial factors affect clinical outcomes in tendinopathies, findings in other musculoskeletal conditions help to reach the conclusion that reframing patients’ beliefs in pain and tendinopathy treatments  will reduce the impact that psychosocial factors have on the rehab outcomes.

In this way, it is made evident that the biopsychosocial model that the patient could follow and learn will enable a faster rehab. In fact, a patient’s level of self-efficacy may be a stronger and reliable predictor of non-surgical outcomes than the structural defects that exist in imaging of different medical tests (read ref. 19, 20).