THE MOST MATHEMATICAL OF SPORTS?

At the Barca Sports Technology Symposium, I had the honour of chairing a session about taking data into the field in sports. The three participants were Sergio Oliva (Vice President of Strategy, Philadelphia 76ers), Charlie Rohlf (Statistics and Data Manager at NBA) and Ian Graham (Director of Research at Liverpool FC). The discussion was far-ranging: from whether analytics major place is on the field of play or in the boardroom to how we create metrics for defence and attack contributions. 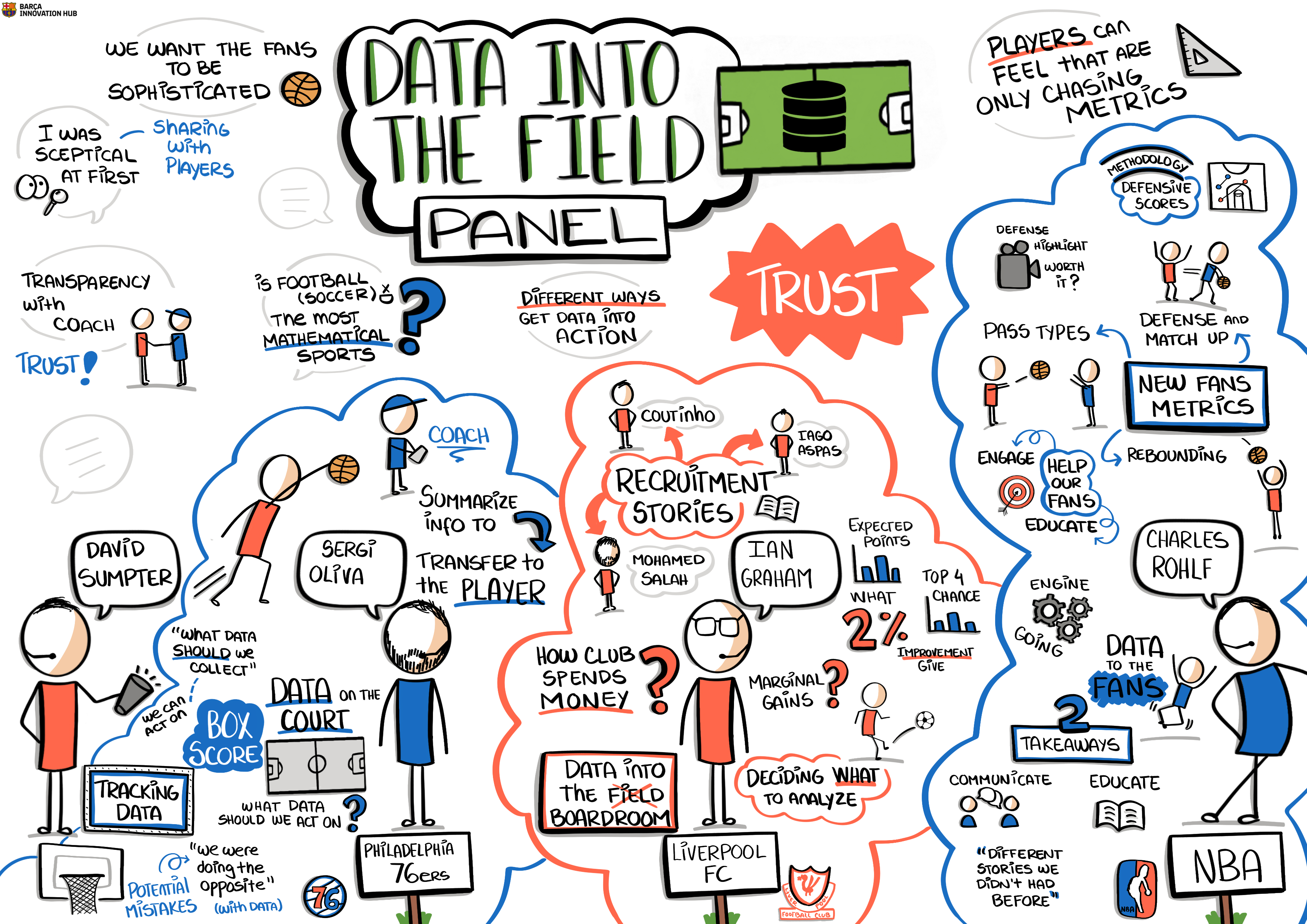 It was powerful to learn from these experts about how they work on a daily basis, but at the end of the session, I had one very different question I wanted to ask. A more philosophical question, but also a question that reveals a lot about how we see football analytics. I wanted to know, “Is football the most mathematical of sports?”

I asked the two basketball analysts first. Sergio Oliva’s answer was to the point. No. Basketball is much more mathematical. His reasoning was straightforward. It was easier to use statistics to describe basketball than football because it was made up of discrete plays. There are 24 seconds on the clock when a team has the ball. This makes it easier to measure the success and failure of various tactics than in football, where plays can range between anything from 1 or 2 seconds to five minutes of sustained possession.

Charlie Rohlf followed a similar line of reasoning. He thought basketball was more amenable to modelling and analysis, and thus more mathematical. But my counterargument to him was that this made basketball, like baseball, more statistical than mathematical. I see mathematics as the science of patterns, and football, because the play is fluid and dynamic, has a wider variety of patterns. Charlie accepted this but pointed out that I was focussing on tactical patterns. If I accounted for the dynamic movements of the players’ bodies, then basketball had just as many patterns as football. In basketball, the tracking data is so accurate that it accounts for body position. Some of Charlie’s own work, automatically identifying defensive highlights in basketball games, captures some of the beauty of sport that sometimes remains unnoticed by those watching. It also helps improve defensive metrics for evaluating player contributions. 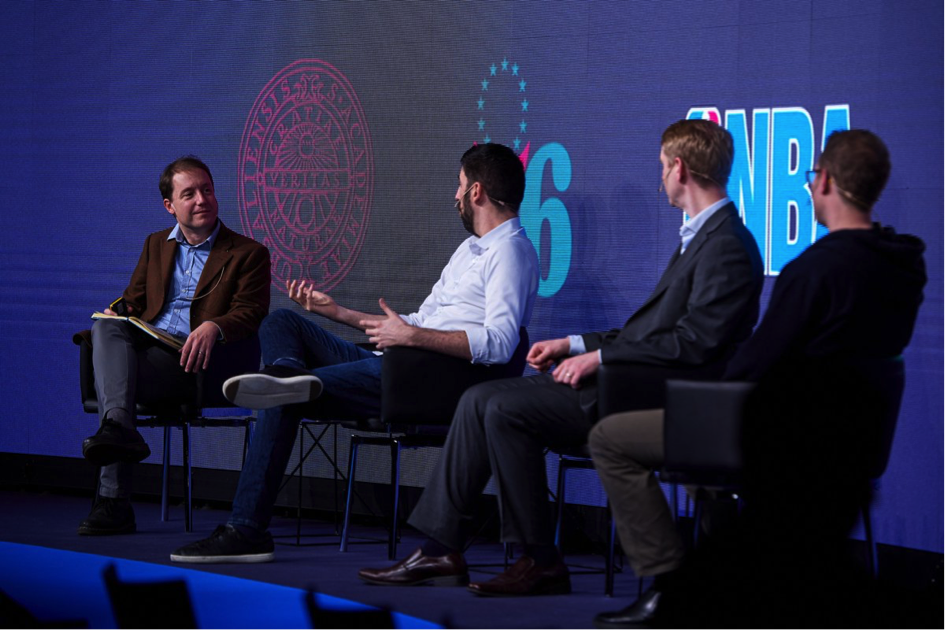 There is, though, little doubt that most of sports analytics relies on discrete statistics. At the Barca Sports Analytics Summit, a day earlier, Dan Cervone talked about his work in baseball analytics at the LA Dodgers. Baseball is the sport where statistics has had the greatest impact, with the Moneyball story of Billy Beane (or was it Brad Pitt?) taking the Oakland A’s on a record-breaking winning streak. Dan explained how the Dodgers use an algorithm to decide the team’s “shifts,” the movement of the fielding positions to account for the hitting profile of the batter. In baseball, every aspect of the game is modelled in terms of discrete events.

Mathematics is more than discrete statistics. The magic of Isaac Newton’s calculus of motion is that it is not constrained to discrete times. So, I was hopeful then that Ian Graham, given his role at Liverpool and his background as a physicist, would support my line of argument. He argued that while a lot of mathematical ideas are more important in football than in other sports, it remains the sport that is least amenable to mathematical analysis. There might well be a future where the full mathematical beauty of football is revealed, but for now, Ian believed the focus should be on making sure we got our numbers right when scouting. His approach to finding the best players was similar to the methods used in basketball, assigning values to their actions. When he explains how Liverpool have used numbers in the recruitment of Salah, Robertson and even Klopp, it is clear that his approach has been successful. But it was more statistical than geometrical.

The debate continued on Twitter after the panel was finished. Lee Mooney, who until recently was head of data insight at City Football (Manchester City group), backed me up by saying that “Baseball, cricket and NFL would be at the more discrete end of the scale [with a] much less energetic geometric data stream.”

I think the distinction between discrete and continuous is part of an answer. But I think the more important point is about the variety of mathematical skills needed to work in the game. At Hammarby, where I work, we use probability to look at expected goals and to project final league position. We use geometry to analyze passing decisions. We use Newtonian mechanics to simulate ball dynamics. We use game theory to think about how to approach next week’s opposition. We use graph theory to analyze passing networks. We use topology to think about how we control different areas of the pitch.

As Chris Anderson, author of The Numbers Game, wrote in our Twitter debate, “There cannot be a ‘right’ approach to modelling decisions and behaviour on (or off) a football pitch. The beauty is the game’s multi-layered complexity, which allows for a multitude of analytical approaches and insights.”

We need lots of different models to understand football, and I would maintain that we need more models than in baseball and basketball, and thus football is the most mathematical sport.

But just when I thought I’d won the argument, along comes Darren O’Shaughnessy, sports analyst at Australian Football club St Kildas, and writes, “Aussie Rules: 18 outfielders, two types of pass, one of which can be marked. Constant substitution, no offside, full contact, majority of decisions under close physical pressure. And lots of lovely maths.”

David Sumpter continues his series on analytics in sports.