THE MODERNISATION OF STADIUMS BEGAN WITH THEIR ROOFS

Stadiums, a perfect example of classic sports architecture, practically disappeared after the fall of the Roman Empire. It wasn’t until the end of the 19th century that the construction of these buildings gained a fresh impetus, with the revival of the Olympic Games. Right up to the start of the Second World War, stadiums were built across the globe for local sports teams, with two main objectives in mind: to hold the highest number of spectators possible and to provide the maximum visibility of the match. The modern stadium would arrive much later, with facilities capable of providing more comfort, improving the fans experience and offering all types of food and leisure options. This concept was the result of a process that began in the mid-20th century when sports club owners began giving more importance to protecting their spectators from the sun or the rain. But this precedent was set by the quintessential Roman stadium, the Colosseum.

This protection was tolerable in certain climates, but it stopped local teams from participating in the big leagues when it was too hot, too cold or too wet. This was the case in Houston, USA, with its subtropical summers, temperatures reaching 36°C and frequent storms, which lead to the construction of the first fully covered stadium in history, the Astrodome. Completed in 1963, its domed roof with a diameter of 220 metres not only provided shelter for its visitors but also allowed the air inside to be conditioned. Although it is now closed for future demolition, it marked a trend that continued in all future renovations and new stadiums around the world. It showed that advances in architecture and engineering allowed any city in the world to host first division clubs.

When the Roman Empire was at its peak, the emperors would put on games that often lasted from dawn to dusk. This allowed spectators to spend the entire day in the stands, and their leaders wanted them to feel as comfortable as possible. To achieve this, the Roman engineers placed a structure on the top of the Colosseum called a velarium. This name is particularly significant since those responsible for hoisting the sails were legionnaires from the Roman navy, the only men capable of handling the complex system of ropes and pulleys.

Another reason why the emperors were prepared to pay for the velarium was the enormous capacity of the Colosseum, which had room for 65,000 spectators, possibly in relation to the number of inhabitants of Ancient Rome, calculated to be around a million people. Most modern stadiums have a capacity of between 50,000 and 70,000 seats, and they are all located in cities with several million inhabitants. We began to build stadiums on a massive scale once again simply because there were urban areas with this huge population density where sports were becoming an important part of leisure. Seeing a match live was the main attraction, and little more comfort was needed. That’s the reason right up to the mid-20th century the stands and boxes only offered protection from the sun and rain to ten per cent of the spectators. 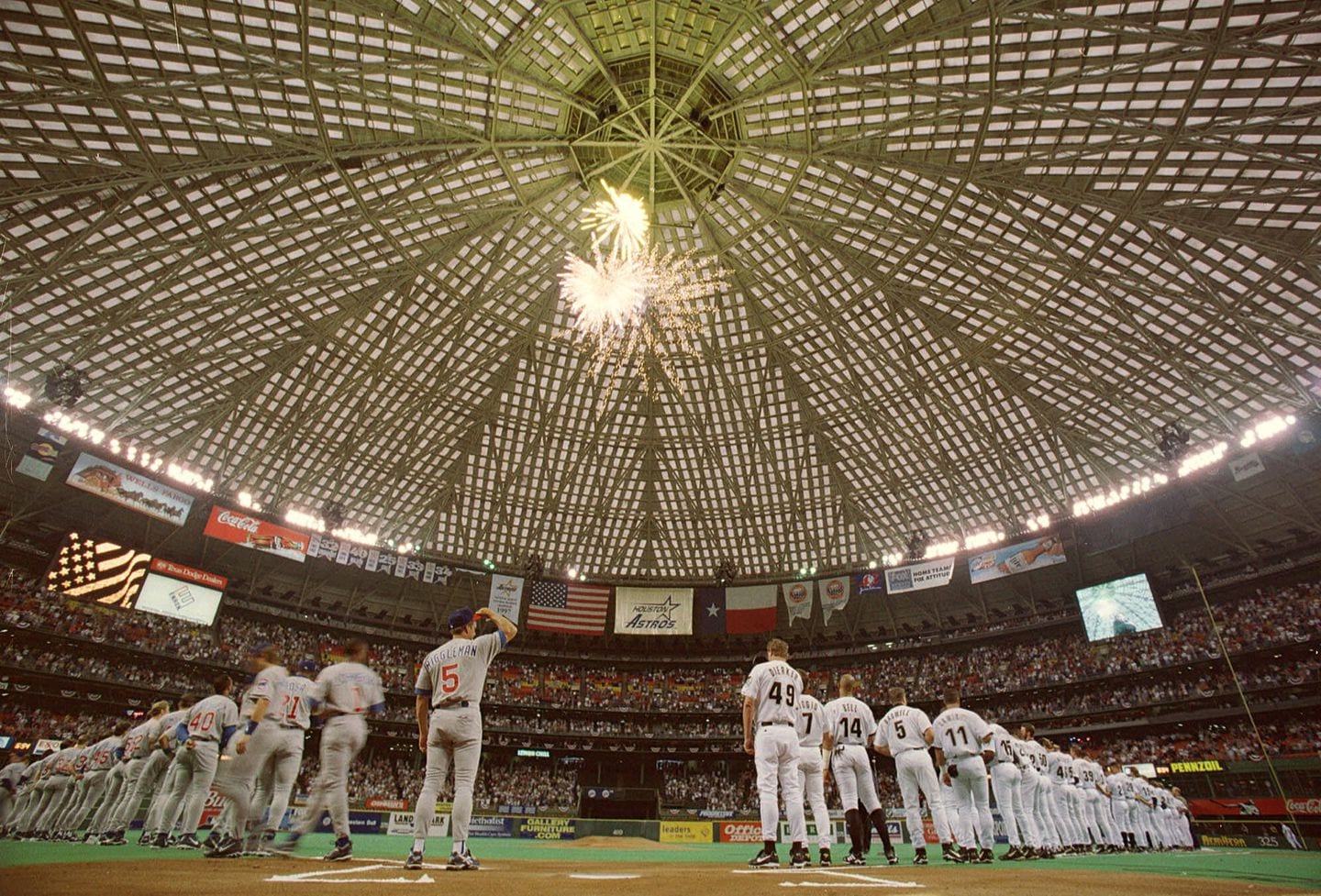 But, not all stadiums needed a dome to protect them from the elements, and for those who chose only to cover their stands, the benchmark was the Dodger Stadium in Los Angeles. Also inaugurated in the 1960s, it was the first to install a roof that did not require columns. Until then all roofs had obstructed the view from some of the rows of seats in the stands, but advances in engineering eliminated this problem. Since then it has been a model to follow.

Domes and covers for shade are now a must for modern stadiums since they are no longer designed as a place to hold a sports event but are instead a venue where the spectator should feel totally comfortable. This can be seen in two recent examples, the Wembley Stadium in London, inaugurated in 2007, and the Wanda Metropolitano from 2017. Both stadiums have paid special attention to protecting their stands.

Wembley’s cover is retractable and can be opened or closed to protect its spectators from severe weather conditions and to allow the grass on the pitch to receive the sunlight it needs to grow.

The Wanda Metropolitano has a fixed structure that covers 96% of the stands. Two steel rings joined by cables and covered with translucent panels allow light to enter and are illuminated at night using a LED system that accompanies events with eye-catching light displays.

It has been a long journey since the Roman velarium, and one that has not ceased to evolve. Using aerospace technology, engineers and architects are investigating the possibility of creating climate-controlled domes to completely cover both the entire stadium and its surroundings. This involves the practical application of projects designed for colonising Mars, and although they have not yet been implemented due to their high cost, they would seem to herald the sporting cities of the future. One where stadium facilities will play an important role, just as the first team.

Sign up for the Certificate in Sports Facilities Management