THE INCIDENCE OF TENDINOPATHY IN FC BARCELONA’S TEAM SPORTS

Tendinopathy, which is characterised by the degeneration of the tendon and the suffering of intense pain, is a very frequent injury among athletes and it affects their performance. Sometimes it may require the interruption of sports practice, and in extreme cases, it could mean the end of their sports career. Tendinopathies are estimated to represent approximately 30% of musculoskeletal consultations (Nourissat et al., 2015).

Although its aetiology is multifactorial, the evidence seems to point to work overload as the key element in the origin of pain. Among the risk factors, a load which is greater than what a tendon can tolerate or is able to adapt is considered as one of the main extrinsic factors leading to tendinopathy (Nourissat et al., 2015). Other intrinsic risk factors such as age, sex, and hormonal and metabolic factors, could explain why up to 35% of individuals, in spite of not participating in sports activities, suffer from a tendinopathy injury (de Jonge et al., 2011).

The “sequence of injury prevention model” (van Mechelen et al., 1992) which was published in 1992, explains how we first need to establish the magnitude of the problem in terms of incidence and injury severity. After, the risk factors have to be identified, as well as the injury mechanisms relating it to the type of sport practised. For example, a classic study analysed the prevalence of patellar tendinopathy based on the type of sport and found that volleyball had the highest ratio (45%) followed by basketball (32%) (Lian et al., 2005). This has been the only research so far that has described the incidence of tendinopathies in elite athletes.

Recently, members of F.C. Barcelona’s Medical Department and the Barça Innovation Hub have published a retrospective study of all tendinopathy cases registered with F.C. Barcelona players (football, basketball, handball, roller hockey and futsal) between the 2008-2009 and 2015-2016 seasons (Florit et al., 2019). In total, 843 tendinopathy cases were recorded among the 3,839 professional and lower division players during these 8 seasons. A tendinopathy injury represented 22% of all cases registered by the club during the analysed period. The appearance of tendinopathy was more common particularly in basketball players (70%), professionals (36%), men (23%) and indoor sports (29%). The most frequent type of tendinopathy was patellar (12%), followed by Achilles (10%). Among the 843 cases of tendinopathy, there were 40 recurrences within the same season.

Regarding its effect on the players’ sports performance, most tendinopathies did not cause the player to miss training sessions or matches (64%), and only 5% of the cases meant that the player was inactive for more than 28 days. Among the tendinopathy cases that involved being out of the team’s routine, the average time to return to the sports activity was 7 days, being the long adductor tendinopathy the one that implied the longest period.

Tendinopathies represent a significant number of injuries in team sports, being more common in professional teams than in lower categories, especially in basketball and roller hockey. Finally, the coordination between coaches, physical trainers and medical services is necessary when implementing therapeutic measures from the moment the pathology appears, in order to limit the period that the player is inactive.

These infographics showcase the results from the research: 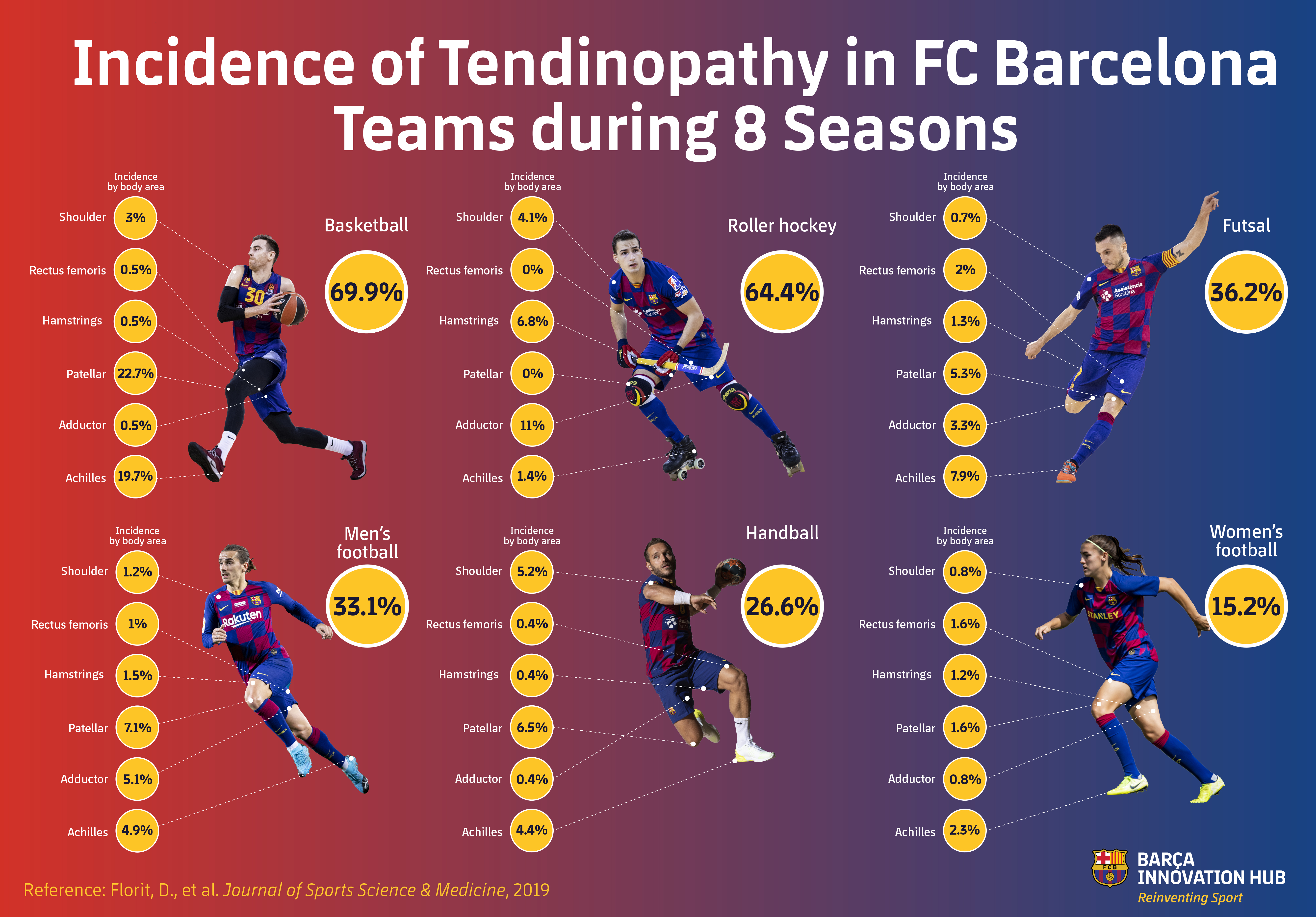 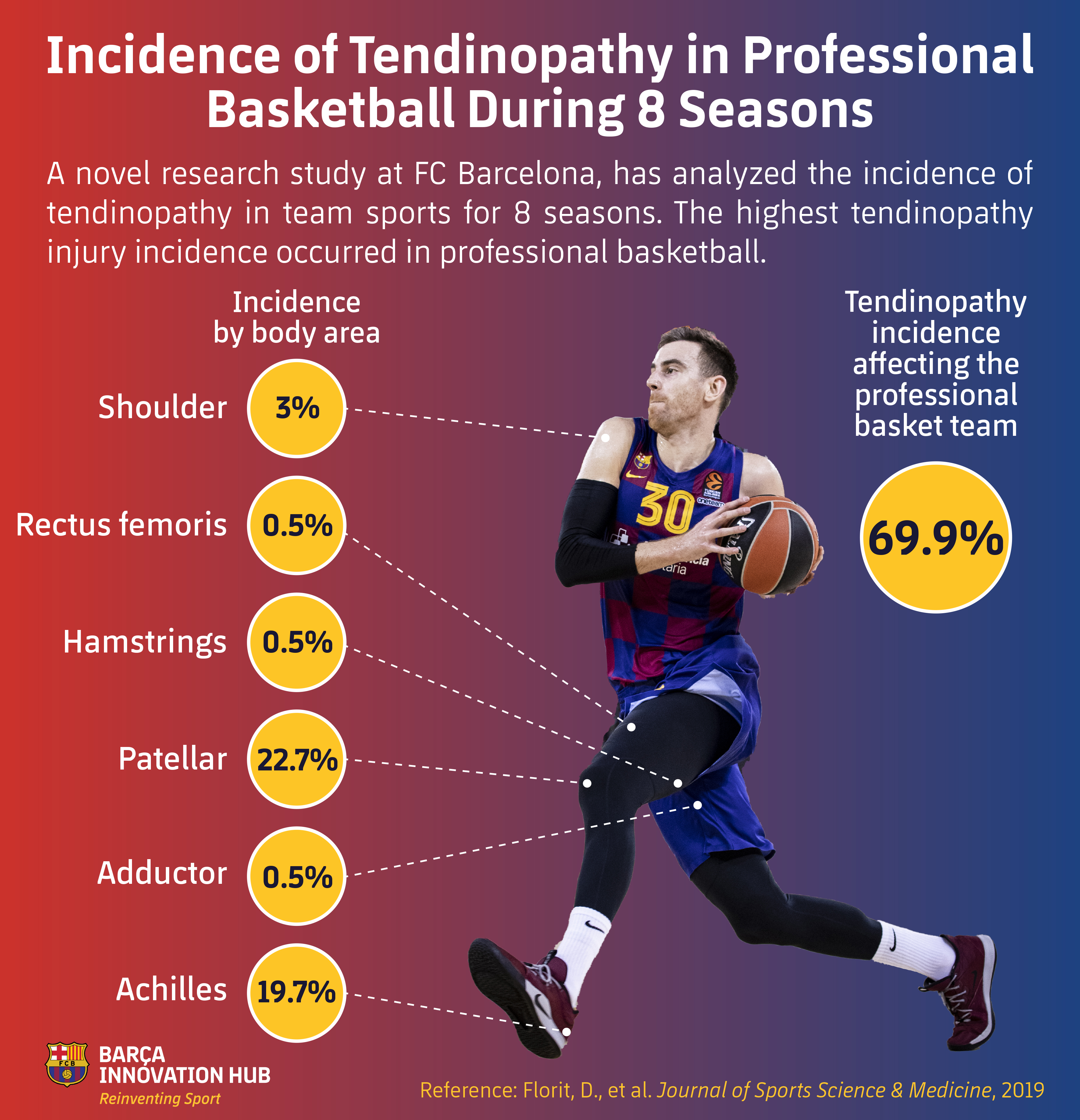 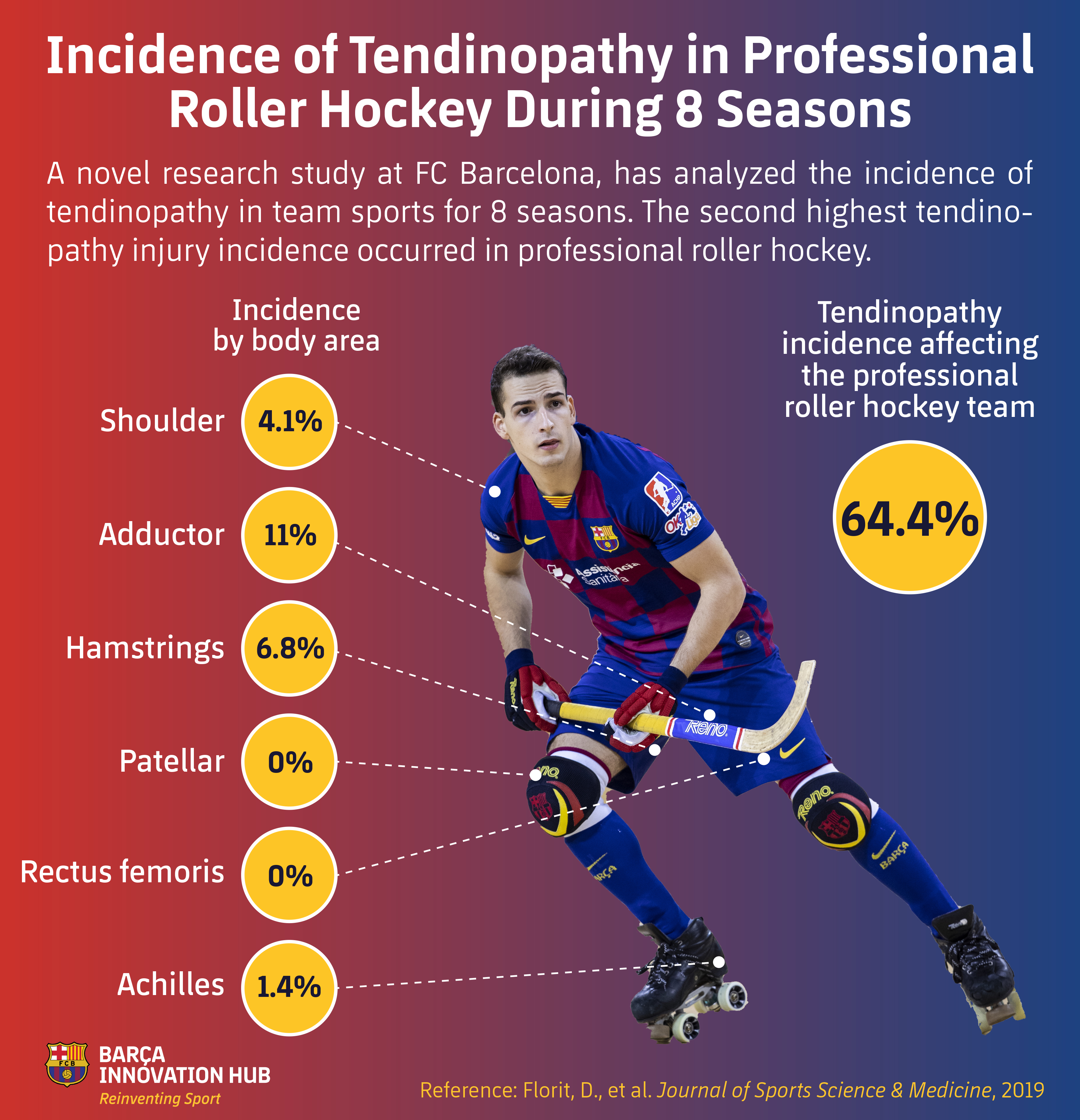 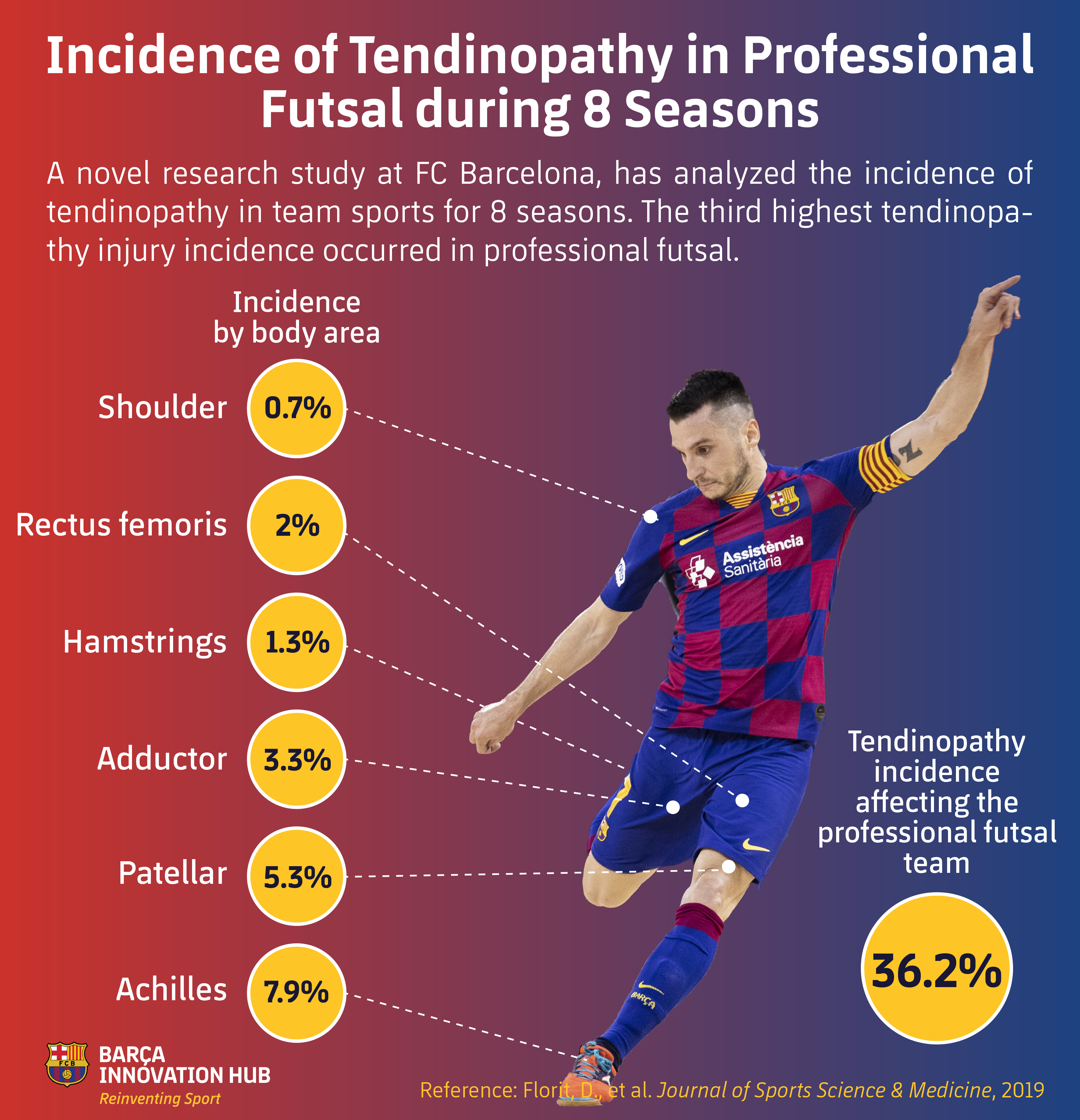 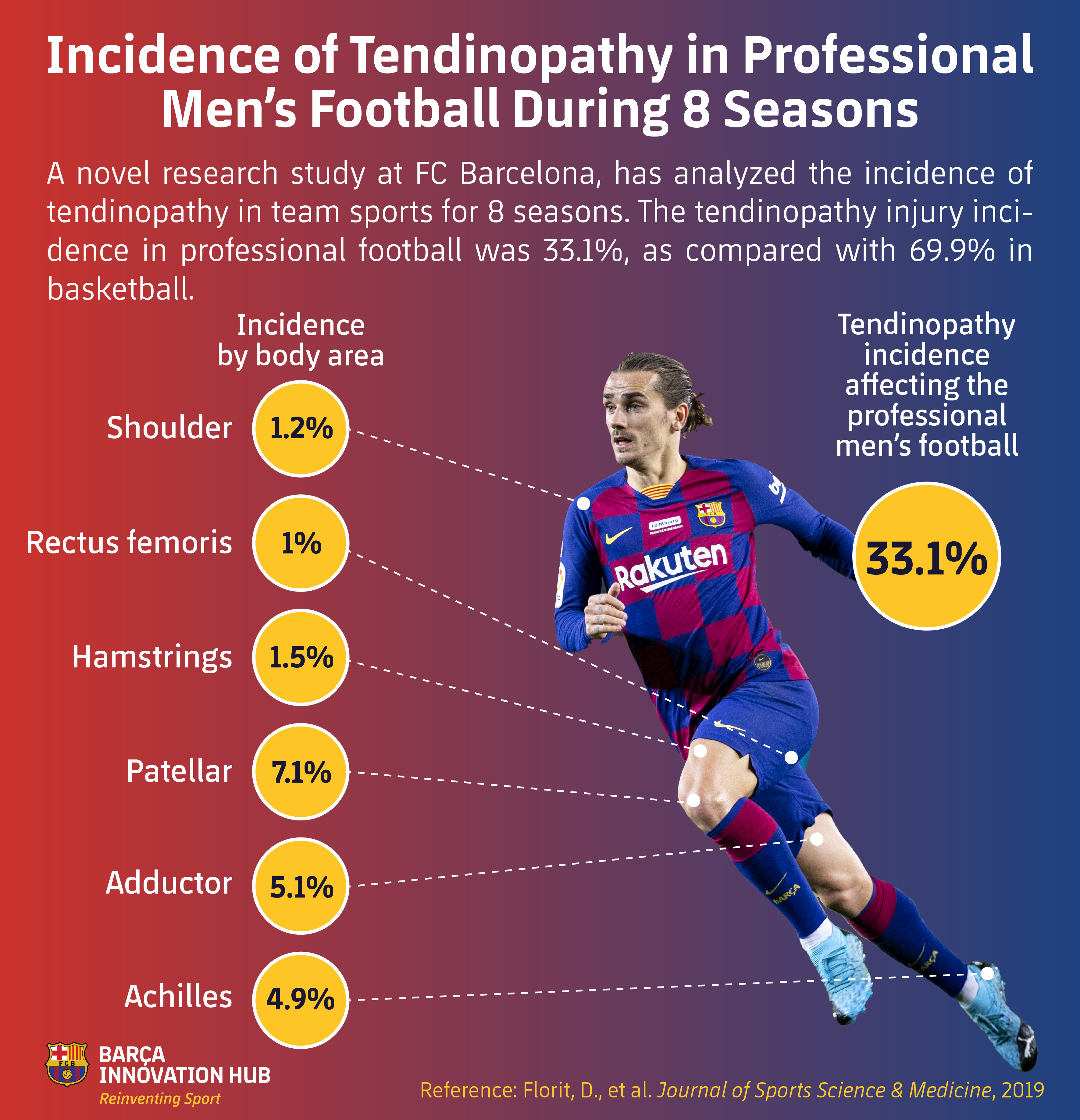 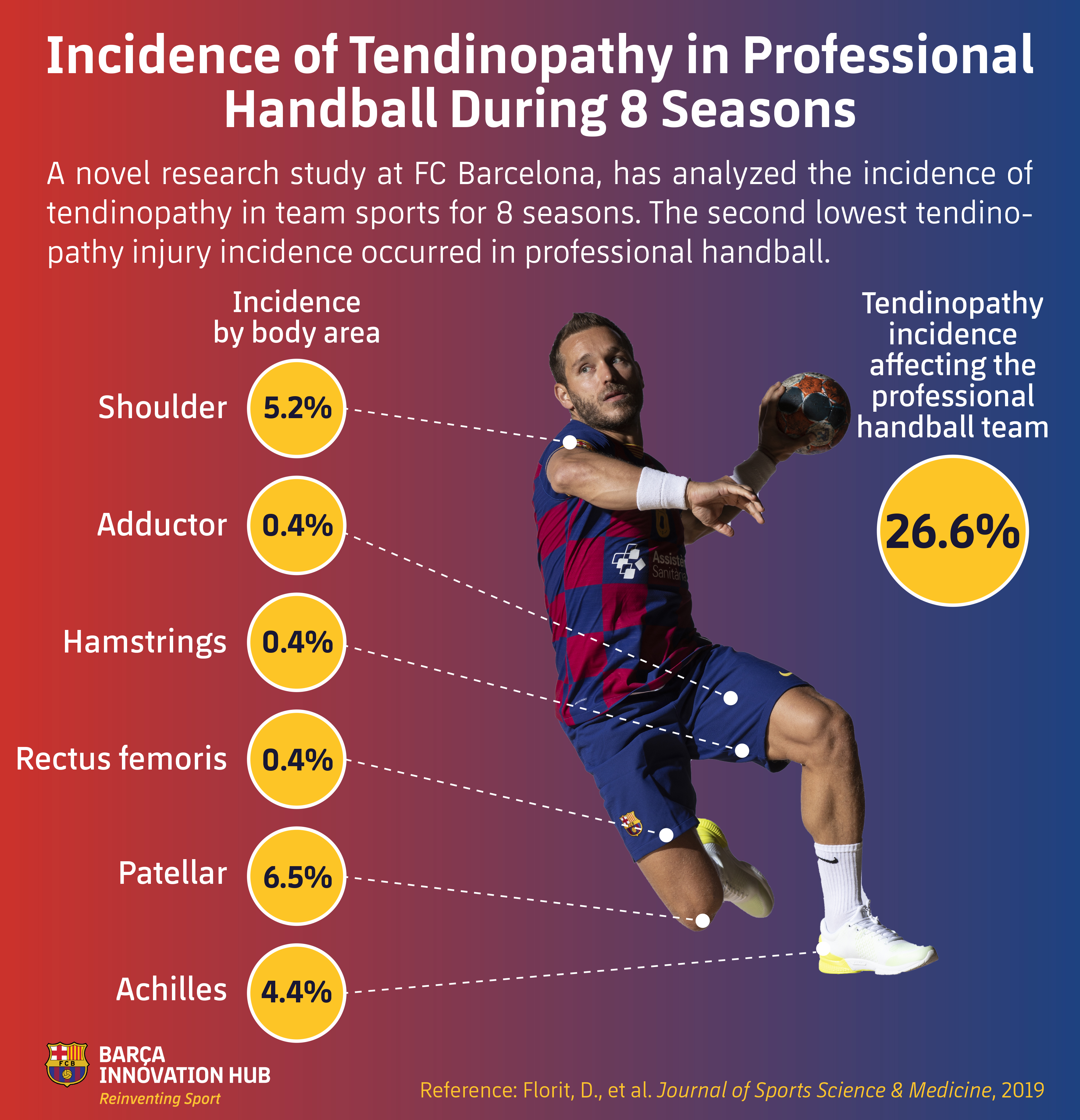 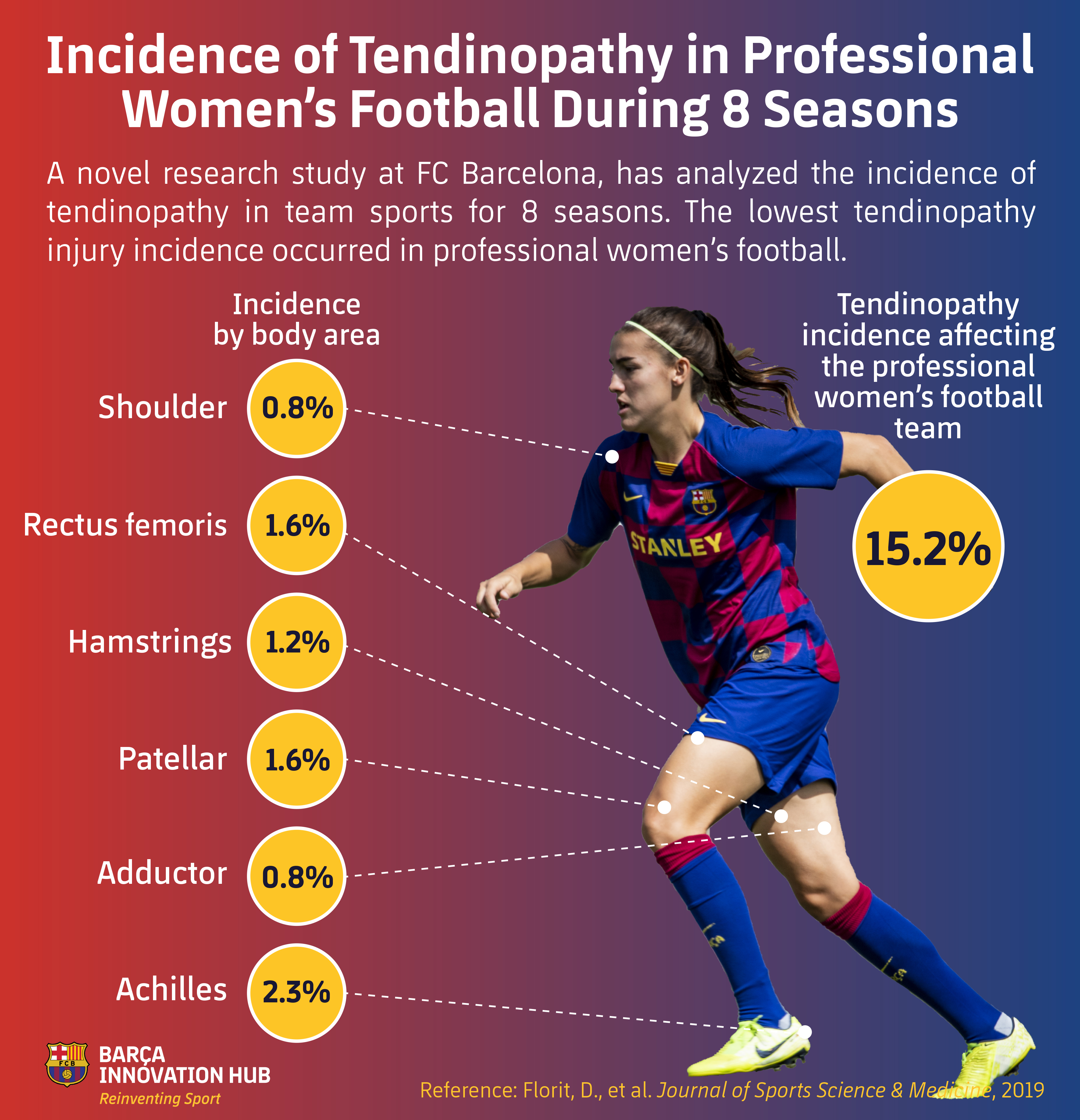