The importance of rest in the performance of young football players

Sign up for Certificate in Neurobiology and Sports Performance

Studying in the morning, training in the afternoon. From the moment the alarm clock goes off to bed time, the day-to-day of a young athlete is marked by a strict routine that takes most of their working hours up. These high levels of activity could lead to a tendency to sleep late which, together with the need of waking up early to go to study the next day, has the immediate consequence of a considerable decrease in sleeping hours. According to the studies of Halson and Juliff (2007) and Watson (2017), young athletes are prone to enjoy a lower quality and quantity of sleep in comparison to the general population.

Even though it is one of the pillars of sports performance, many young athletes face problems getting to sleep, so they don’t rest properly. Unavoidably, this lack of rest has a negative impact on the academic as well as on the sports performance. Many key aspects are affected, such as physical and neurocognitive performance, injury incidence or mood regulation. It has been scientifically proven (Halson and Juliff, 2017; Malhorta, 2017) that these aspects undergo a remarkable improvement with the right rest.

Whit this idea in mind, the coordinator of the Comprehensive Athlete Care Service in La Masia, Ana Merayo, led a pioneer research (read reference at the end)  during the 2018/2019 season that assessed the quality and quantity of sleep of its young athletes and its relationship with mood and academic performance. In the research, 261 football players from the youth teams of the FC Barcelona participated. The age ranges were established according to the criteria of the American National Sleep Foundation (NSF), so they were split in 3 groups: 88 participants from 7 to 11 years, 114 participants from 12 to 15 years, and 59 participants from 16 to 25 years. Young athletes had to answer three questionnaires: SDSC, PANAS and SVS which measure sleep distribution, well-being and mood state. In the case of the group between 7 and 11 years, the questionnaires were completed by their parents or guardians. The data gathered from the three questionnaires was completed with the information collected from the sleep diary of each participant.

The quantity of sleep of young football players was assessed using sleep diaries which were completed by the participants every morning upon waking up. These diaries reported data such as onset of sleep, number of night awakenings, and time and reason for waking up. This procedure determined that the average number of hours of sleep of the study participants was significantly lower than that recommended by NSF. At the same time, it showed that older athletes tend to sleep fewer hours than the younger ones.

These results were compared with data from the Sleep Disturbance Scale in Children (SDSC), used to evaluate quality of sleep of the participants by assessing sleep behaviour and disturbances.   The questionnaire consisted of 27 items expressed in the Likert-5 scale in which the higher the punctuation, the worse the quality of sleep. From the data collected, it was determined that quality of sleep exceeded 39 points, which is the threshold for sleeping disorders. The SDSC scores obtained for participants >14 were significantly higher than those aged 7-11 years (35.59 points). Even though the results are slightly different in relation to the ones obtained from the sleep diaries, it could be confirmed that sleeping a few hours is related to poor sleeping, being more evident in older players. 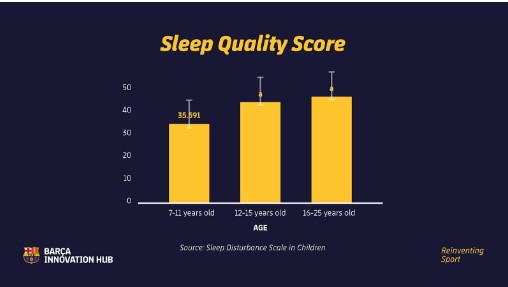 The data collected in the sleep diaries and the SDSC questionnaire were compared with the results from the SVS and PANAS questionnaires (used to measure well-being and mood state). In this comparison, the results show that the number of sleep hours and quality of sleep inversely correlated with young football players’ well-being.

The results of this study show that young football players tend to sleep less and have worse quality of sleep than recommended. The immediate consequence of poor rest is the negative impact on academic results, and fields like mental acuity and neurocognitive abilities, which are key in learning and performance suffer.

On the other hand, the correlation between quality and quantity of sleep are key in the mental and physical development of young football players, especially those under 18. Even though they knew its importance, the study showed that the participants slept fewer hours than recommended and their quality of sleep, as evidenced in SDSC questionnaires, was lower.

All in all, the study brought light into rest importance in physical and academic performance in young athletes. From the 261 football players that participated in the study, the best results regarding quality and quantity of sleep were obtained by those with better academic performance.

Dai Sugimoto & Gil Rodas (2021): Quantity and quality of sleep in young players of a professional