One of the greatest challenges in the favelas of Brazil is ensuring that children and youth stay in school. As Pedro Paulo Ferreira, president of the Residents Association of Morro da Mineira, one of the many favelas surrounding Rio de Janeiro explains, education is an essential achievement if the harsh conditions in which they grow up are to improve. But education is not the only thing, he warns. It is almost equally important that children have spaces in the neighbourhood where they can spend their leisure time without falling into delinquency. Football stadiums are especially important because football is the king of sports in Brazil; it is played all the time, everywhere.

In Morro da Mineira, it was impossible to play it. The ground in the old stadium was essentially unplayable, and the terrace coverings were riddled with bullet holes. When the stadium was finally restored, it was done in a completely new way. “Throughout my life, I had heard about kinetic energy”, states Ferreira. And that was the key.

Ferreira, along with all the students from the schools in the favela, became active participants in restoring the pitch, learning concepts such as alternative energy sources, kinetic energy and applied engineering. The British engineer Laurence Kemball-Cook developed this revolutionary idea, that playing football could produce energy, and he joined the project as a consultant and teacher. First, gathering the participants on the old pitch, he asked them to bounce as a group, jumping up and down on the kinetic surface he installed. The boys and girls began to bounce and jump as they would in a game, but the exercise soon turned into a frenzy of fun and laughter. Then a miracle occurred. The lamp that Laurence held in his hands began to glow. 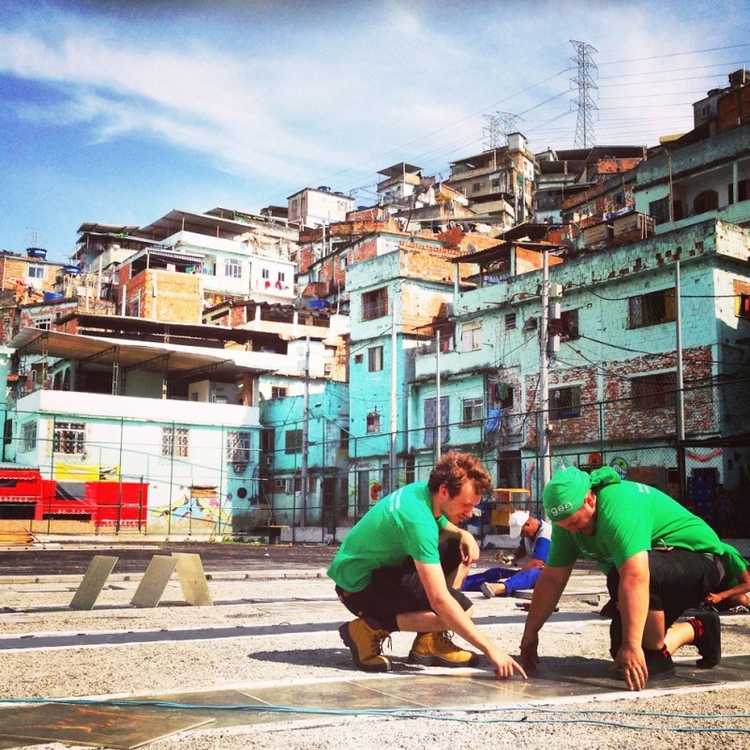 This magic act was followed by an educational workshop in the schools, where teachers explained why our movement generates an impulse – and thus force – while we’re walking or running. The students learned how this force can become energy through a special kind of engineering system.

This system is called Pavegen, a surface invented by Kemball-Cook. It is composed of a series of rubber panels made from recycled tyres. Because they are soft, they compress under the weight of each person who treads on them. This pressure is transmitted to quartz crystals and copper coils that, through induction, can generate enough electricity to illuminate a street for 30 seconds with just one step. With twenty-two footballers running all over the pitch during a match, a great deal more is generated.

And that is what they currently enjoy in the Morro da Mineira stadium, thanks to two hundred of these sheets, installed beneath the artificial grass, which transform the players’ steps into electricity. Along with complementary solar panels and a battery, the pitch can be illuminated for ten consecutive hours with LED panels, even when no footballers are on the surface. Having light in public spaces is a miracle in the favela, and darkness is one of the greatest dangers for those who live there, especially for children and adolescents. For this reason, families, youth and coaches come to use the facilities every night. They are always full of life and football.

The new facilities were completed in 2014, and since then, all of the space surrounding the grounds has become a neighbourhood gathering spot. Small food businesses have emerged thanks to the gatherings, feeding match-goers and players alike. The children’s and youth teams have also developed a feeling of pride for their favela, which encourages them to come to the training sessions on time. For André Rodrigues, one of the coaches, the system “has allowed the favela residents to discover that there are clean, free and safe ways to produce energy. A concept that is so widely taken for granted in developed countries and it is very new in places like here

But what would happen if a technology like this were installed in the stadiums and sports facilities of a big club like Barça? The calculations indicate that the Camp Nou stadium, combined with its training pitches, would generate enough energy in one year to equal three months of energy consumption in a single home. It’s not a huge amount, but if the technology were also installed in areas with more traffic, and exposed to public access, it would reduce the cost of illuminating the facilities. The challenge, at the moment, is the high cost of the installation, around 11 million euros for the main stadium alone.

The company hopes to reduce costs in the future, and the club, in its mission of incorporating new technologies in the world of sport, is keeping a keen eye on the technology as it evolves. Meanwhile, Laurence Kemball-Cook continues to spread the idea of using kinetic energy from football to every corner in the world. Another project – similar to the one developed in the favelas of Rio – was installed in Johannesburg, South Africa, in a neighbourhood where the need for night lighting is equally essential. The passion for football can generate a lot of energy.