The Effect of Motivation in Sports Performance

Sign up for Certificate in Conditioning for Female Football

“Motivation is what leads you to action. It’s the driving force. Without motivation, it’s very difficult to be able to perform at a good level, especially in high performance because a lot of energy is needed to pay the price for reaching really high goals”. According to Rocío Pomares, head of High-Performance Psychology at FC Barcelona, working on motivation with athletes is key, but only when motivation comes from the inside to the outside, and not the other way round”.

Pomares claims that motivation must be trained as if it were a muscle. “Motivation also needs a warm-up”. As an example, she states the importance of choosing well the music before a training session or a game. “If an athlete wants to compete at the highest level, a short warm-up could be playing some music that motivates them”, she claims. This should be a regular dynamic and not just one used for competitions. “It’s not possible not to train and intend to get good results on the important date because, as in the case of a muscle which hasn’t been trained, the outcome is that the performance is not at the highest level”. For that reason, Pomares recommends training motivation regularly, carrying out a warm-up and a training session in all cases. “In this way, on the day of the competition, the athlete can apply what they’ve trained”.

Besides, the head of Psychology of FC Barcelona emphasizes the importance of demystifying motivation in the professional sports world. “In the end, in the professional life, one isn’t always 100% motivated. However, the job can be performed. In life, not all is done with motivation. When becoming adults, actions must be performed out of discipline, commitment to the other and oneself, and out of other motivations that are more meaningful than just the pursuit of pleasure”.

Pomares classifies the types of motivation in three categories:

“Above all, one should draw upon inner and transcendent reasons. Inner ones, such as the satisfaction of managing something difficult easily; the sensation of competing, the feeling one has when our foot or hand touches the ball. Transcendent ones, such as inspiring children or doing something well to honour a beloved person who has passed away: transcendent reasons always multiply performance. In contrast, external reasons such as acknowledgement, fame, or money vanish quickly. Once an athlete loses what has motivated them to practice that sport, everything becomes meaningless. If it’s just money or fame what makes them work, a short career is ahead”. The type of motivation that incentivizes the athlete will also determine their capacity to recover after failure. “If there is inner or transcendent motivation, they can recover on their own. The day of the defeat athletes feel irritable, but then they see it as a challenge, as an opportunity to better themselves. When everything relies on external motivation, it’s very difficult to reactivate them. If one’s action depends on a result, and that result is not obtained, one cannot move on”.

Differences between male and female teams

In this sense, Pomares has noticed some differences in the types of motivation between male and female first teams. “In the male first team, there are many external motivations. As women haven’t had any referent so far to reach the first team, they needed an inner motivation since there was nothing from the outside that motivated them”. Current women professional athletes who have become elite started their professional career without external motivations. Instead, they had low salary expectations, lack of media coverage, and difficulties when facing maternity. According to Pomares, all these starting obstacles mean that those women players who have reached the first team “have a really inner motivation; love and feel passionate about what they do; enjoy doing it and become very competitive. And that is not easy to find”.

That is why, Rocío Pomares assures: “The motivation and force I’ve noticed in women players of the first team is shocking. Besides, in addition to intrinsic motivations they’ve had since they were children and which have taken them where they are today, they have a transcendent motivation: making women remain where they should be. And many times, that’s the motivation that moves them: being one of the women who have fought to make women’ role in society clear”. 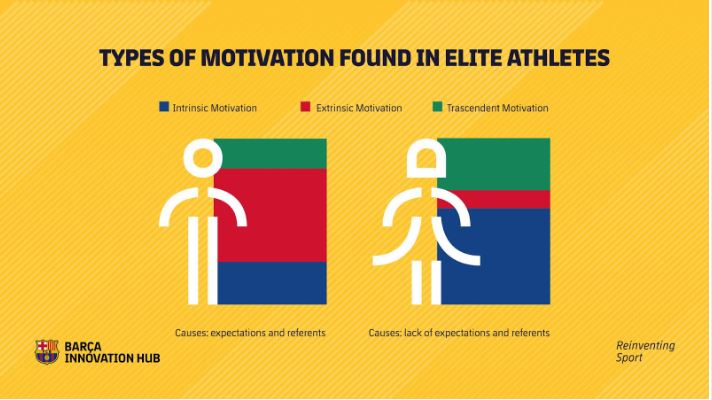 Tools to manage lack of motivation

When accompanying professional athletes in their motivation management, Pomares’ methodology is not only about understanding where motivation comes from, but also how to find it in the action itself. It’s about using what is physical, not just what is rational, to reach motivation.  “Neuroscience has demonstrated that the body and the mind are totally connected. Apart from having five senses, human beings have a sixth sense, known in psychology as proprioceptive receptors.

For example, body posture provides the brain with information about the way we feel. When one is not motivated, the easiest tool is acting. Pretending to be motivated: body posture will send the mind information as if we were motivated, and it will try to find reasons to feel good in an easier way”.

For elite athletes, lack of motivation might be really frustrating. “Sports are quite related to the idea that the athlete has to be very motivated and enjoy what they do. I try to make players not to focus too much on being motivated, but to make whatever necessary to do their job well”.

According to Rocío Pomares, a key factor is the focus of attention, concentrating on what we can control and avoid wasting energy on what we cannot. In this sense, Pomares compares the elite athletes’ profession (or any other profession exposed to high-performance situations) with acting. “The most important thing is not to show that one isn’t motivated”. As she states, “sports are shows, and if the player is getting bored, it shouldn’t be noticed”.