The 87 minutes which determine how good is a player

“What do you do during 87 minutes when you do not have the ball? That is what determines whether you’re a good player or not” – Johan Cruyff

Since wingers and forwards can spend as little as 180 seconds on-ball during a game, what they do when they have the ball accounts for a very small contribution during the 90 minutes the ball is in play. The biggest and most exciting aspect of football analytics just now is understanding how player movements create space, how we can help them improve that movement and (for scouting) measuring how individuals contribute to the team when off the ball.

In my previous article, I emphasized Paco Seiral·lo’s three zones: zone 0 is on the ball; zone 1 is mutual support; and zone 2 is tactical co-operation. In that article, we looked at an archetypical zone 0 player, Adama Traoré, measuring his dribbling skills, and in an earlier article, we looked at how pitch control can be used to improve zone 2 is tactical co-operation. We now focus on zone 1, the mutual support zone. It is here that much of the movement which Cruyff might appreciate the most can be found.

Let’s start with an example. Manchester United’s Marcus Rashford is running down the left wing, and in doing so he opens up a space where he can receive the ball. The red shading in the top part of the figure shows the value of that space.

The value of the space is calculated using a combination of two mathematical models. The first of these is pitch control, which tells us the probability that a pass is successful. To calculate this probability, we model the physics of a pass: will the ball reach its target or will it be intercepted? The second is the probability that Manchester United will score if the pass is successful. This is calculated using a machine learning model. We input data of many previous, similar passes into a statistical model and look at how many led to a goal. Multiplying these two measurements allows us to estimate the probability that a pass to Rashford will lead to a goal.

Importantly, we can assign this value to the run, even if Rashford does not receive the pass or if (as was actually the case for this particular pass) if the pass is weighted poorly and Rashford has to slow down to receive it.

An example illustrating this point can be seen below. Now the player of interest is Luke Shaw, who overlaps on the left wing. The two pictures show how he first accelerates and opens up a space on the left. Again, our model shows the value of the space down the wing. In this case the pass doesn’t come to him, but goes centrally. But the value comes both from the fact that the defenders have to move to close him down, opening up new spaces, and the fact that he provides an additional passing option. 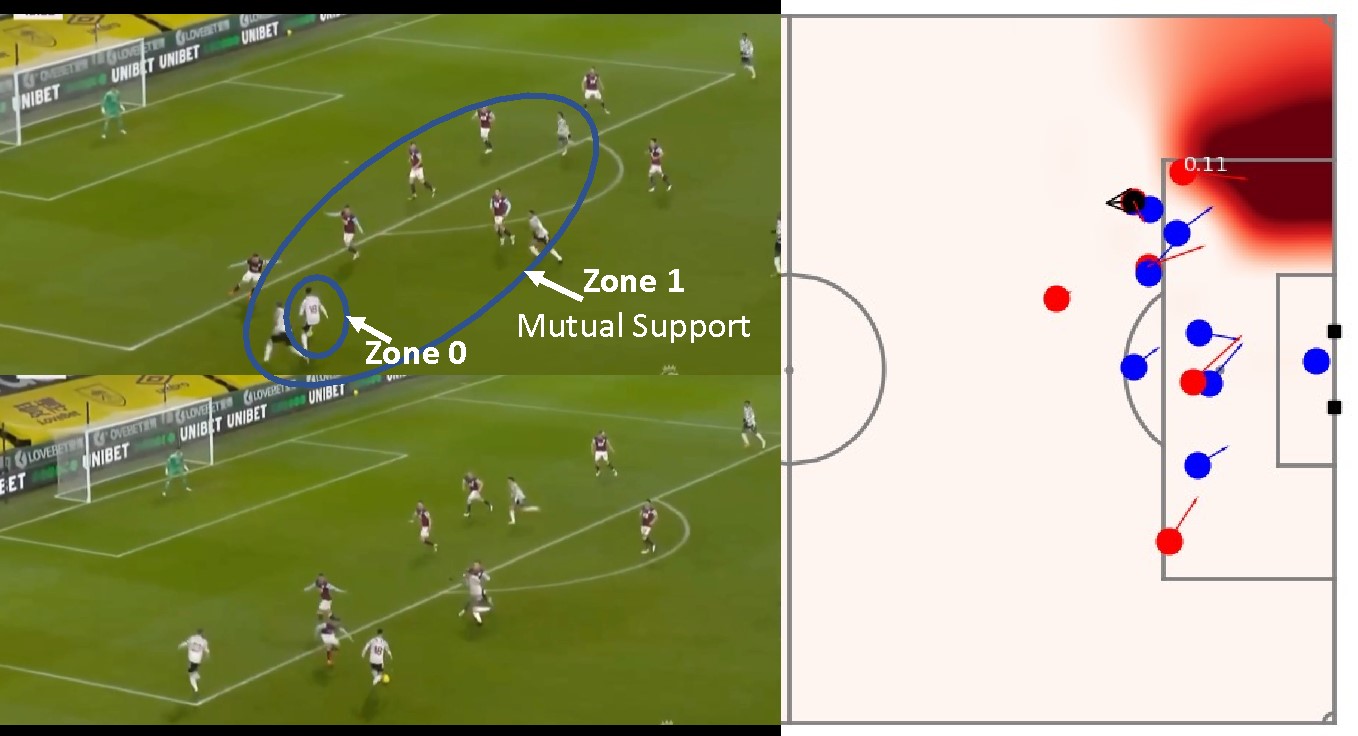 This framework, of calculating the combined probability of the success of a pass and the probability it results in a goal has many different names. In a previous article, which I wrote in 2019 together with Fran Peralta (now Athletic Club’s data scientist), Javier Fernandez (former chief data scientist at Barcelona) and Pablo Pinacres-Arce (Hammarby woman’s team coach) we called it PP*PI, where PP is the pass success probability and PI stands for pitch impact, the probability the pass results in a goal. In another article, Fernandez and his colleagues called a similar measure EPV (Expected Possession Value). These naming differences arise because there are different machine learning methods which can be used to determine the values, but the footballing principle is the same: the higher the value of the space opened up by the player, the better the pass.

For now, I will call this measure Off-Ball Expected Threat, following on from the better-known term, Expected Goals. As we will see in the next article, an Expected Goal is the probability that a shot will be a goal. Similarly, what we have called PI or probability a pass results in a goal, can be labelled as the (On-Ball) Expected Threat. I put the (On-Ball) in brackets because usually we just say Expected Threat in this context. Finally, following on from these two definitions, Off-Ball Expected Threat, is what we have looked at in this article. It is the value created by the movement of a player who does not receive the ball.

Off-Ball Expected Threat is a starting point for addressing Johan Cruyff’s 87-minute challenge. I write about the starting point, because there is still a lot of work to be done. Attacking runs are just one of a wide-range of activities players carry out in zone 1. Remember, football is a complex sport, we have to be modest about what we can achieve. There is no single equation which solves the game. Just some of the examples of zone 1 activities include: pressing in the final third, man and zonal marking in the box, creating pressure on passes in the midfield, running to create space for the ball holder, defending crosses… The list goes on and on.

We will come back to some of these in future articles, but for the aspiring football data scientist, the possibilities for making a contribution here are endless.