Strategies to reduce the negative side effects of travelling on athletes

SIGN UP FOR THE CERTIFICATE IN TEAM SPORTS PHYSICIAN ESSENTIAL CONCEPTS

Travelling is part of the daily life of many athletes, especially among elite athletes. Thus, it is common for athletes to make frequent short trips every week, and even some long trips (> 3 hours). Travelling, although necessary on many occasions, can have adverse effects on athletes’ health and performance. For example, in addition to the fatigue associated with stress and sitting hours, travel often involves changes in time zones with consequent alterations in circadian rhythms (a state known as ‘jet lag’) and is associated with a higher incidence of gastrointestinal problems. It is important to note that the fatigue associated with travel is not necessarily linked to jet lag. Any trip may have fatigue due to numerous factors beyond the change of time zone (physical inactivity, thermal changes, stress, etc.). However, jet lag is a more severe and prolonged state and occurs when crossing several (more than 3) time zones.

Effects of travelling on athletes

Numerous studies have shown adverse effects of travelling on athletes’ performance. For example, a study in rugby players found that in away games (without actually changing the time zone), athletes felt more leg fatigue and general numbness.1 However, the effects on physical performance are often controversial due to possible interference with motivation to compete at home or an away stadium. Another study simulated the conditions of international (24 hours) and domestic (5 hours) travel to avoid this motivation bias. They produced a hypobaric chamber with moderate hypoxia, like in airplanes, and compared these effects with a control condition. The results showed that the international flight (simulated) resulted in a worse quantity and quality of sleep and a worse physical performance in an intermittent sprint test compared to the domestic trip and the control condition. Furthermore, the perceived fatigue was more significant after the international flight.2  But travel can have performance consequences and affect health. A study published in the prestigious British Journal of Sports Medicine analysed 259 Rugby players during a 16-week competition period. The results showed that the incidence of diseases increased after an international trip (> 5 hours’ time difference).3  Therefore, it is necessary to design strategies that minimise the adverse effects of travel on athletes.

However, the scientific evidence regarding the effectiveness of interventions to reduce athletes’ jet lag is quite limited or of poor quality. For example, a recently published systematic review sought to evaluate the effects of different pharmacological strategies (e.g., melatonin, sedatives, stimulants, etc.) and non-pharmacological (e.g., exercise, sleep, nutrition, light) in athletes. After analysing a total of 22 studies, the authors concluded that, although some preliminary studies support the benefits of some strategies, the evidence is generally of low quality and with a high risk of bias.4  Considering the lack of evidence, an international experts panel including doctors, scientists, nutritionists, and physical therapists has recently published a consensus article in the prestigious journal Sports Medicine in which they define some recommendations to reduce the harmful effects of travel and jet lag.5

Strategies to reduce the negative effects of travelling on athletes

Concerning the fatigue associated with trips that do not imply jet lag (usually lasting three hours or less), experts recommend that the primary objective should be to promote rest and, as far as possible, to leave a recovery period after the trip before the competition. For this, strategies are recommended, such as being well-rested for the trip, taking a nap after the trip if possible, ensuring proper hydration, and avoiding the intake of caffeinated, carbonated, or alcoholic beverages. In addition, it is advisable to move frequently and stretch during the flight and reduce the training load when arriving at the destination.

Trips that cross multiple time zones are more complicated, resulting in jet lag. After these trips, the body suffers an asynchrony between the “peripheral” clocks (guided by factors such as light and noise) and the central clocks. It is estimated that it takes half a day to regain complete synchrony for each time zone crossed if travelling west and one day for each time zone if travelling east. During this process, it is common for athletes to present physical fatigue, gastrointestinal problems, drowsiness during the day, and problems sleeping at night. When more time zones are crossed, these problems get worse. It is recommended to adjust the time of sleep and light progressively before starting the trip to avoid these problems. To this end, artificially modifying the light and the intake of melatonin can be favourable. For example, if you are travelling east (where you will have to go to bed “before”), you should receive sunlight as soon as possible that morning and avoid sunlight in the last hours of the day. The application of interventions aimed at promoting sleep (e.g., using an eye mask, helmets, and pillow during the trip, and avoiding the use of electronic devices in the hours before sleep) modify the exposure to artificial light according to the time of day has shown to improve the sleep amount during travelling and the days after. This also reduces the adverse effects of jet lag on some markers of physical performance, fatigue, and symptoms of jet lag.6.7  These strategies should be combined with those mentioned above, including proper hydration, avoiding alcoholic or carbonated beverages, avoiding very calorically dense foods, or moving assiduously during the trip (e.g., every two hours) during non-sleeping hours. In addition, on some occasions, Zolpidem or caffeine intake must be advisable if you want to stay active. 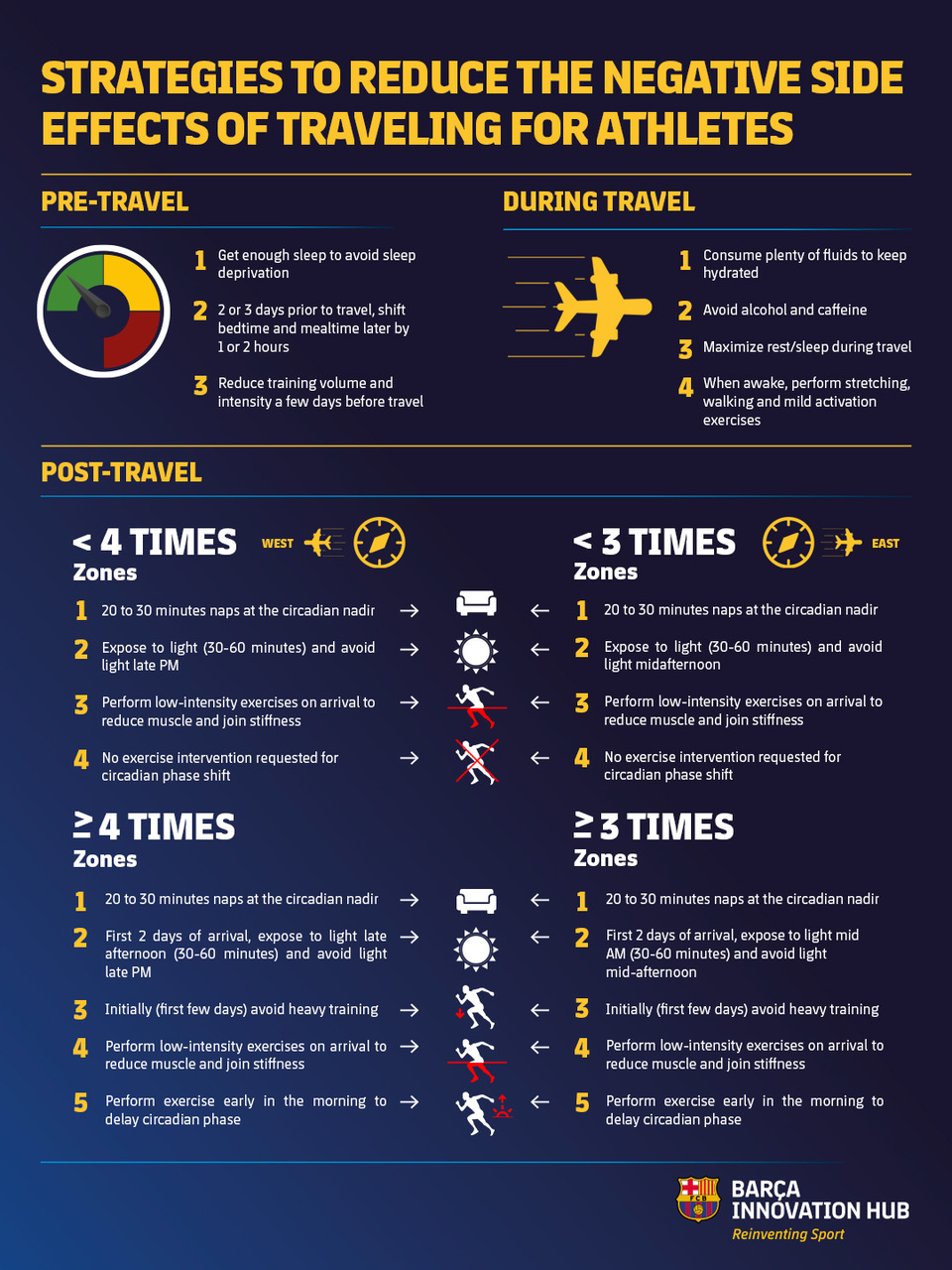 – Travelling can have significant consequences on athletes’ performance and health, especially when they cross multiple time zones. To avoid these effects and especially jet lag, it is advisable that athletes progressively adapt their sleep and light exposure times from days before the flight. However, this is not always possible in elite sports. In addition, other strategies such as promoting rest during and after the flight – trying to synchronise the sleep time with the “night” at the time of destination – and proper hydration will also help to minimise the adverse effects of these trips.

Two years ago, the FC Barcelona medical team decided to operate on the athletes with this type of injury. What were the results?

THE IMPORTANCE OF BIOSTATISTICS IN SPORTS SCIENCE AND SPORTS MEDICINE

Sports Analytics has grown exponentially thanks to IT sciences and it also encompasses other subareas (e.g. sports sciences, behavior sciences, medicine or data visualization) in addition to statistics with a focus that is more tactical and sports performance related.

Two in every one hundred thousand young athletes die every year from what is known as sudden cardiac death. It is a small figure, but every single case is devastating: not only for their families and loved ones, but also for society, which will be in shock at such an unexpected death.