SIGN UP FOR THE BARÇA COACH ACADEMY INTRODUCTORY LEVEL

Currently, one of the biggest concerns for coaches and trainers, and even more so in this period with new coaches’ staff of the teams, is the rapid construction of the style of play in order to permit players to quickly assimilate certain behaviors. The style of play intends to define the behaviors or solutions that the players and the team must implement to be able to meet key football objectives, which are to score and prevent the opposite team to score. This implies that, through instructions and/or training tasks, the players will be able to respond effectively in concrete game situations. For example, when the opposition team applies a high pressure producing a turnover in a given area of the field. Nevertheless, this concept raises several questions: Are there ideal solutions for match situations, which, despite similarities, will never be exactly the same? Should specific behaviors be automated or stabilized, or should we prepare the player to face unpredictable situations? Who will perform better — teams trained to execute and repeat certain behaviors or teams prepared to adapt to changing competitive environments? One of the premises that needs to be clear when trying to answer these questions is that team sports involve processes of cooperation and opposition, where the behavior of players on a team has to be predictable enough for their teammates, and unpredictable enough for their opponents (Hristovski, 2017) to meet specific goals (for example, winning one-on-one situations) and the global goal (winning the match). If we take a look at the upper panels in Figure 1 we can see a situation in which the central midfielder of the first team of Barcelona FC, Sergi Busquets, is trying to give continuity to the play, avoiding the pressure from his direct opponent. In the upper left panel, it looks like Busquets is going to pass the ball  to his fullback’s right. However, if we look at the next second at right we can see that the way he positioned his leg was simply a resource used to communicate false information to his direct opponent. This meant that Busquets’ subsequent dribble was not predicted by his opponent and thus he was able to withstand the harassment and progress with a pass to the opposite side of the field. The lower panels correspond to a game situation in which Barcelona FC usually comes out playing the ball short, using the goalkeeper. In the bottom left panel we can see how the team moves into position as it usually does so that the goalkeeper can pass (the ball) to one of the teammates closest to him. Faced with this common player configuration, the next situation —as depicted in the lower right panel — is unpredictable, with the goalkeeper Cillessen sending a long pass to the opposite end of the field, behind the opponents’ line of defense, which is not very common for Barça, resulting in a more predictable response for some of Cillessen’s teammates than from his opponents. 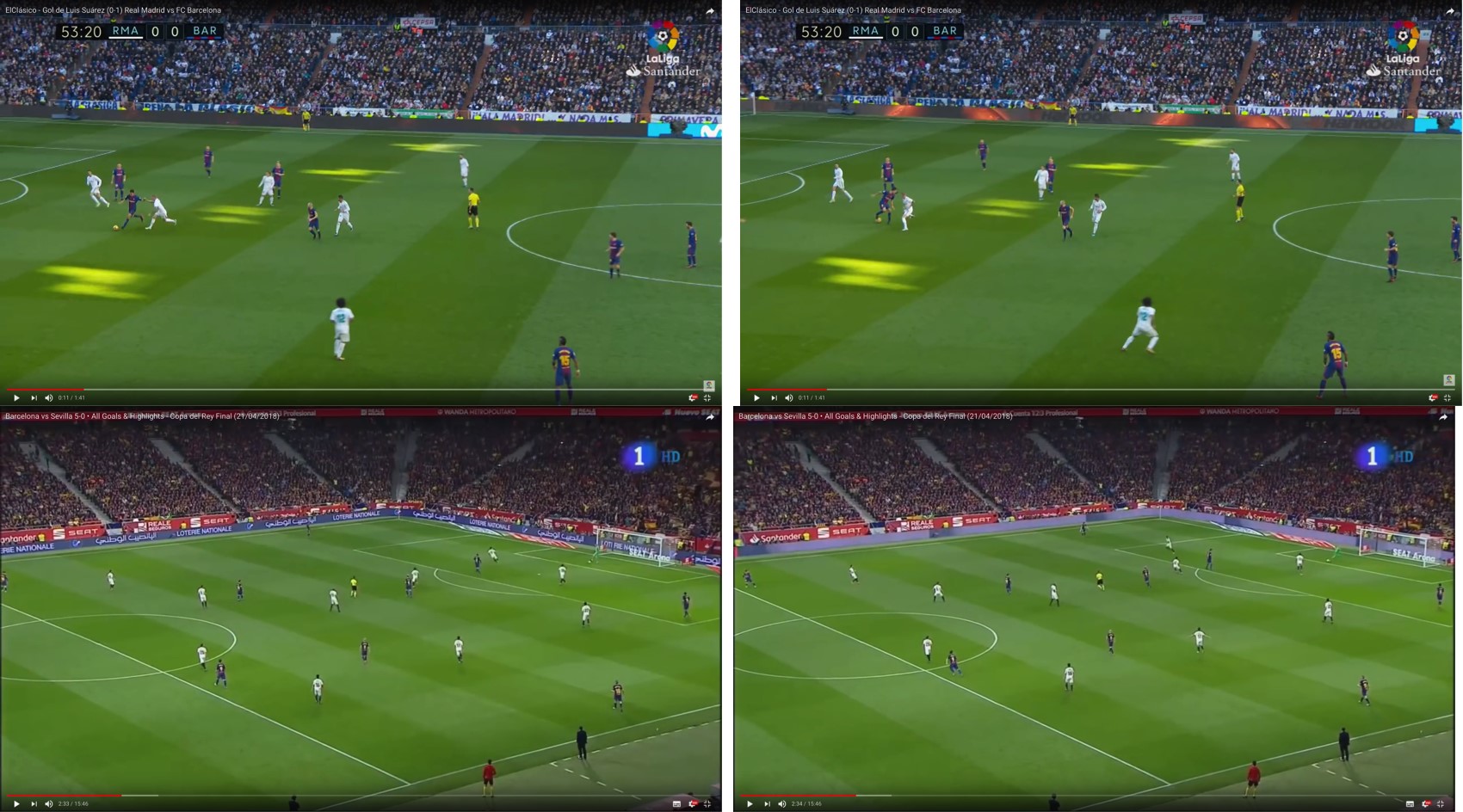 The above examples demonstrate how players and teams self-organize through changes that permit them to modify their own behavior in function of the behavior changes of their opponents, which do not need to be proportional. Therefore, this self-organization is a product of non-linearity. That is, significant changes in the context may result in barely any changes, and small changes in the context may produce significant qualitative changes in a team’s behavior. Non-linearity gives a multitude of possible responses to a task or concrete situation. Thus, a player or a team, like any non-linear system, has the capacity to respond with a vast but finite range of behaviors, rather than just one solution to achieve the same goal (for example, withstanding pressure from the opponent). This behavioral diversity results in a metastable dynamic, where short periods of local stability coexist with long-term global instability caused by the transition between the multitude of explored solutions (Bovier and Den Hollander, 2016). It is important for coaches to understand this, since the metastability level (coexistence of stability and instability) of the system (team or player), will produce behavior that is more or less predictable (unpredictable), which will have important implications for individual and team performance. Training, therefore, should focus on creating situations with abundant information that allow for increased diversity of possibilities to act and thus explore the greatest number of solutions that will be unpredictable to the opponent, whilst still being predictable for one’s own team. In a previous study (Ric et al., 2016), it was demonstrated how specific game situations can modify the number of stable and instable behaviors (level of metastability) in the set of actions that the players perform in specific areas of the field (see Figure 2). This allowed us to conclude that being outnumbered by opponents (situations of numerical inferiority) markedly modified the degree of stability of individual behavior patterns, perhaps excessively increasing the rigidity of certain individual (defensive) behaviors and thus reducing unpredictability for opponents. On the other hand, when one team is outnumbering the other, this provokes increased diversity in player behavior, as well as diminishing the barriers that separate certain more stable patterns, allowing the individual behavior of players to be more flexible and adaptive.

As such, coaches should be seen as “context designers”, rather than simple instructors. Contexts in which a multitude of solutions coexist for the purpose of the task. In general, there is extensive literature that has examined the effects of different training tasks at the physical and physiological level. However, the effects of certain game situations on individual and team behavior are as yet unknown. It is here where sports scientists, with the help of coaches, trainers and methodologists, must work together to understand the effects of their set tasks and training sessions, as well as demonstrate which of these maximize functional diversity, generating more unpredictable behavior during competition.