Sleep, a cornerstone for the athlete’s health and performance

Sleep plays a key role in people’s health in general and, besides, it is an essential biophysiological variable for athletes, because performance and recovery processes are affected by the amount and quality of sleep. Good quality rest is vital for the brain and body health, helping improve the necessary recovery processes after the activity performed during the day. It is so important that the lack of sleep affects memory consolidation, cognitive skills, learning processes, it also alters glucose metabolism and reduces the immune response.1 Furthermore, in the context of the current pandemic, the lack of sleep could be a risk factor, because it reduces resistance to respiratory infections and the effectiveness of a potential vaccine. Therefore, sleep is a factor that determines the athlete’s physical recovery and immune function.

Although it has historically been believed that variables related to training and the ability to influence the athletes’ performance were more important, understanding the physiology of sleep has increased the number of publications analysing its incidence on health and performance in the past few years; more than 80% of scientific publications about this topic have been published in the last decade. 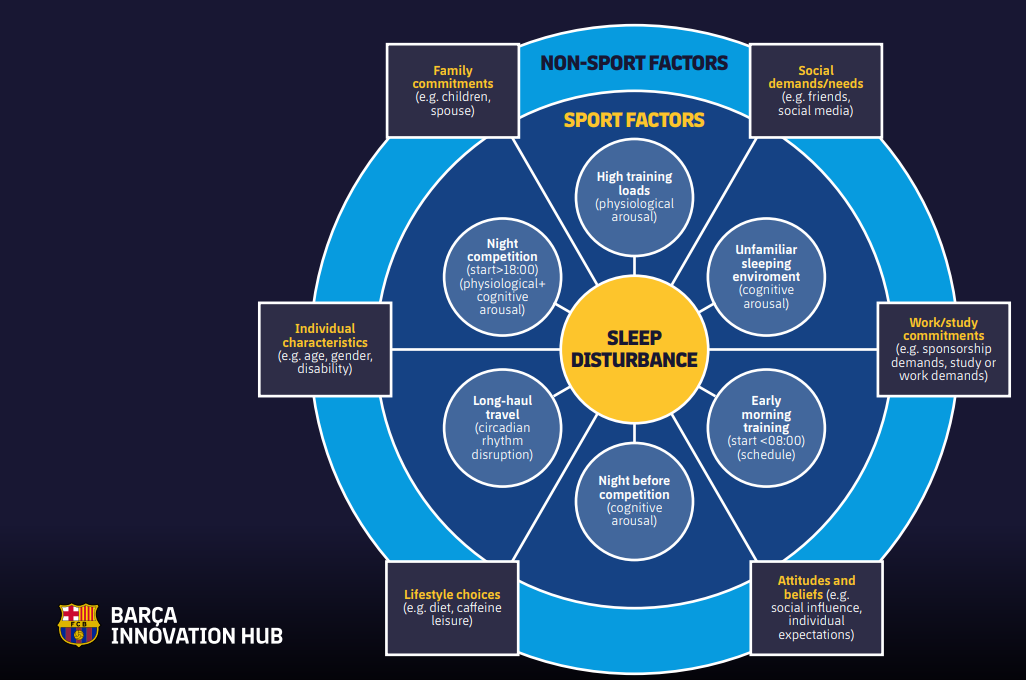 High-performance sports, in which there is physical and psychological stress derived from high training loads involved, the numerous trips, the variability of schedules for training and games, as well as the psychosocial stress generated by the pressure to achieve good results and the addition of other factors such as the influence of social media (which leads to excessive screen time during night time), translates in athletes showing a high inter- and intra-individual variability of sleep quality.4 For that reason, there is a high prevalence of a lack of quality sleep (<7 hours) among elite athletes. Various studies show how athletes themselves state that they cannot sleep well, they are fatigued during the day but have a hard time falling asleep at night. Thus, several studies have suggested that around 50-78% of elite athletes suffer from sleep disturbance and around 25% of them, severe disturbance.

Getting less hours of sleep impacts an athlete’s performance and ability to recover, possibly affecting their abilities that are specific of the sports discipline, the cognitive skills or parameters such as submaximal strength or anaerobic power. Moreover, due to the impact of sleep on the immune function and the nervous system, many studies associate the number of hours of sleep to the risk of injury. For example, a study performed by Milewski et al. that analysed 112 teenage athletes showed that those who slept less than 8 hours on average at night had 1.7 times more risk of becoming injured than those who slept 8 hours or more.11 Another study about the relationship between sleep and the risk of injury analysed 340 teenage elite athletes, and found that those who slept more than 8 hours during the week reduced the possibilities of becoming injured by approximately 60%. Besides, another study that has recently been published analysed basketball players from the NCAA (National Collegiate Athletic Association) showed that athletes suffered injuries more frequently when they had poor sleep. According to the study, an additional hour of sleep was linked to the decrease of the risk of injury by 43% the next day.

Given that the reduction of the quality and quantity of sleep affects athlete’s recovery and their mental and physical performance, how could more hours of sleep affect them? Although there is not enough evidence about it, a recent study performed with cyclists and triathletes showed a reduction of the time trial after three consecutive nights of extended sleep (~ 8.4 hours of sleep each night) in comparison to the athletes’ regular sleeping hours (~ 6.8 hours of sleep each night).14 For that reason, researchers concluded the study suggesting that “endurance sports athletes should sleep more than 8 hours in order to optimise their performance”.

Moreover, there is another way to compensate for lost sleeping hours: napping. These small “sleeping brakes” of 20 to 30 minutes, besides enhancing alertness, concentration, and the state of mind, can also improve performance. For example, a study performed with netball elite athletes showed how napping for less than 20 minutes could improve the speed of jump. Another study performed among healthy men found that napping can improve physiological and cognitive aspects after a partial lack of sleep, and also improve parameters of performance, such as sprints.16 In this sense, there is a concept called “coffee nap”, which consists in taking a dose of 150-200 mg of caffeine just before taking a 15- to 20-minute nap, which may be a good measure for athletes to reduce mid-afternoon drowsiness.

For this reason, sleep is an essential factor for athletes’ health and performance. Due to the high prevalence of sleep-related disturbances among elite athletes, doctors and coaches in charge should monitor the quality of their sleep and anticipate potential situations that could disturb them. Besides, those groups that are more likely to suffer from sleep disturbances should be considered. An example of this is age. Thus, athletes who are 25 and older showed worse results in questionnaires about quality of sleep than those who are younger than 20.17 Gender can also be a risk factor, where women could present a higher prevalence of sleep-related problems.

With all this being said, and according to a review carried out by experts recently published in the British Journal of Sports Medicine, the number of optimum hours of sleep would range from 8 to 10 hours for teenagers, and from 7 to 9 hours for healthy adults.1 However, experts suggest that athletes need even a greater number of hours in order to recover from physical and psychological demands associated with the sports practice.  Therefore, in order to have a good night’s sleep, different sleep hygiene habits could be followed, for example, avoid stimulants such as caffeine, alcohol and heavy foods before going to bed, ensure day light exposure, have a relaxing routine before going to bed (e.g., breathing cycles or meditation), reduce the screen exposure some hours before bed, or be in a fresh, dark, and quiet environment. To sum up, sleep plays a key role for athlete’s health and performance. Doctors and coaches in charge should be aware of the potential disturbances linked to high-performance sports practice and try to anticipate them.