Sauna or hot baths, are they alternative methods for heat acclimation?

Summer is here, and that means high temperatures. Summer means down time for many athletes, however, there are also monumental competitions such as the Olympic Games, World Games, European Championships, etc. It is essential to consider that heat can have significant negative consequences on athletes’ performance, including greater cardiovascular stress (higher heart rate) and greater perceived exertion to the same intensity. A group of researchers observed in elite football players that in matches played at high temperatures (approximately 30ºC), there was more significant fatigue (greater reduction in the jumping ability, which worsened by 6% during the match) than games played lower temperatures. This reflected the impact heat has on performance. 1

However, not all athletes can exercise in hot environments for several days before a competition. In addition, those training days to acclimatize to the heat may require a decrease in exercise intensity, especially the first few days, which could potentially have negative consequences on performance. For this reason, there are other alternative methods for heat acclimation that have gained popularity in recent years and could be more practical.

One of these methods is the sauna. For example, a study conducted on medium-distance runners examined the consequences of stepping into a sauna (90ºC) for about half an hour after training sessions for three weeks. Compared to a 3-week period in which they did not go to the sauna, results showed that runners increased their plasma volume by 7% and performance in a test to exhaustion by 32%.3  More recently, another study in runners showed that three weeks of sauna (between 100 and 108ºC for 30 minutes, three times a week) after training, reduced body temperature and heart rate during a heat tolerance test (30 minutes at 40ºC), in addition to improving the maximum oxygen consumption and the speed to the anaerobic threshold in tests carried out at “regular” temperatures (18ºC). 4

Hence, stepping into a sauna after some training sessions a week appears to be an effective method for heat acclimation, which can even induce benefits at cooler temperatures. However, not all athletes have access to saunas, so other more economical and practical methods such as hot water baths have appeared in the last few years as a promising alternative. A group of researchers from Bangor University, in the United Kingdom, showed through various studies that bathing in hot water (submerging up to the neck in 40ºC water for 40 minutes after the typical training at “regular” temperatures) for only six days is an effective method to induce heat acclimation. This, in turn, reduces body temperature, sweat threshold, perceived exertion, and heat, and improves performance (5%) in a test carried out at high temperatures (33 ° C). 5.6 In a recently published study by this group of researchers, they compared the effects of this method of post-exercise hot water immersion for six days to the method of classic acclimation through exercise, that is, exercise in a hot environment (60 minutes at a moderate intensity, with a temperature of 33ºC and relative humidity of 40%). Surprisingly, the results showed that hot baths resulted in more significant heat acclimation than an exercise in a hot environment, reflected in lower body temperature and a lower sweat threshold when exercising in heat – although there were no differences for other indicators such as plasma volume, thermal sensation, or physical performance -. 7

Before competing in a hot environment, it is advisable to go through an acclimation period. Although this acclimation is usually done by training for several days at high temperatures, recent studies have shown that other strategies such as the sauna or especially bathing in hot water after training (30 minutes immersed in water at 40ºC) for just one week, could be strategies just as effective and more practical. Consequently, we can use various methods at to optimise the performance of athletes even in extreme weather conditions. 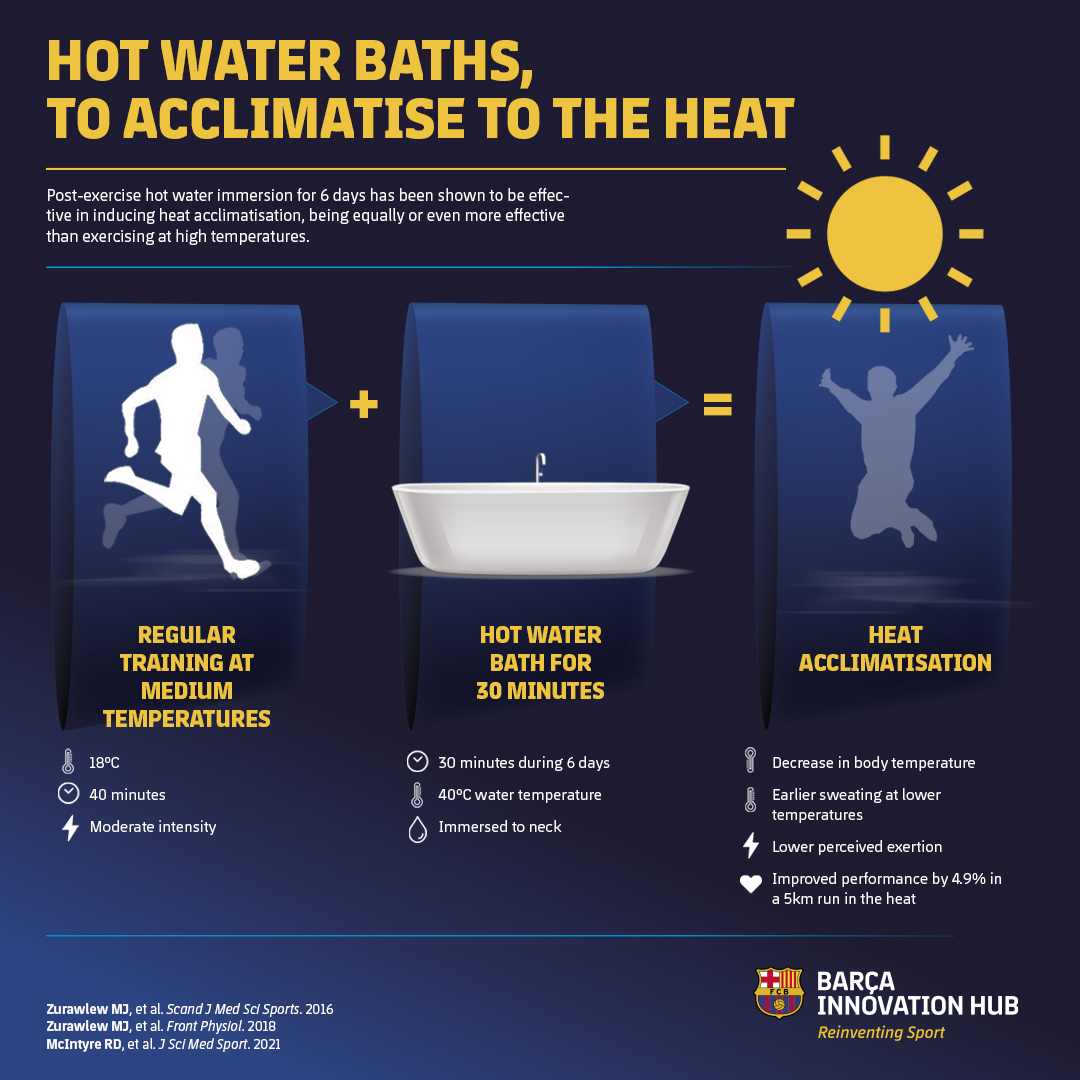