Nowadays, physical trainers and/or coaching staff are trying to monitor and manage the training load in order to comply with a set of precepts which aim to optimize an athlete’s physical fitness without comprising his health. While trying to follow specific rules, coaches are paying special attention to monitoring the accumulated load during a determined temporal structure, the load change between weeks, and the acute:chronic load ratio, among others. The question we should ask ourselves is, are the limits to these rules the same for all players? Do they all respond in the same way to the 1.6 acute:chronic load ratio? Are all of our players equally sensitive to injury?

The inadequate management of training loads is thought to be one of the main contributing factors that predisposes athletes to injury. However, “errors” in training management increase the likelihood of injury in some groups of athletes more than others. Moderators have been defined as characteristics that allow athletes to withstand/tolerate the training load and minimize its damaging effects (Windt et al., 2017). 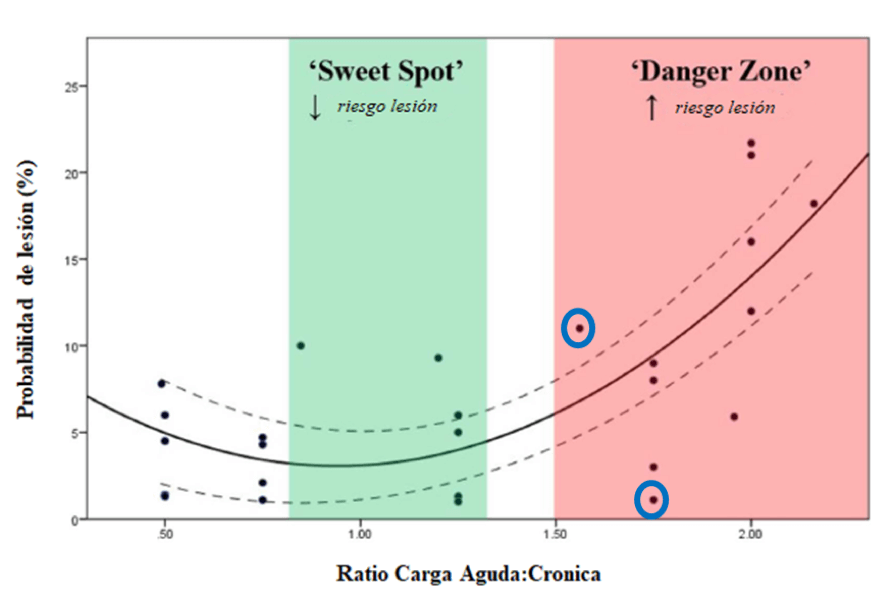 Cardiovascular endurance manifests as a moderator of the load result to which the athlete is exposed. In the case of soccer, recent investigations have found that the players with the lowest level of intermittent endurance were two to three times more likely to suffer an injury than the athletes with better performance on the 30-15 VIFT Test (Malone, Owen, Mendes, Hughes, Collins & Gabbett, 2017). Some of the results are shown below. The players with a lower intermittent endurance level (VIFT of 14.0-15.5 km·h-1) are more likely to suffer an injury when facing:

Sign up for the Certificate in Workload Management in Football, designed by David Casamichana

In this sense, taking the fitness level of our athletes into account when managing training load is an interesting idea. Thus, when this capacity is evaluated, and athletes with low fitness levels are detected, their allowable load threshold should be reduced while we attempt to resolve this limitation. This is usually contrary to what is typically done in the soccer world, where the load that the players with the worse fitness levels tolerate or experience tends to be the highest of the entire team, since we add extra work to resolve this limitation to group training. Applying these load levels to players with low fitness levels could increase the likelihood of injury.

In contrast, athletes who are “injury-resistant” – with a high fitness level and without previous injuries – would allow greater training loads to be applied if we pursue certain performance objectives, since the modulators present will prevent this load from increasing the athlete’s likelihood of injury. Acute:chronic load ratios of 1.7 could turn out to be “safer” for these athletes, while the likelihood of injury would increase for athletes with a long history of previous injuries and/or low fitness level as we would find ourselves outside the safety zone.