The pre-season or preparatory phase of the season is a time when major “errors” in training load management are often committed. Pre-season is the ideal moment for the coaching staff to instill their philosophy, style and/or model of play in the team. However, is this the philosopher’s stone of the pre-season?

Nowadays, many coaches still choose to ignore scientific knowledge and continue to focus on the importance of preparing their players physically, believing that the primary components of this period are to refuel players or see them suffer in order to later be able to handle the competition period. Classic training principles are also often compromised during this period of the season. We do not give our full attention to the principle of progression, passing rapidly from the lowest training load period of the season (vacation) to one of the periods with the highest training load, which is typically in weeks 3-4 of the pre-season. It is a time when we often also ignore the principle of individualization in favor of the proposed plans.

Group running or physical training circuits, where there is coffee with milk for everyone, are just a couple of the most frequent examples in this period of the season. The density of training sessions and matches (official and unofficial) makes it difficult to comply with the principle of optimal relationship between load and recovery, causing the athlete to accumulate a level of fatigue that could increase the risk of injury. Lastly, and perhaps the principle that is most forgotten in a classic pre-season, is the principle of specificity. Training plans that are far removed from the demands of the game are going to make it more difficult to transfer lessons learned and/or adaptation to football practice.

Sign up for the Certificate in Workload Management in Football, designed by David Casamichana

In terms of injury rates during the pre-season period, the majority of studies have found that there is a significantly higher injury rate during this period (Gabbett, 2004). Taking these statistics into account, it is clear that there is something that we are doing wrong. Temporal structures where the athlete must train with volumes and intensities that are much higher than the annual average (up to three times higher) put the player’s vigor at risk and can even increase the likelihood of sports injury. In addition, these high loads, characterized in many cases as having low specificity content, will actually have a negative impact on the athlete’s physical condition. We could even think of this as reversing the athlete’s adaptation. Therefore, pre-season can become an explosive mixture: a higher probability of injury combined with more time spent training (with little impact or minor physical improvements obtained). 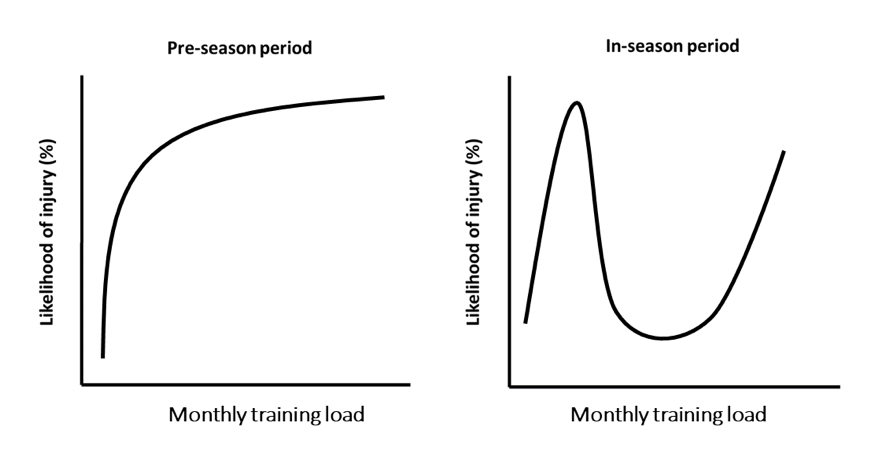 Practical applications of research conducted on the impact of pre-season seem to indicate that one of the objectives of the pre-season period should be that athletes complete the training sessions. Designing pre-seasons that allow an athlete to physiologically adapt, while minimizing injury risk and maximizing the availability of players for the sessions, should be one of the pre-season objectives (Windt et al., 2017). Thus it would seem that the traditional view of the pre-season as a time to refuel athletes is being gradually replaced by the concept of a period of gradual preparation where the athlete reacquaints himself with the activity, progressively and specifically.