PART I: THE STORY BEHIND THE COLLABORATION BETWEEN WIMU AND BARÇA

2015 was the year tech magazines began to show interest in how Data Analytics was going to transform sports. Specialists agreed that to achieve this it would be key to collect the data and project it on an analysis platform. This began to be done through the combined use of EPTS and a software which collected this data. One of the pioneering teams to adopt this system was FC Barcelona, thanks to the initiative from of its technical staff, and the partnership with Real Track Systems and its WIMU PRO device.

The EPTS now used by the club for all its professional sports began to be implemented in the second basketball team during the 2015/2016 season. The following season it was applied to all indoor sports and it was officially announced the co-development between the manufacturer and Barça Innovation Hub. This process culminated with the adoption of the device by the first football team in the 2017/18 season.

Initially, several models of EPTS devices from different manufacturers were tested. The goal was to identify, among all the high-performance devices available in the market, which one was the correct fit to FC Barcelona’s needs. But having multiple devices posed a problem, as each one had its own language and technology, a great effort was required to group the data and turn it into useful readings by importing the data into commonly used programs.

After testing them, the team observed that they all had strengths as well as weaknesses. None of them completely adapted to the sporting, scientific and technical goals of the club, as well as the needs of the five professional sports. To achieve this, one of the manufacturers had to be willing to develop its technology in collaboration with the technical staff and the Barça Innovation Hub.

The offer could be very attractive for the developers as the reference data needed to round up the accuracy of an EPTS is very difficult to obtain. This device has to be adapted to elite athletes, which aren’t that many from a global standpoint, thus making it difficult for the development of this type of technology. It also contains sensitive information that is not usually made public. Working with FC Barcelona, the company would have access to part of this data, and the club would end up with an EPTS perfectly adapted to its requirements. Finally, from the different start-ups, the club was working with, Real Track Systems from Almería was the one that best adapted to this challenge thanks to its technical expertise and the potential for improving and developing the project to new heights.

How Wimu is being used at FC Barcelona

This co-development has not only proved to be an example of a perfect symbiosis between a technology company and a sports club. It is also a great example, to showcase what can be achieved in this laboratory to push forward science and technology to benefit the club and its teams. Now, the club can train better, achieve better results for the tactical concepts, and help prevent injuries. The data from the same training field are organized in the same way as it is unified to a single device, and the quality of the data is better than that at the beginning of the implementation of the EPTS. This allows more optimal monitoring of the work done by each player and consequently helps the physical coaches to make better decisions. This helps prepare the human part of an athlete to obtain the result that a coach wants.

The first year of this partnership focused on the improvements of the WIMU PRO itself. Every week, the 25 Barcelona coaches undertook an internal workshop to discuss the device’s metrics, reliability, and ease of use. They would then generate KPI reports for RealTrack which analysed the best performance variables, and the company would incorporate these changes and improvements to the design, as well as adjusting the technology, always aiming to achieve an optimal result. A specific development was to prepare the ANT+ sensor that was incorporated to record data from the electromyography, performed with another device. This is how the accuracy of the EPTS was fine-tuned, making its measurements more useful to coaches and trainers. 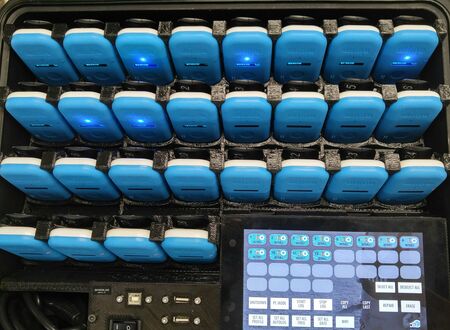 One of the features that proved decisive to extend the use of the WIMU PRO to the five professional sports areas, was its hybrid data transmission technology. As explained in the previous article of this series, the dual system which uses GPS and UWB radiofrequency minimizes errors due to data loss. In addition, it also allows the device to be used only with UWB for indoors when there’s no satellite coverage.

The next phase of this partnership focused on the software used to collect and interpret the device’s data which we will explain in the next article.