Multinaming: When a Giant Looks for a Stadium

SIGN UP FOR THE BASIC ELEMENTS OF SPORTS LAW

The third source of income for a club’s sponsorship (after the tee shirt and the sports ground), is the naming rights of the stadium. Over the last decade, it has become a global trend adopted by all teams, with the sole exception of European football. In Europe, only 30% of those who play in the first division, integrated in the big leagues, have sold their rights. Only the German Bundesliga has sold 98% of its naming rights. The other leagues are more reluctant, due to the emotional relationship of the club’s fans with their stadium, and how linked their name may be to the team’s brand equity. 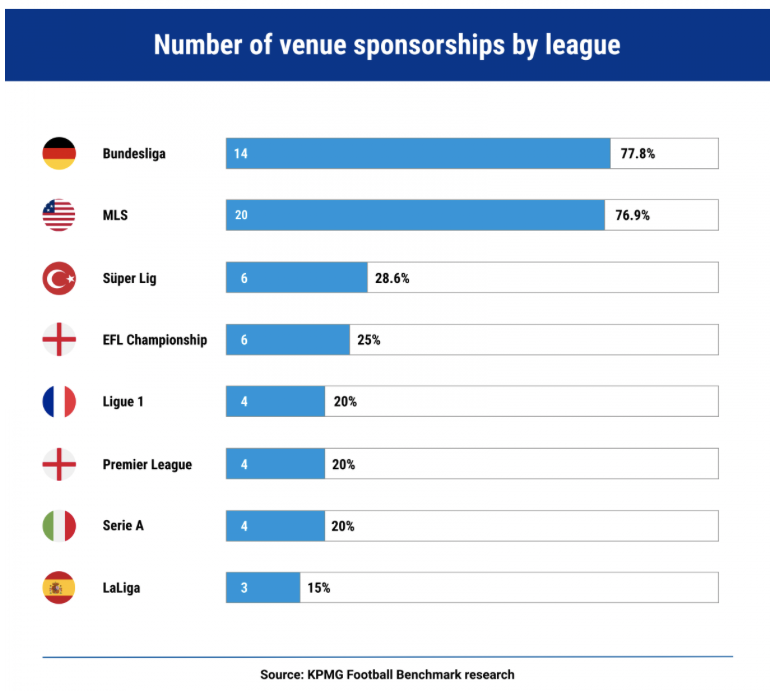 The fan’s emotional relationship with the name of their stadium is as strong as the one they maintain with its colours, with the stadium, and even with the neighbourhood that surrounds it. Especially if they identify it as the place where their parents took them as children and started to be fans. That is why it is so difficult to change names, and the boards often take advantage of stadium renovations to negotiate naming contracts. Opening a new headquarter makes it more feasible for it to occur, as shown by Atlético de Madrid in Spain. Its historic Vicente Calderón stadium was moved to the other end of the city, and the new stadium was named after the Chinese real estate company Wanda, that sponsors the tee shirt as well as being a shareholder of the club with 20% of its shares. Today, the Wanda Metropolitano is the second European stadium with the highest revenue for naming rights. 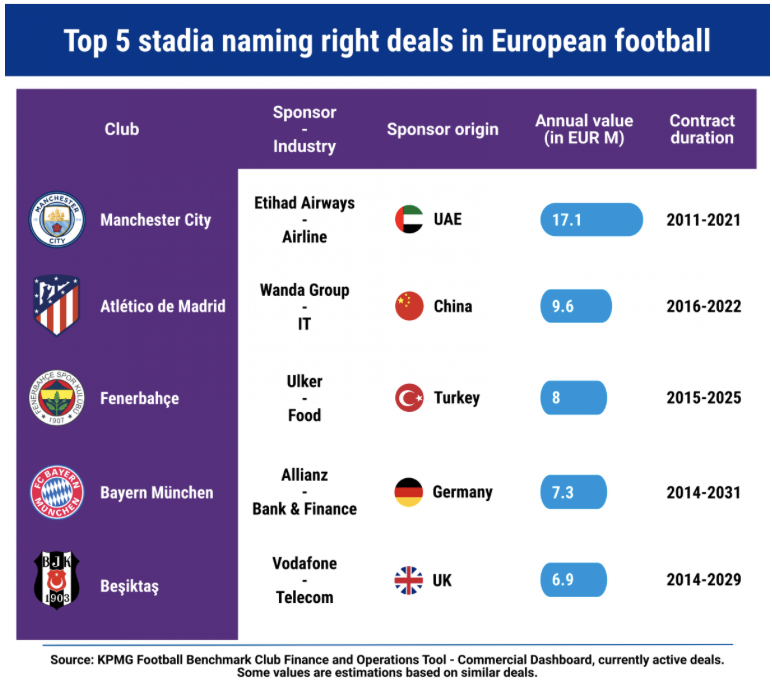 But this type of sponsorship is not always a good business. It depends on the brand equity that the name of the stadium has within the club. When it is well known and has a big number of followers, the sum of the advertising inside the stadium and the revenue from merchandising sold to fans, can exceed those of the naming rights. One may wonder if this could be the case of two important stadium renovations currently taking place at F.C. Barcelona’s Camp Nou and Real Madrid’s Santiago Bernabéu. Both clubs have announced that they will negotiate naming rights for their venues, although the names have not been revealed yet. For these two cases, the name of the team is way more important than that of their stadium, if we look at the brand as a whole.

This is also the case for the most important contract in the sports world in regard to naming rights with Allianz’s multinaming of stadiums. The “Allianz family of stadiums”, as the company calls them, includes 7 large venues, with football teams whose names are well known nationally and internationally. Bayern Munich, OGC Nice, Juventus, Rapid Vienna, Palmeiras São Paulo, Sydney F.C., and Minnesota United. Located in Europe, the United States and South America, they add up to an annual disbursement by the company of 30 million euros. The way it is distributed internationally, and its investment show why a naming contract can be successful when viewed from both the club and the advertiser’s point of view.

For Allianz, choosing the stadiums have been done based on the teams they host, the supporters they have in their country, those they attract internationally, and the number of national and international matches the team plays. For a German-based insurance company, Bayern Munich was almost a mandatory sponsorship, while Rapid Vienna or Juventus allowed it to reach fans and clients residing in the two countries where it first expanded its business within the European Union: Austria and Italy. As it established its operations in America, it needed to name a stadium for the north, choosing the US, and one for the centre and south, choosing a Brazilian team which is well known in the continent. It may seem strange that it has not included in its portfolio any stadium from Asia or the Middle East, where it is also operating. But actually, it does reach to the Asian audience: through the very numerous fans of the European teams, in addition to those of the Brazilian Palmeiras, and the Australian Sydney F.C. They are numerous enough to make the brand visible in these regions. Its investment is profitable, because the ultimate goal of a naming right contract is not only to showcase the brand in the stadium, but to have access to its followers trying to turn its fans into customers.

A sponsored club seeks not only a new revenue stream, but a long-term relationship with its sponsor to partner in businesses that benefit each other. In this respect, Allianz is also a good case study. In addition to insurance, an important part of its business activity is dedicated to customer engagement through a digital experience. As a result of this vision and its agreement with Bayern, it has introduced an NFC system in the stadium, which allows visitors to enter by bringing their phone or smartwatch to the readers at the gates. No physical tickets or waiting lines. Like that it  positions itself with a meaningful digital experience with the fans who come to the stadium. Another example of this mutually beneficial relationship is the renewed contract with Juventus, which grants it the naming rights until 2030 in exchange for the commitment to sponsor training and warm-up outfits, as well as supporting the women’s teams.

With a few stadiums undergoing renovations, and the revenue crisis brought on by the pandemic, it seems possible that naming right contracts will become prevalent in the European football leagues. If the vaccines that are already announced bring a panorama of normality in 2021 or 2022, the reluctance of both parties, now focused on the negotiation to lower prices, will end. There are no doubts stadiums will fill up again, and if they are more spectacular (using tech and having a bigger capacity), more people will join the game from the stands.