SIGN UP FOR THE CERTIFICATE IN STRENGTH TRAINING: FROM REHABILITATION TO PERFORMANCE

The implementation of global positioning systems (GPS) technology in team sports has allowed in-depth quantification of external running load and the internal response during training and in some cases, competition. Quantifying and monitoring of the external running load are key to guide the rehabilitation process after an injury, allowing practitioners to analyse the evolution of certain parameters, adapting where necessary the athlete’s plan on their pathway to return to play. Monitoring of running load and an efficacious rehabilitation programme will allow customising the rehabilitation process, helping to optimise the decisions that must be taken during an athlete’s recovery. As a team’s success is greatly determined by player availability, injuries may exert a great influence upon the team’s results throughout a season, subsequently affecting the team’s final league position and the club’s financial income.

The return to the pitch after injury is one of the most important aspects within an elite footballer’s rehabilitation process. The main objective of this period must be preparing the player for their return to team training/competition with the goal of minimising re-injury risk . In this context, a premature return to training with the group or to competition will increase the risk of reinjury (1, 2). However, on the other hand, having key players available is beneficial for the team. For this reason, the risk/benefit balance may represent a conflict of interests which requires the medical team and the performance team to take a decision together in a player centred approach. It is essential that we understand the return to play as a continuous decision-making process, where each decision made, will condition the following.

An adequate rehabilitation programme is essential when trying to shorten as much as possible a player’s downtime because it will also affect the team’s preparation from a tactical perspective. However, the rehabilitation programs described in the scientific literature are limited and absent of practical based experience working in elite football. For this reason, Matt Taberner, researcher at Liverpool John Moores University (Liverpool, United Kingdom) with more than 12 years of experience in the English Premier League, in which he has worked at Aston Villa Football Club (6 years) as Lead Academy Sports Scientist across Youth and Reserve teams, and at Everton Football Club (6 years) as Head of Sports Science, and more recently as Head of Rehabilitation of the club. He proposes the “control-chaos continuum” as an adaptable framework for on-pitch rehabilitation after injury, considering both the quantitative and qualitative aspects of load and gradually imposing greater perceptual and neurocognitive challenges throughout an athlete’s recovery (3). 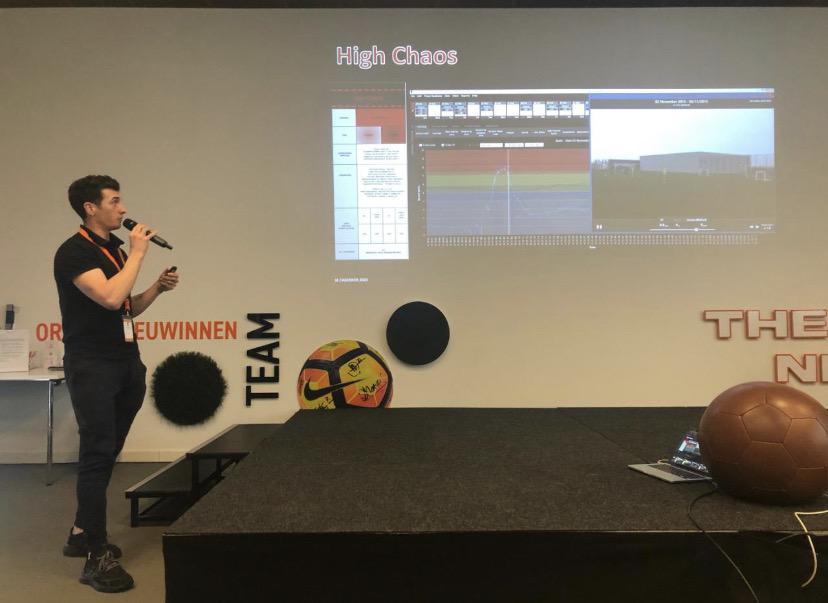 Taberner uses the concept of ‘chaos’ referring to the specific sports context, trying to simulate the variability of movements and possibilities that arise throughout a game, which reflect the unpredictable nature of football. This model is developed along 5 phases, using a constraints-led approach which moves from high control to high chaos (Figure 1). One of the main objectives of the framework (where applicable) is to return the player to the required level of chronic running load, to give the player the capacity to handle the training load demands upon return to play.

We interviewed Taberner, who told us how he devised the model: “the ‘control-chaos continuum’ evolved from my experiences of working within the English Premier league, my academic training in Sports Science, together with observations and reflection of the physiotherapists’ methodology in this field. This allowed me to analyse, process and identify key areas that were absent, but which I felt were necessary within injury rehabilitation in high-performance sports. One of the main observations I drew was that rehabilitation programmes have little in common with the volume, intensity and structure of team training. Neither did they take into account the need of progressive conditioning that would physically prepare the player for the demands of elite football, in which unpredictable actions and movements are innate to non-linear demands of sport in competition. These observations and the gap in the contemporary sports science literature led me to develop and conceptualise my own methodology for the on-pitch rehabilitation of elite football players, supported by the belief that it was necessary to have a framework to guide professionals”.

In the first phase, the player returns to the pitch under controlled conditions, minimising risk, moving at low speed and reducing the game-specific tasks to develop the athletes’ confidence. During the “Moderate control” phase, changes of direction with the ball are introduced, but under controlled circumstances (in a situation of controlled chaos). Next, for the transition phase between control and chaos, a limited volume of moves is included with game-specific unpredicted and random actions and transition to football-specific weekly training structure. In the 4th phase, high-speed actions are increased under moderate chaos (unpredictable movements), adding more progressive passes and game-specific movement patterns. Finally, session content includes drills designed to be executed in “chaotic” scenarios (high velocities/high chaos), and the progressive inclusion of technical elements typical within football, for example, passing and shooting in specific situations related to the individual player’s demands in competition. In the last phase, training loads should meet the required levels agreed by shared decision-making team with drill content simulating the intensity of the competition in preparation for a return to play.

So far, two cases have been published about the implementation of the ‘control-chaos continuum’ model during rehabilitation and return to play of two elite football players. In the first case, after having suffered a rupture of the proximal hamstring, the ‘control-chaos continuum’ was used to progressively return the player to pre-injury high-speed running loads under increasingly chaotic conditions incorporating positional-specific conditioning and technical actions. The player returned to competition 120 days and, after 13 months, the player did not suffer any relapse of injury (4). Surprisingly, the player exceeded his maximum speed peak during return to play. In the other case, after an open fracture of the tibia and distal fibula, the player returned to training with the team 7.5 months after the injury and completed for the first time 90 minutes of a game 9 months later, staying injury-free 11 months after his return (5). As for the practical applications of the model, Taberner himself comments on the following: “High-quality individualised rehabilitation is a critical aspect of the return to play process: a ‘one-size’ fits all approach does not address the broad variability that exists among injuries, players, competitive demands, and load response. The ‘control-chaos continuum’ provides a framework that can be adapted to the type of injury, player and healing process with the objective of ensuring a successful return to play and minimising the potential re-injury risk.”

The return to player after an injury shows a high risk of relapse and requires complex models that simulate the natural conditions of the game and minimise the risk of a new injury. The combination of evidence and clinical experience that supports the ‘control-chaos continuum’ model provides sports professionals with a framework to help facilitate a successful return to play after injury.