Is Milk an Effective Option for Recovery?

Recovery is one of the main processes to improve sports performance. Within the many factors that condition a good recovery, nutrition is one of the main ones.  As explained in previous articles, it has been proposed that recovery after training depends on what is known as the four Rs, (rehydration, refuel, repair and rest, additionally including the regeneration of the immune system).

For instance, it has been proposed that drinking milk can be a good strategy to hydrate after training. A study analysed 15 individuals who had worked out and lost 2% of their body weight during the session, after which (during the following hour) they had different beverages, including cow milk, soy milk, a dairy supplement, or a classic sports beverage with carbohydrate. The results showed that the sports beverage obtained the worst results with regard to body weight recovery and retention on ingested fluid, although no differences in plasma volume changed or electrolyte concentration were observed. Furthermore, it is important to mention that after ingesting milk beverages, the participants tended to say they felt fuller than with the sports beverage. The study determined that milk beverages are the most effective to benefit rehydration.2 Other studies have made similar comparisons between milk and classic sports beverages with carbohydrates, and found out that milk is at least as effective to rehydrate as sports beverages (resulting in less urinary excretion of fluid) – although the latter can be more tolerable at a gastrointestinal level –.3,4 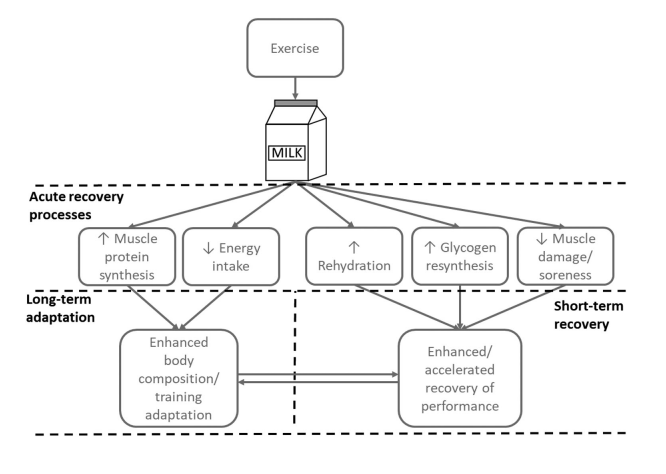 Different studies have analysed the effects of milk on the recovery for muscle damage. For example, in one study, a group of individuals ingested half a litre of milk, a litre of milk or a placebo substance after performing a designed exercise to generate muscle damage. The results showed that milk reduced strength losses and increased in creatine kinase (marker of muscle damage) compared to the placebo substance, and differences between having half a litre or a litre of milk were not observed.7 Besides, another study compared the effects of having milk or carbohydrates to reduce muscle damage, and it was observed that milk was more effective to decrease the loss of strength and sprint performance, as well as to reduce the feeling of muscle pain (although these results depended in part on the participants’ gender).8 These results, together with the above-mentioned results showing an increase in the activation of anabolic pathways (for instance, mTOR) after milk consumption,6 would support the potential of milk to benefit muscle regeneration.

Although protein supplements or commercial beverages of carbohydrates can be effective to ease recovery after training, milk has also shown to be at least as effective as these, being also widely available, cheap, and practical. To summarise, its combination with carbohydrates (for instance, 500 ml of milk with chocolate ingested after training) seems to be a recommended option to ease energy and muscle recovery (especially if the athlete does not show gastrointestinal symptoms when consuming it).