There must be a balance between incorporating technology and the fan’s passion; we should never forget that fans are enthusiasts of the sport and its tradition. This has been the prominent idea among the panellists in the second day of the Barça Sports Technology Symposium, which included themes revolving around the management of groups, relationship with the fans and users, and social responsibility of sports clubs.

In the first panel, Mobile Obsessed, David Bailey showed some audience measurements for the Formula 1 Grand Prix. Tracking this information shows three peaks, on Wednesday, when the Grand Prix starts with the arrangements, on Saturday, during the qualifying sessions and, finally, on a Sunday with the race. One of the most relevant results of this analysis shows how the gaming platform follows the same evolution with the same peaks. Regarding devices, Bailey highlighted the variety of media to follow the Formula 1 and remarked that those who use a computer or a laptop, stay longer online than those who use a tablet or a smartphone.

Nichola Spencer, from the Rugby Football League, said that in England there are more than 14 million people interested in this sport. The RFL has created an app, Our League, to respond to the fans interest and needs as well as to enhance their loyalty to this sport. To create this app, they have relied on the user’s data to personalize its content. However, its most important feature is the different forums for fans to express their opinion, which is in fact what they were asking for. The RFL has also reached to an agreement with Twitch (a videogames streaming platform) to stream rugby matches. This is part of a strategy to bring rugby to a younger audience.

UEFA can only sell tickets of the final game of the different competitions it manages, they do not stream matches and the sports information is managed by the media. Penelope Tomasi, UEFA’s CRM Manager, explained how with a limited business margin, they’ve found a space to do so through the use of technologies. The brand value in this space is the official data. Fans look up at their digital services because they rely on the truthfulness of the information; however, UEFA has to compete against Google, that follows their competitions and places them in first place on their browsers, and Wikipedia, that gathers statistical data. Despite this, the UEFA TV app has reached 200 million views with archive footage of their tournaments. Furthermore, when it sells tickets, the organization is also orientated to provide a more profound experience. With UEFA’s app, fans have their entire journey organized by stages and a guide to visit the city where the match will take place.

When asked about the privacy legislation of personal data and their personalization plan to each user of the app, Bailey admitted that they had to change the strategy a few times and Tomasi was grateful that there’s more security for users in this field. Spencer, however, complained about the condition acceptance menus as it ends up blocking new registers, and as a result, new users to the platform.

During The game: What’s next? Steve Palmer, Head of data solutions at the Premier League, explained how technology has helped to improve refereeing. It has also helped to avoid ghost goals, and improve game retransmissions with statistics and visual effects, such as the probability to make a goal from a free-kick or the efficiency percentage of passes from any given player. He also showed how virtual reality (VR) can recreate a match in real-time so that the audience can analyze the game from many different angles sitting at home. To attract a younger audience and open up to new markets, these VR matches can be customized in a way that players show another aspect. As an example, he used a match where players were portrayed as Lego toys. In spite of this, Palmer warned that technology can never surpass the passion for sports, which at the end of the day is the main reason which unites fans. It should never be forgotten that there has to be a balance between innovation and passion.

Daniel Pelchen, Performance Data Analyst of Collinwood FC, exposed the particularities of Australian football. A sport that has elements of football, rugby and basketball. Nowadays, Australian football has perfectly integrated data analysis as a part of the game. Analysts are sitting together next to the coach in a stand and they work together to direct the teams.

In Italy, the “Calcio” has always stood out for its tactical football. Lorenzo Dallari, of the A Series, explained that is the biggest attraction of the “Lega” in the world and that they are working to promote it. For this reason, they have developed a new tool called the Virtual Coach, which was presented for the first time in Barcelona. It is an app available to all teams in the competition. Through the use of Artificial Intelligence, developed by the Polytechnic of Milan and Math & Sport, it will allow teams to make a more advanced analysis of the match in real-time. 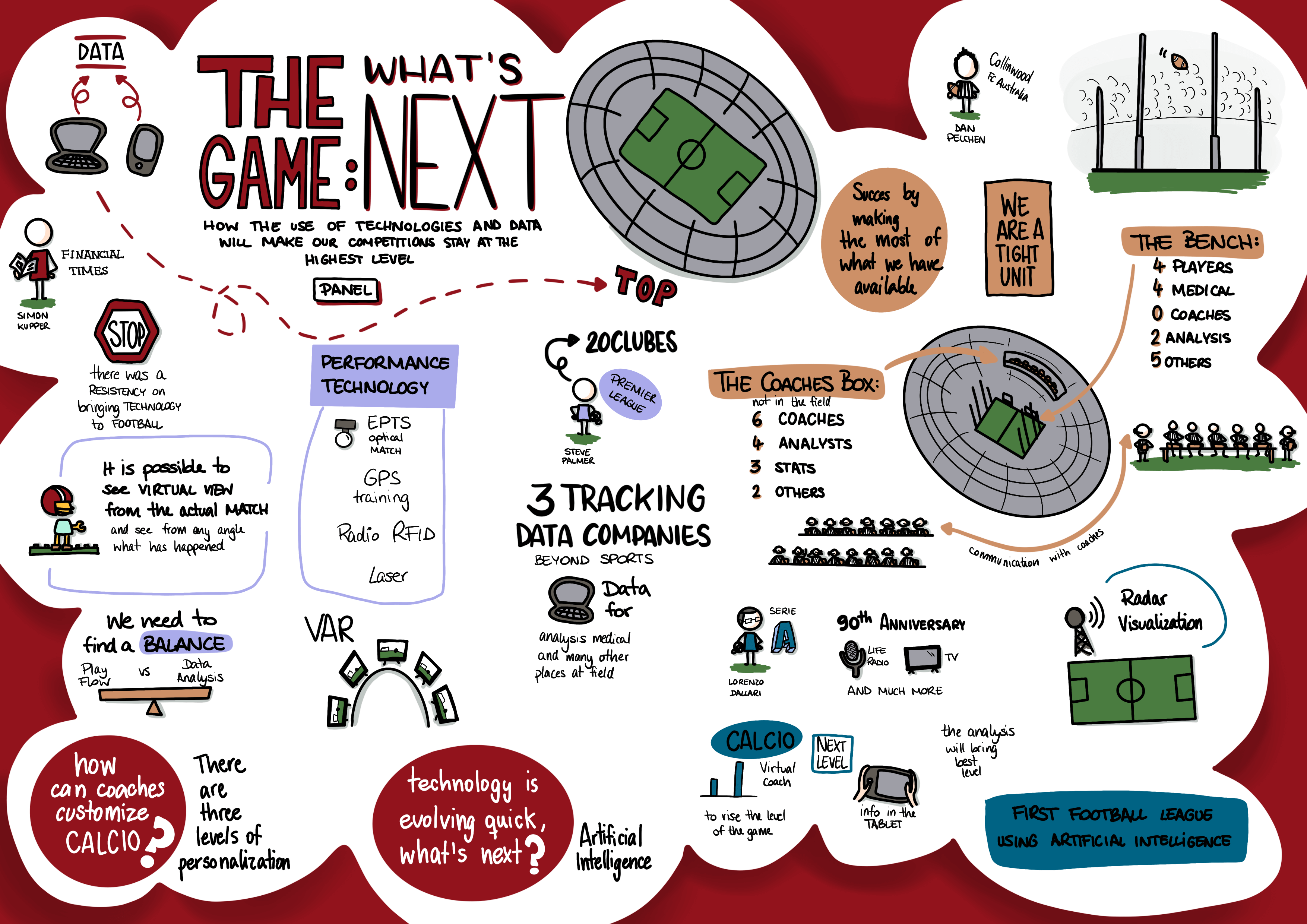 Real Club Deportivo de La Coruña is one of the most successful clubs in Spain; however, during the past decade, they’ve gone through a debt crisis that diminished their sports performance. The region has also suffered an environmental crisis due to toxic waste and oil spills in the coasts. To engage with the community who support the club, José Gonzáles-Dans showcased a project that alludes to the fighting spirit and idiosyncrasies of the locals (just as some the British team’s do), with a strong fishing culture, and also referencing their main concern, protecting the environment. Having this in mind the Ecoalf project was created, which raises awareness for recycling, through different activities to clean up beaches from plastic waste as well as creating a “green” fashion brand.

The project T’Acompanyem of the FC Barcelona foundation in the Vall d’Hebron hospital, is a new space (which is the biggest one in Cataluña and one of the most important ones in Spain), for children who have to stay for a long time at the hospital or for those who attend frequently, for them to watch their favourite team’s matches. Dr. Antonio Ramos Quiroga, head of the psychiatry department of the hospital, announced that they are further extending this project by creating another space with lockers, which resembles the changing room of a professional team. There’s also VR devices to reconnect children with sports, as it’s something that they can’t do due to their illness.

Finally, Mariona Miret, from the FC Barcelona Foundation, said that the institution’s objective is grounded on three pillars: prevention of violence in society, social inclusion, and education. In this context, she explained a project which has been developed to fight bullying in schools, through a VR experience program. The most efficient way to fight against bullying in schools is by promoting empathy, she said. With these devices, it is possible to simulate different harassment situations, and kids are able to experience a bullying situation and understand how the victim feels. 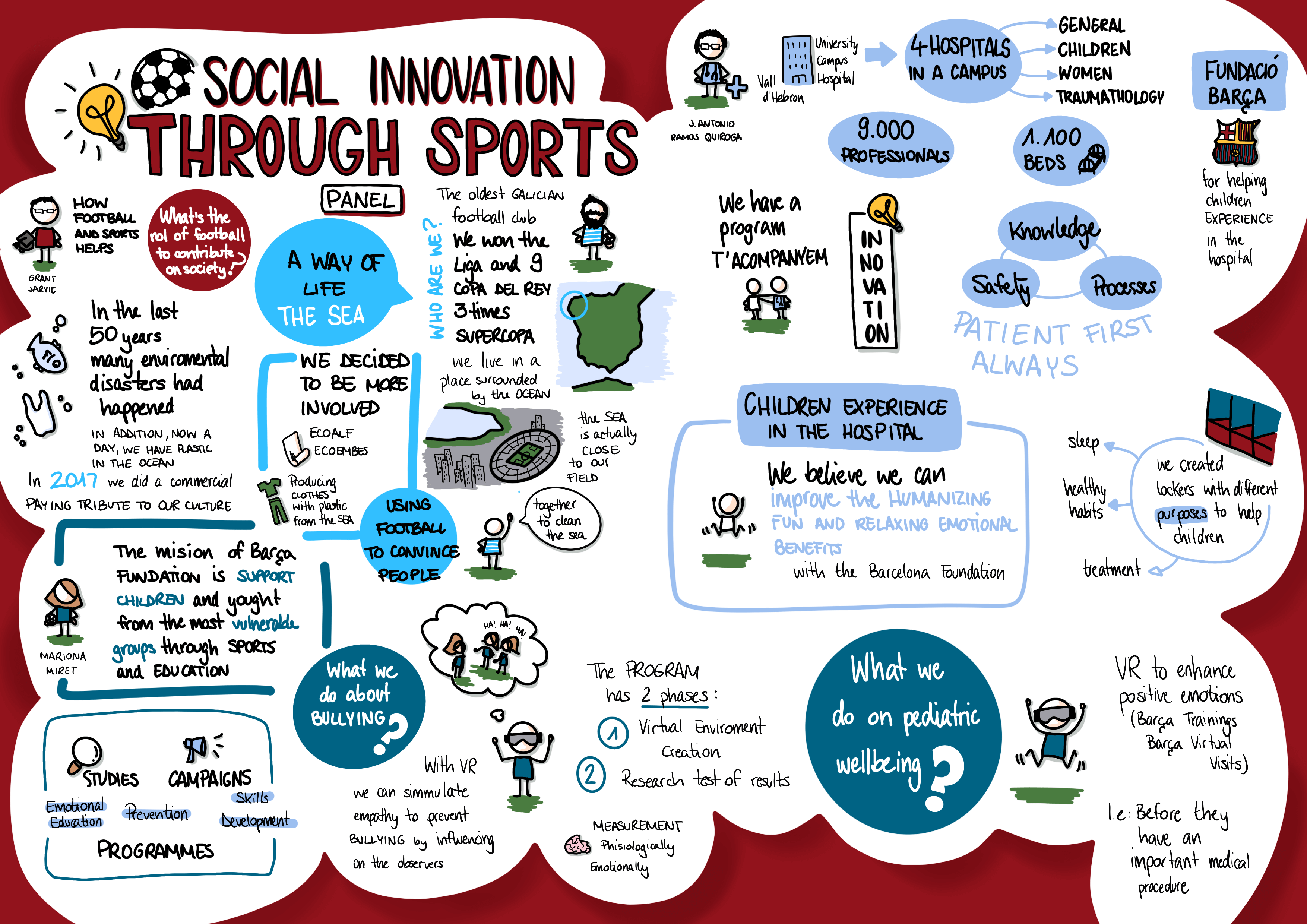