Injury incidence of LaLiga football players after the lockdown 

Sign up for Advanced Program in Injury Management for Team Sports

The irruption of COVID-19  in football resulted in the suspension of the Spanish league (LaLiga Santander) and a lockdown for many weeks. Consequently, football players’ daily routines were completely affected. Initially, as a preventive measure, the national championship was called off for 15 days. However, the competition was finally suspended for a 12-week period. During that time, football players remained confined in their houses for 8 weeks, and then, they had 4 additional weeks to take up their activities in their clubs before the resumption of the championship, which still had 11 sessions left. Due to the urgent need of finishing the season, the new schedule established that games would be held between 3-day intervals. As a result, the recovery period between games would be reduced.

With the aim of keeping trainings during the lockdown, LaLiga coaching staff provided football players with training programs adapted to the conditions of their homes. Inevitably, these personalised programs had some limitations, especially when performing specific activities such as accelerations and decelerations, changes of direction or sprints. This context made sports scientists aware that the constraints inherent in training sessions performed at home and the tight schedule could lead to an injury increase in football players when returning to play after the lockdown, especially in muscle injuries.

On this basis, the physical therapist Victor Moreno Pérez, specialist in training optimisation and physical sports readaptation, led a study (1. read reference) below published in the International Journal of Environmental Research and Public Health which evaluated the impact of injuries on LaLiga football players before and after the lockdown. Until then, only two studies based on the German League compared the average reported injuries in this context. Even though both studies analysed the same event, the results obtained had some inconsistencies. Seshadri(2), whose investigation was based on data collected from Transfermarkt, informed a significant increase in the number of injuries after the lockdown. On the other hand, Krutsch (3), based on information from German Kicker, didn’t identify any notable differences between both periods.

Similar Values in the Resumption of the Championship

In order to be able to contrast the values extracted from the Bundesliga with those from LaLiga, a study was carried out in which a total of 277 male professional players belonging to 11 different teams from the championship participated. 86 of them were centre backs, 95 midfielders, 58 forwards, and 28 goalkeepers. Injuries during season 2019/2020 were classified and registered by each team’s medical staff following the International Olympic Committee standards. 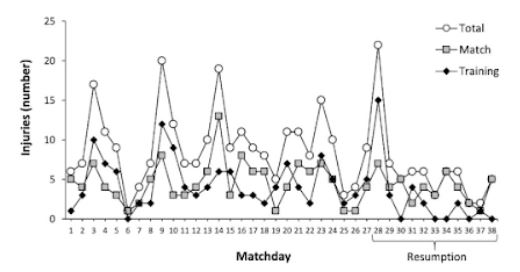 Moreover, it was demonstrated that most of the injuries registered during the study were muscle ones. However, this doesn’t make sports scientists’ hypothesis true since there wasn’t any increase in the number of this type of injuries compared to the period before the lockdown.

Data collected from the study demonstrated that there weren’t any notable differences between the number of injuries before and after the lockdown. These results suggest that the specific training programs carried out during the lockdown together with the measures adopted by LaLiga after the resumption probably contributed to the prevention of the significant increase experts were concerned about.

The case of Bundesliga, which was the league with the highest number of injuries according to Krutsch3’s study, was particularly illustrative. The German championship was resumed on 16 May 2020. It was the first competition to return to play and it established recovery periods of 4.6 days. Even though periods with an average of 3.5 recovery days between games were established in LaLiga, there were 4 extra weeks of preparation before the resumption of the championship after the lockdown. This was useful to demonstrate that, contrary to sports scientists’ hypothesis, tightening the schedule was not directly related to the number of injuries.

The 4 extra training weeks together with the hydration breaks, and the possibility of performing up to 5 substitutions per game also contributed to the stabilisation of injury incidence after the lockdown.