HOW STADIUMS ARE HELPING IN THE FIGHT AGAINST CLIMATE CHANGE

A sports stadium is not an isolated building of the urban fabric surrounding it or of the society in which it is involved. The capacity it has to mobilise fans, the influence it has on the city, and the impact on the life and culture of its surrounding are important aspects of the way clubs are managed nowadays. This is a reality as we see how world-renowned clubs have decided to convert their infrastructure into pioneers of innovation in the field of renewable energies and reduction of the carbon footprint.

Renovating the facilities or building new ones pursues not only the efficiency of the building itself but also the full involvement of the fans to take care of the environment and in using clean energy sources. A good example is the Golden 1 Center, home of the NBA’s Sacramento Kings, which receives 100% of its electricity from the sun and has reused and recycled 99% of the waste generated during its construction. As well as reminding us of these figures at each game, every year the stadium is opened one night to organise environmental events to educate citizens on the importance of sustainability.

The Johan Cruyff Arena in Amsterdam, the home of Ajax, reuses used electric car batteries, charges them up through its system of solar panels and wind turbines, and redistributes the leftover energy to the local neighbourhood. The lawn of the New Law Stadium in the UK is watered with 100% recycled water and the robot that cuts it is powered exclusively by solar energy. If there is an extreme case in the use of green energy the Signal Iduna Park in Dortmund in Germany is a great example. It is disconnected from the electricity network and it has managed to obtain all of its power from solar panels thanks to a new engineering system based on semi-conductors. 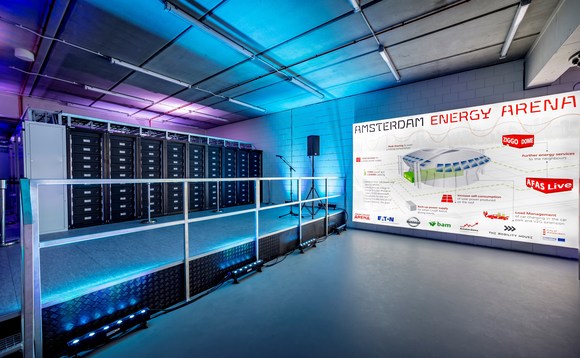 Another important environmental feature is making use of rainwater. At the Mercedes-Benz Stadium in Atlanta, an enormous concrete tank has been built with a capacity for more than 2.5 million litres of water. Perfectly integrated into the iconic architecture of the stadium, it goes unnoticed by the majority of visitors, unlike its effects, as it collects rainwater and snow from the roof, reusing it to water the parks and gardens that surround it. In addition to having provided free water to green spaces, it has also reduced flooding in the West-End neighbourhood, an area that was plagued by the combined effects of storms and the features of its terrain.

These types of facilities are not cheap and are a far cry from providing a quick return on investment. On the other hand, the image of clubs that implement these strategies is certainly perceived more positively by the public, whether or not they are fans of the club. All spectators will agree that taking these measures better represents the positive values of sports and the commitment to our society. Nevertheless, there is also a direct repercussion to the clubs balance, as the maintenance costs of these stadiums, once modernised, are drastically reduced in comparison to traditional costs.

FIFA has also emphatically joined this trend. It has asked the organisers of the 2022 Football World Cup held in Qatar, that its twelve host stadiums should have zero emissions. In a country with high desert temperatures such as Qatar, it will be possible to maintain a comfortable 23ºC, even in open stadiums, thanks to the efficient use of solar energy transformed into electricity to be used for the air conditioning systems. A clean game in every sense.

Obviously, the carbon footprint of a complete league season is much smaller than that of a factory or the annual combustion from the vehicles and traffic in a city. However, the positive influence of stadiums on climate change must also be measured by its capacity to influence social actors. Stadiums that have installed recharging points for electric cars and facilitated public transport up to their gates have helped city councils to discourage the use of private vehicles. It’s another example of how a well-managed stadium, as well as being a milestone for its city or region, may become a clean and efficient motor for social change.