How much do professional football players sweat and how do they stay hydrated?

Over the course of a match, football players perform high-intensity sporadic actions leading to a depletion of the glycogen content (the way in which carbohydrates are stored in the liver and the muscle) and an increase in physiological demand that can accelerate the onset of fatigue.1,2 Therefore, as it is suggested in a review carried out by Asker Jeukendrup, carbohydrate supplementation before and during games (~ 30-60 g/h in solutions containing 6-7% of carbohydrates) maximises glycogen resynthesis and boost performance in team sports.3 In addition to the reduction of the energy substrate, high intensity exercise brings an increase in body temperature, which triggers a series of mechanisms of thermoregulation aimed to dissipate the body heat and maintain the physiological homeostasis, that is, a redistribution of blood flow to the skin and an increase in perspiration. Thus, it is common for athletes to lose body fluids during matches , especially when the intensity exerted and temperatures are high.

Even though the evidence is not conclusive, several studies suggest that players’ dehydration during a game can affect both their physical and technical performance.4,5 It is estimated that a 2% dehydration threshold can affect sports performance, taking into account the fact that players are in an “euhydration” status (normal body water) before playing.6 Therefore, one of the main objectives of physical trainers and nutritionists is to try to maintain a hydration status that does not overcome the 2% limit during a game and also to assure a regular carbohydrate intake.

One of the problems in elite sports is that most of the reference values refer to studies on amateur or semi-professional athletes. Coaches barely have data to respond to questions such as: How does exercise intensity and temperature affect the professional players’ hydration status? What are water and carbohydrate intake patterns like under different environmental and performance conditions?

In this sense, research conducted by renowned investigators such as Ian Rollo, Rebecca K. Randell, Asker Jeukendrup and members of the Medical Department of FC Barcelona such as Javier Yanguas, Daniel Medina, María Antonia Lizarraga and Jordi Mesalles, investigated water balance and carbohydrate intake of the football players in the first team at FC Barcelona when they were training at different intensities and temperatures.7 To this end, in the training sessions held in 4 different situations, sweat rate and sodium loss as well as ad libitum water and carbohydrate intake of 14 first team players were measured:

The results showed that intensity and environmental conditions significantly influenced the sweat rate in a way that the training session performed at high intensity and in hot conditions induced a higher perspiration rate on players (HH: 1.43 ± 0.23 L/h; HL: 0.81 ± 0.17 L/h; CH: 0.98 ± 0.21 L/h CL: 0.55 ± 0.20). It is important to mention that in none of the conditions studied, the players exceeded the 2% dehydration threshold, although HH and CH groups showed a higher percentage of dehydration, indicating no differences between them. According to the authors of the study, “besides the exercise intensity, this might be a consequence of players wearing more clothes in response to cold.” Hence, dehydration may be because sweat rate increases with the use of clothes and that water intake is cut down when playing in cool environments.

The research demonstrated that, even though perspiration increases in certain situations, players did not overcome the 2% dehydration threshold limit as water intake was related to perspiration: the more the players sweat, the more water they drank (Figure 1). A remarkable aspect is that most of the players in the 4 situations, presented a dehydration status in their urine. Consequently, according to the researchers, “water balance data is likely to underestimate the degree of subsequent dehydration that is caused during a training session.” Even though there is evidence suggesting that training under dehydrated conditions can mitigate the consequences associated with dehydration, performance is improved when players start playing or training in an euhydration status.8 Therefore, educating players on how to get hydrated in different situations can play a fundamental role in reducing the risk of dehydration and thus boosting performance. 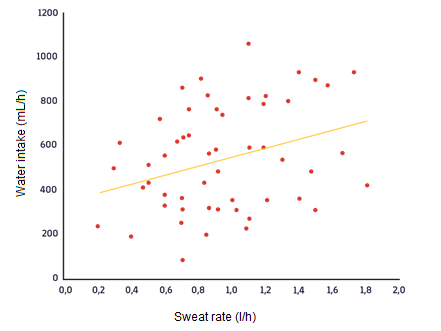 Concerning carbohydrate intake, a variability was shown between players (ranging from 0 to 38 g/h), indicating no radical differences between the 4 situations analysed. Most players implemented the minimal carbohydrate intake recommendations formulated by the American College of Sports Medicine (ACSM) (30 to 60 g of carbohydrates per hour for games lasting from 1 to 2 hours and a half).9

This data shows the variability of hydration status, water and carbohydrate intake depending on training intensity and environmental temperature in elite football. Therefore, recommendations concerning carbohydrate and water intake should be made according to players and the match condition.