What better guarantees the success of a stadium, an outstanding architecture or a good adaptation to the business plan? This is the never-ending debate among club managers, architects, and stadium project managers. Spectacular facades tend to be photographed, and recorded, and have a great online presence. This can improve the team’s image of success and modernity. However, this does not guarantee success. Especially, if the rest of the architecture design is ignored.

The architecture of the stadium must perfectly fit the revenue generation line and get adapted to the pure or mixed exploitation pattern chosen by the club:

In an ideal world, the architect would receive a briefing with the business plan and model of the stadium to be constructed from scratch or to be renewed. He would adapt to it in order to create an adequate project to have a return on investments and also last in time. But this does not always happen.

One common obstacle when reaching that is the lack of a key role such as the one of the stadium project manager.  This specialization is fully integrated into the American architectural studios and they give advice the main architect. This is the main reason why in that country the white elephant phenomenon, a stadium that never gets a return on investment because it tends to be underused or it is not suitable for the place once the competition it was built for is over, barely exists.  However, this professional role is less popular in other countries, where they act as an external advisor. This leads to taking fewer powerful decisions and makes it easier for many managers to be dazzled by the aesthetic of the architectural proposal and forget to pay attention to the rest of the characteristics to guarantee the return on investment.

The Olympic Stadium in Tokyo 2020 is a clear example of this. The architect Zaha Hadid won the international competition with an outstanding proposal that tripled the expected initial costs. When the organizing committee decided to start it from scratch, they took a brave decision that ensures a useful legacy for the next fifty or a hundred years. Less attractive but with the chance of being more useful and profitable in the future for the city of Tokyo. It is very important to mention that it has fewer seats. From the initially 80,000 expected seats to just 65,000.

The Importance of the number and type of seats

The lack of a thorough study of the number of seats that should be included in a stadium is a common mistake. Even though it is clearly demonstrated in Olympic legacies, it can also occur in sports clubs.  This is what happened to Juventus’ new stadium in the 90s. It was built with 70,000 seats and it was never full. This was permanently interpreted as if the team were not attractive enough to make their supporters attend the games. So, the club decided to demolish it all and built a new one with 41,000 seats. Thanks to that, the club can currently complete 90% of the seats creating a fantastic internal atmosphere and a winning image of the club and team.

However, calculating the right number of seats does not guarantee success if the internal atmosphere is lost. This is what happened in the Matmut Atlantique Stadium in Bordeaux. Its attractive architectural proposal, a completely open forest of columns, is inspired by the near Landes Forest, the biggest in Western Europe and a symbol of the region. This is a marvelous architectural design, but it does not conserve the warm atmosphere of the old stadium which has made the FC Girondins supporters famous for being one of the most passionate in France. In this case, the problem is not the increase in its capacity by ten thousand seats, which are filled. The problem is focusing just on the attractive outside. Today not even a full stadium can transmit the warmth and passion of the supporters.

Once the appropriate number of seats is chosen, it is vital to choose their type. The premium and club seats can generate an important income compared to the tier ticket, and they can even determine the financial viability of a project. As part of the business plan, a thorough study of the profile of people who enter the stadium should be carried out in order to analyze the amount in each type and their demands. The idea is to provide them not only with the space but also with a great experience respecting quantities and characteristics. To do so, the collaboration between the architect and the project manager becomes vital. As a result, a new trend has emerged in the United States: asymmetrical stadiums. 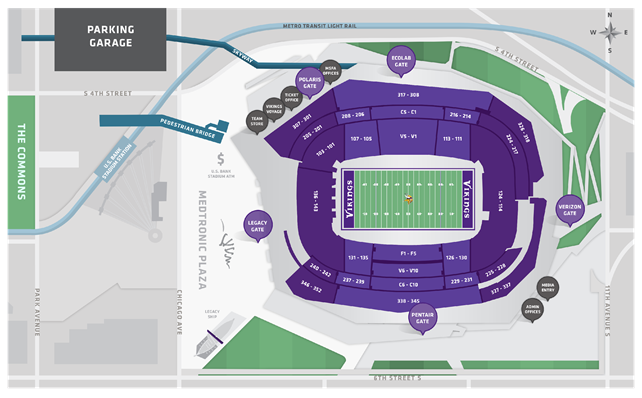 The asymmetrical shape is determined by the layout of the stands in the corners. To avoid having seats with restricted or no view, the stands form irregular trapezoid shapes which are also different in both back parts. This is the case in Mercedes Benz in Atlanta and in the U.S.  Bank in Minneapolis. In these types of stadiums, the cost of the seats in the stands is determined by their distance from the field and not by their quality of vision, contributing to greater ticketing revenue. Besides, taking advantage of the back parts in that way makes it possible to have more space for the premium seats in the center stands, taking advantage of all the possible seats.

There is no formula to guess the right number and type of seats in a stadium. This should always be calculated individually and based on the business plan of the stadium, the place where it is located, and the characteristics of the spectator who will attend. And of course, when building or remodeling them, it is necessary to transform them into unique spaces. There is no greatest guarantee of success in the future. And there are no formulas.