How does the physical and technical-tactical performance of football players evolve throughout their sports career?

SIGN UP FOR THE CERTIFICATE IN PSYCHOLOGY FOR HIGH PERFORMANCE SPORTS

Top-level athletes are getting older and older. Technology, materials, nutrition, preparation, injury prevention, financial investment, scientific knowledge, and the excellent level of coaches are some of the factors that have lengthened players’ careers. In tennis, for example, the average age of the top-100 tennis players in the ATP (Association of Tennis Professionals) ranking has gone from 1985 to 2017, from 25 to 29 years. If in 2003, there were only ten players over 30 years old in the top 100; in 2017, there were 41. In swimming, the average age of Olympic medalists from 1964 to 2012 increased from 17.6 to 22 years for women and from 20.8 to 24.5 for men.1 Football is no stranger to this phenomenon of aging athletes. The average age of players who participated in the Champions League between seasons 1992-1993 and 2017-2018 has increased by 1.6 years, from 24.9 to 26.5.2

Professional football players usually finish their sports career between the ages of 31 and 35, with an average duration of 8 to 11 years in the elite.3 Some studies have shown that the maximum performance age is between 25 and 27, depending on the game position. Forwards appear to reach their peak earlier (around the age of 25) than midfielders and defenders (at about age 27).2,4-8 However, much less is known about the evolution of players’ performance from that peak to their sporting retirement.

A recent study has analyzed the age effect on the physical and technical-tactical performance of the players in LaLiga Santander.  9 For this purpose, the in-competition performance of 154 players who participated in the competition between the 2012/2013 and 2019/2020 seasons was analyzed. The inclusion criterion is to have played at least 5 full matches each year for at least 5 seasons in the period analyzed.  The novelty of this work is that it is a longitudinal study. The same player has been studied throughout his sports career in LaLiga since he was very young until he retired from sports. 14,902 observations have been collected with an average of 15.2 ± 7.0 games per player and season. The analysis included the performance of 37 centre-backs (3769 observations), 44 full-backs (4233 observations), 34 midfielders (3281 observations), 22 inside forwards (1535 observations), and 17 forwards (1274 observations).

The first figure shows how the total distance covered by football players is reduced by 0.56% per year from the highest value, which is reached when they are younger. The distance covered at a high intensity (> 21.0 km / h) and the number of high-intensity sprints also decreased by 1.80% and 1.42% each year, respectively. However, the percentage of successful passes increases by 0.25% per year. 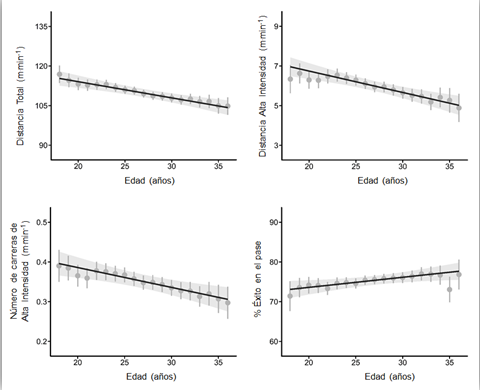 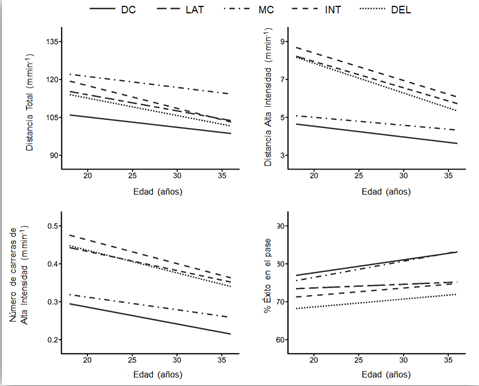 In short, the average age of football players has increased in recent years. Players are getting younger and younger and this aging manifest itself in all specific positions in a similar way.  Physical performance (distance traveled at different intensities, maximum speed, and acceleration-deceleration) is significantly reduced after the age of 30 and even more significantly after 35. However, technical-tactical performance (passes, successful passes, kicking effectiveness, etc.) seems to improve slightly as players get older. This information could be beneficial for club managers and coaches to guide decisions about hiring players, salary, contract length, or when to replace a player. It seems that the full-backs, inside forwards, and forwards are the game positions most affected by age. It is advisable to customize the training plans and the training load during the microcycle according to the football players’ age.

5Jamil, M., and Kerruish. S. (2020). At what age are English Premier League players at their most productive? A case study investigating the peak performance years of elite professional footballers. International Journal of Performance Analysis in Sports, 20(6), 1120-1133.