How does the menstrual cycle and contraceptives influence women’s performance?

SIGN UP FOR THE Certificate in Team Sports Physician

High performance sport is becoming more equal, and women participate as much as men in most disciplines. Nevertheless, scientifically speaking, most studies still focus on men to carry out research on sports performance, so there is much less evidence regarding women’s exercise physiology. This is of great importance, given that the results observed in men may not directly apply to women as they have different physiological characteristics, the menstrual cycle being one of them. 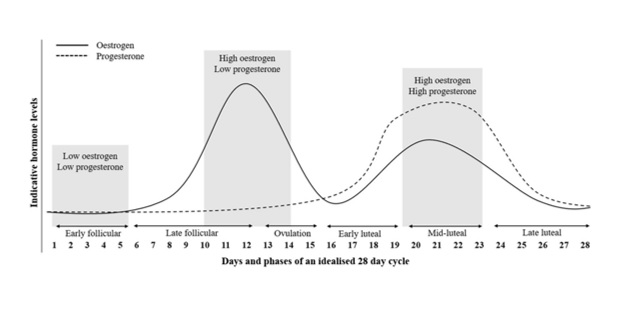 The effects of the menstrual cycle on performance

Therefore, it is normal that there’s a concern over the potential effects of the menstrual cycle on sports performance. But what can science tell us about this? To answer this question, a systematic review has recently been published in the prestigious Sports Medicine journal.2 The authors analysed studies involving adult eumenorrheic women (i.e. with a normal menstrual cycle) who did not take contraceptives, and comparing the effects on sports performance between the early follicular phase (taken as reference) and the other phases of the menstrual cycle. In the end, the authors found 76 studies with these characteristics that included more than a thousand participants. When generally meta-analysing those studies, results showed non-significant, trivial effects (ES = -0.06) on performance during the early follicular phase in comparison to the rest of the phases, finding some studies that showed better performance during some phases and others during different ones. Moreover, they found similar results when analysing the markers of strength and endurance performance separately.

As this meta-analysis concludes there is not enough evidence to support a significant effect of the menstrual cycle on performance, it has been proposed that performance in the early follicular phase may be affected due to the low levels of progesterone and oestrogen of this phase. In fact, due to the potential benefits of oestrogens at a muscle level (producing anabolic effects and increasing the antioxidant response and the stabilisation of muscle fibre membranes, which could reduce muscle damage) the benefits on performance could potentially appear during the late follicular and ovulatory phases, when the levels of progesterone are low. However, as we have seen, the evidence does not consistently support that the menstrual cycle has an influence on performance.

The effects of contraceptives on performance

Considering the potential negative effect of low oestrogen levels on performance, another factor that could be argued to be detrimental in athletes are oral contraceptives (prescribed not only as a contraceptive measure but also to regulate the menstrual cycle and alleviate symptoms of dysmenorrhea and menorrhagia) as they decrease the endogenous production of oestrogens and progesterone. In this sense, the same research group of the meta-analysis mentioned above published another meta-analysis in the same journal assessing the effects of contraceptives on performance.3 For that, they included studies comparing the performance of women who took contraceptives and women who did not. In general, they did not find any differences, and if they had done, they would have been trivial differences (in favour of those women who did not take contraceptives). Moreover, the authors analysed studies comparing the same participant on and off contraceptives (both because they stopped taking them and they were in a phase they did not have to), and the effects were again trivial and non-significant. Finally, the authors tried to find randomised clinical trials comparing contraceptives and placebo, and they could only find one study. It is worth highlighting that, in that study, taking contraceptives was related to a worse aerobic capacity (maximum oxygen consumption) and an increase of skin folds, but there were no differences in other markers for strength, speed or endurance.4

As we can see, despite the potential effects of variations in hormones such as oestrogen and progesterone during the menstrual cycle or when taking contraceptives, current evidence does not consistently show any significant effects on performance. This does not mean that the menstrual cycle should not be controlled. In fact, this will be important to analyse its regularity and to identify potentially stressing situations affecting it. Also, what most studies have in common is the heterogeneity observed among the different participants. Therefore, although there were no significant effects in general, the individualisation of training and competition should be prioritised in order to adapt the stimuli to each athlete according to their conditions at any given time.

Blood flow restriction or BFR has become popular in the last few years in the training and physical therapy field.

The Incidence of Patellar Tendinopathy in Professional Football

Last year, the 30th of December, FC Barcelona issued a statement making it official that its goalkeeper Marc-André Ter Stegen suffered from tendinopathy in the right knee that required treatment

Gil Rodas: “Barça medical services have to be prudent, but never conservative”

Their mission at Barça is to work outside the immediacy of everyday life. Not to look just at the next game or the next season, but by means of the scientific method to look miles beyond the present, within a decade.

THE ROLE OF THE NUTRITIONIST AND SPORTS PSYCHOLOGIST DURING INJURY RECOVERY

The first question that almost all players ask after getting injured is: “When will I be able to play again?” The return to the pitch or return to play (RTP) is seen as that magical day in which the player returns to fully enjoy the sport, at the same level or even better than before, as if the injury had never occurred.

Muscle injuries are a major concern in the world of football. Therefore, the focus on preventive strategies for muscular injuries is fundamental.

The SARS-CoV-2 (COVID-19) health crisis has made our society take extraordinary measures affecting all aspects of our lives, and sport could not be less.

Tendinopathy is one of the most common injuries in elite sport.

The anterior cruciate ligament rupture (ACL) is a complicated injury for football players.

INTERNAL COMMUNICATION BETWEEN THE MEDICAL STAFF AND THE COACH IS KEY

During the last two decades, the muscle injury ratio and the players’ attendance to the training sessions and competition matches have remained stable in male professional football.

THE RISK OF TENDINOPATHY IN ELITE ATHLETES, IS IT IN THE GENES?

In an attempt to reduce injury incidence, new research is being conducted to identify the main risk factors.

In basketball, as in any other professional sport, the possibility of a shift in a medical paradigm can create a big buzz in the news.

Injuries are one of the main concerns in the world of sports as they are the primary reason which interrupts an athlete’s training program.

Since 2001, hamstring injuries – the most frequent kind of injury – have been increasing by 4% each year.

Designing injury prevention programs is a top priority for coaching staff in the pursuit to reduce the incidence of injuries.

CONTRARY TO WHAT WAS EXPECTED, THE LENGTH OF THE FREE TENDON DOES NOT INFLUENCE THE BICEPS FEMORIS RECOVERY

The relationship between health and athletic performance go hand in hand, and elite sports couldn’t be understood without the direct supervision of specialized doctors.

ISOMETRIC STRENGTH OF THE POSTERIOR CHAIN: ITS IMPORTANCE IN FOOTBALL AND HOW TO MEASURE IT

In football, hamstring injuries have been shown to account for up to 37% of muscle injuries.

Facilitating proper recovery after training sessions is essential to improve the athlete’s performance.

RECOMMENDATIONS FOR TRAINING AND COMPETING IN HEAT

When athletes train or compete in a hot environment, their body temperature increases and a series of mechanisms for eliminating heat are triggered.

THE PLANTARIS TENDON, A NEW PLAYER FOR RESISTANT ACHILLES TENDINOPATHIES

Chronic Achilles tendinopathy is one of the most common tendon disorders, both for athletes and for people who are not necessarily involved in sports.

FC Barcelona’s first team doctors Mindaugas Gudelis and Ricard Pruna reviewed a series of cases and carried out a brief clinical analysis of familial hypercholesterolemia in high-performance athletes in an article for the scientific journal Apunts Medicina de L’Esport.

An article published in the scientific journal Medicine & Science in Sports & Exercise has shown that a FATMAX stress test on professional footballers not only provides cardiovascular fitness levels, but also helps to understand the players’ main energy metabolism.

HOW CAN YOU TRAIN YOUR GUT FOR EXERCISE?

Up until a few years ago, it was considered normal for sportspeople to have digestive problems while exercising.

MAGNETIC RESONANCE AND MUSCLE INJURIES: AN ANALYSIS OF THE CLASSIFICATIONS AVAILABLE

Muscle injuries make up more than 30% of sports injuries. It occurs that a professional football team can expect to suffer an average of 15 incidents related to muscle injuries per season