Effects of Exercise on Immune Function, A Double-edged Sword?

SIGN UP FOR THE CERTIFICATE IN TEAM SPORTS PHYSICIAN ESSENTIAL CONCEPTS

Nobody calls into question that exercising is beneficial for our health. Besides, these benefits are multisystem, which means that they affect the many systems of our body in a coordinated way (e.g., cardiovascular, musculoskeletal, etc.) One of these systems is the immune one, divided into the innate immune system and the adaptive immune system. Among many other functions, these systems are in charge of protecting us against infections, and their importance has been proven during the COVID-19 pandemic. But, how does exercise affect our immune system?

Benefits of Exercise for the Immune System

There is ample evidence that regular exercise can improve our immune system.1 For example, many pieces of research have shown that cytotoxicity (this is, the ability to “attack” antigens) of the Natural Killer cells (NK, one of the main protagonists of the innate immune system) is higher in athletes than in sedentary people or people who do not exercise.2,3 In fact, taking part in a progressive training program (for example, 4 weeks of continuous moderate aerobic exercise followed by 4 weeks of intense interval training or HIIT) has proven to increase the number as well as the activity of such cells,4 which results in a stronger immune system. Besides, people who exercise seem to have a more efficient adaptive system, which is obvious after a vaccine. This way, recent research showed that elite athletes have a higher cell response (a higher increase of T cells) as well as antibody response after the flu vaccine,5 which could have special importance in a current issue as vaccination against COVID-19 is.

Can exercise hurt the immune system?

So, there is no doubt that exercise is beneficial for the immune system. However, traditionally it has been argued that strenuous exercise (especially intense prolonged exercise) can lead to immunosuppression, this is, making the immune system weaker and posterior infection susceptibility. For example, research that included samples of over 2000 athletes observed that the athletes who did higher volumes of aerobic training, such as cyclists and triathletes, had a lower number of white blood cells (cells in charge of the defense against inflammations) than other athletes.6 In fact, 16% of these athletes showed values below the reference ones.6 Besides, as strenuous exercise provokes acute temporary (1-2 hours after it) reduction of diverse immune cells (e.g. Lymphocytes T) in the blood. There are many people who support the post-exercise ‘open window’, this is, an immunosuppression process that increases the risk of infections right after doing physical exercise.   In fact, some researchers have observed a higher prevalence of infections (especially respiratory ones, such as bronchitis) in resistance athletes compared to the general population,7 which could probably be caused by a weak immune system due to high training loads.

So, many propose that the relationship between exercise and health of the immune system could follow a ‘J’ curve. Training with moderate intensity/duration could be beneficial, while strenuous exercise could hurt the system. It is important to say, however; that a lot of controversy about it remains. This way, more recent evidence suggests that exercise does not provoke the so-called “open window”, but a reduction of immune cells in the blood because those cells move from the blood to peripheral tissues, for example mucous membranes, in which they have a more important role at that moment (Image 1).8,9 Similarly, controversy remains as regards higher susceptibilities to infections in athletes compared to the population in general, since other factors than exercise, such as going to places where there is a mass audience (e.g. stadiums), nutrition, stress, trips or sleep could contribute to the risk.9 So, more researches are necessary in order to confirm if physical exercise, especially when it is excessively strenuous, could cause an immunosuppression process that increases the infection risk. 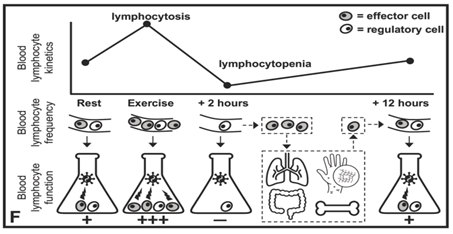 Regular exercise means huge benefits for our immune system, making us more resistant to possible infections. On the contrary, controversy remains whether intense prolonged exercise reduces in a temporary acute way our immune response, however; recent researches have questioned this hypothesis. So, it would be necessary to adapt working loads to keep our immune system in the best conditions, but more important is to avoid stressors that could weaken our immune system (e.g., extreme environments, large crowds, stress, sleep deprivation, inadequate nutrition).