Does an elite athlete (actually) know how to eat?

Sign up for Certificate in Sports Nutrition for Football

It is usually believed that elite athletes are professionals that not only dominate the sport they practice, but also have a deep knowledge about an important topic that has a great impact on their health and performance such as nutrition.

A recent study (Vázquez-Espino, Rodas-Font, Farran-Codina 2021, read ref. 1) about sports nutrition, attitudes, sources of information and dietary habits of athletes has shed light on the knowledge they really have about the topic.

The importance of nutritional knowledge

Nutritional knowledge is one of the factors needed to establish proper eating habits, and it is important to optimize athletic performance for any athlete, especially the elite ones. In fact, there is broad agreement on the direct correlation between a proper nutritional knowledge and an increased fruit and vegetable intake (read ref. 2,3), as well as a decreased fat intake (read ref. 4).

Many factors motivate food selection, dietary behaviour, and attitude towards nutrition. Factors such as cultural background, taste preferences, appetite, and nutritional knowledge (read ref. 5) affect the decisions and dietary behaviour of the population and of athletes. Changes in body composition or aesthetics can also influence the dietary behaviour of an athlete. In the case of adolescent athletes, peer pressure and the choices of teammates seem to be key influencing elements.

Sometimes, athletes rely on other sources such as media, parents, friends, teammates, coaches, and physical trainers. All these sources can influence their dietary behaviour, providing limited or inaccurate nutritional information at times. Previous research showed that lack of knowledge and the dissemination of incorrect nutritional guidance are harmful, especially for athletes (read ref. 6).

How was the study performed?

In the Vázquez-Espino, Rodas-Font, Farran-Codina study, nutritional knowledge of FC Barcelona players, and the level of self-perceived nutrition knowledge, dietary attitudes towards nutrition, sources of information and dietary habits were assessed.

To do it, nutritional knowledge of the FC Barcelona players was assessed, diving into the difference in knowledge among the different teams (football, roller hockey, futsal and basketball), the coaching staff of the club (coaches, physical trainers, physiotherapists, and physicians), and a sample of non-athletes of different ages and nutritional education levels.

The groups of people that were neither athletes nor formally educated in nutrition included high school students and philosophy students from the University of Barcelona (UB). These two groups were selected because their ages were in the range of most athletes in the sample (13–25 years) and they had not received any formal education in nutrition.

Finally, the group of non-athletes with a formal nutritional education was formed by students attending the final year of Human Nutrition and Dietetics at the UB.

To assess the nutritional knowledge the questionnaire Nutrition Knowledge Questionnaire for Young and Adult Athletes (NUKYA) was used, and the study protocol was approved by the Ethics Committee for Clinical Research of the Catalan Sports Council.

Which nutritional knowledge do athletes actually have and which they think they have?

The data obtained from the test and the comparison of the scores indicate that athletes have the same level of nutritional knowledge as high school students and philosophy university students, and they were much lower than the scores of the sports coaching staff and the students of the last year of the course of Human Nutrition and Dietetics.

There were no significant statistical differences in the mean scores of the NUKYA when comparing athletes who actively searched for information about nutrition to those who did not.

Finally, athletes who got nutritional advice had a greater nutritional knowledge (or score in the test), even though there was no statistically significant difference with those who had not. This is because the specific consultation with indications about what to eat is not nutritional education. 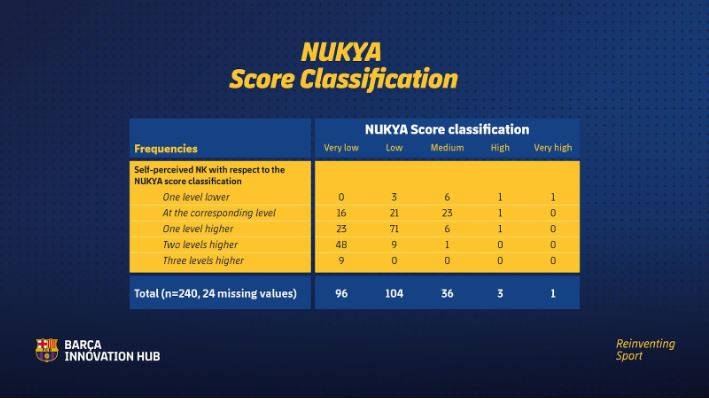 Which are their sources of information?

Family represented an important source of information, probably because the sample had a high percentage of adolescents (30 % < 15 years.)

Athletes who used to go to a dietitian for advice, and who consumed supplements had higher NUKYA scores, but surprisingly, there were no differences in the NUKYA scores between players who have consulted a dietitian as a source of information and those who hadn’t. The thing is that even though dietitians were reported as the main sources of information (57%), only 13% of the players regularly visited the dietitian office.

The results of the study showed the importance of developing a nutritional education plan for athletes which includes, apart from basic and clear concepts for their day-to-day, aspects such as the proper selection of sources of information (especially from the Internet.)

The plan should be also directed to families in case of younger athletes, and to the coaching staff (to avoid possible mistakes and inconsistencies in the information received by athletes.) Professionals with expertise in sports nutrition should have an outstanding role as source of information and advice for players and members of the sports coaching staff.

Besides, nutritional education should include information about supplements and make emphasis on the importance of not consuming them without a proper prescription. Athletes seem motivated to consume supplements due to their interest to improve their performance over the dietitian advice. This tendency should be corrected because supplement intake should be prescribed and supervised by health professionals.

We should also be attentive and give priority to the cases of athletes with low levels of nutritional knowledge and high levels of overconfidence. These cases are typical among adolescents. Players with lower NUKYA scores tended to perceive their nutritional knowledge as higher than it really was. Overestimation of their knowledge could lead individuals to incorporate inappropriate dietary practices being convinced that they are beneficial without considering the need for advice from a health/nutrition professional.