Do players run less in the second half of a game?

Professional footballers’ physical performance has been widely studied over the last 25 years. Several studies have shown that there is a loss of performance in the second half of games, specifically in the total distance travelled and the meters covered at near-top speed as well as in the number of sprints. This loss of performance could be caused by muscle glycogen depletion and demanding thermal conditions due to dehydration and consequent hyperthermia.1,2

However, some recent studies have suggested that the reduction in the distance covered in the second half of the game may be non-existent. Other studies have also revealed that the effective playing time (game duration after subtracting the time that passed between breaks, substitutions of players, goals, and injuries, i.e., the time in which the ball is not in play) can explain why the players cover fewer meters in the second half. On average, there are 108 interruptions per football game, which is halted for 38% of the total game time observed.3 The duration of these interruptions increases towards the end of the game, and this is likely to affect the players’ physical performance.4 In the German Bundesliga, it has been proven that the effective playing time varies enormously from match to match.5 During the first quarter of the game, the time in which the ball is in play accounts for 66.3% of the total time, whereas such value is of 55% in the last quarter of the game. The reasons explaining such data indicate that the teams that are winning when the score is even, spend twice as much time in the corner and goal kicks as well as in the fouls.6 The interruptions of the game are used as a way to kill time.7 In LaLiga from Spain, it has been stated that the effective playing time in the second half of games is lower, between 3% and 5% when compared to the first half.

(2) When the total playing time is considered, it can be seen how all the physical performance variables have a significant decrease in the second half of games, ranging from 5.86% to 11.09%. (See Figure 1).

(3) However, when the effective playing time is considered, the total distance and the low intensity running increase significantly in the second half by 1.52% and 2.91%, respectively. The distance covered at near-top speed and when sprinting was similar between both periods. These results apply to all teams regardless of playing at home or away, the score or the level of the teams.

(4) The difference in physical performance between the first and second half depends on the specific position. While external defenders and external midfielders kept up their performance in the second half of the game, central defenders and central midfielders significantly increased the distance covered when sprinting in such half. In contrast, forwards covered significantly fewer meters at near-top speed and when sprinting in the second half of the game.

Although these results should be taken with caution due to the complex nature of football, they can be useful to reconsider the relationships between playing time and players’ fatigue as well as to better understand the physical demands of the game. Rather than total game time, effective playing time should be considered to quantify the demands of the game more precisely. 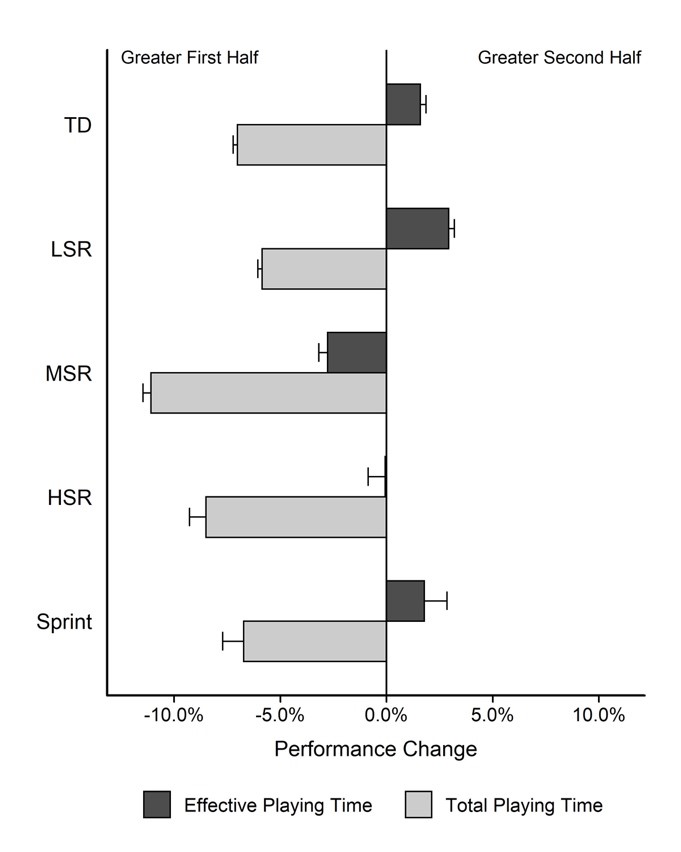 8 Rey E, Kalen A, Lorenzo-Martinex M, López-Del Campo R, Nevado-Garcia F, Lago-Peñas C. (2021) Elite soccer players do not cover less distance in the second half of the matches when game interruptions are considered. J Strength Cond Res. Ahead of print. 2021.