THE IMPORTANCE OF BIOSTATISTICS IN SPORTS SCIENCE AND SPORTS MEDICINE

SIGN UP FOR THE PROFESSIONAL DIPLOMA IN TEAM SPORTS PHYSICIAN

Statistics are currently a frequently used concept in the world of sports which has sparked interest in different professionals such as managers, analysts, video analysts, data journalists, physicians, physical trainers, physiotherapists, psychologists, nutritionists, coaches and even in the players themselves. Despite this increased interest, we should keep in mind that, statistics is primarily a young science based on data, and its objective is to measure, control and communicate data.

Statisticians are not only known as those who describe variability or fit statistical models to help in decision-making but they are also involved in study designs and in assuring the accurate use of “c-speak”, a language shared by statisticians and professionals or executives in the field, which is sports in this case. Today, sports statistics is often referred to with the term Sports Analytics.

Sports Analytics has grown exponentially thanks to IT sciences and it also encompasses other subareas (e.g. sports sciences, behavior sciences, medicine or data visualization) in addition to statistics with a focus that is more tactical and sports performance related (1).

We are experiencing a new culture to deal with data that probably seeks to make changes to the organization. In sports analysis, just like in other fields, this will not be an immediate change. For now they have started to create and renew sports analysis departments within sports clubs to initially allow for different professionals from a coaching staff team (analysts, physical trainers, physiotherapists, coaches) to work closer with data scientists. In part, thanks to the movie Moneyball, this has produced constant technological innovations that are now available, popular sports analysis conferences like the Sloan, or recent work from sports scientists such as, Tim Gabbett.

Biostatistics is one of the most established specializations in statistics. It combines advanced statistics skills  applied to health sciences. The growth of this specialization has taken place, more than anything in the academic world with the creation of prestigious departments and biostatistics and epidemiology associations that are already established all around the world. But, are there also specializations in sports statistics? Of course. Starting with sabermetricians there are also moneyball or scouting professionals, sports analysts, and also the role of sports biostatistician that combines advanced statistics skills, epidemiology, public health, sports medicine and sports science, as can be seen in Figure 1. This new profession was proposed by the researchers Caroline Finch and Martí Casals in their last work published in Injury Prevention and the British Journal of Sports Medicine (BJSM) which detail the new opportunities for this role and also highlight that biostatistics can help with injury prevention and looking after an athletes’ health (2, 3). 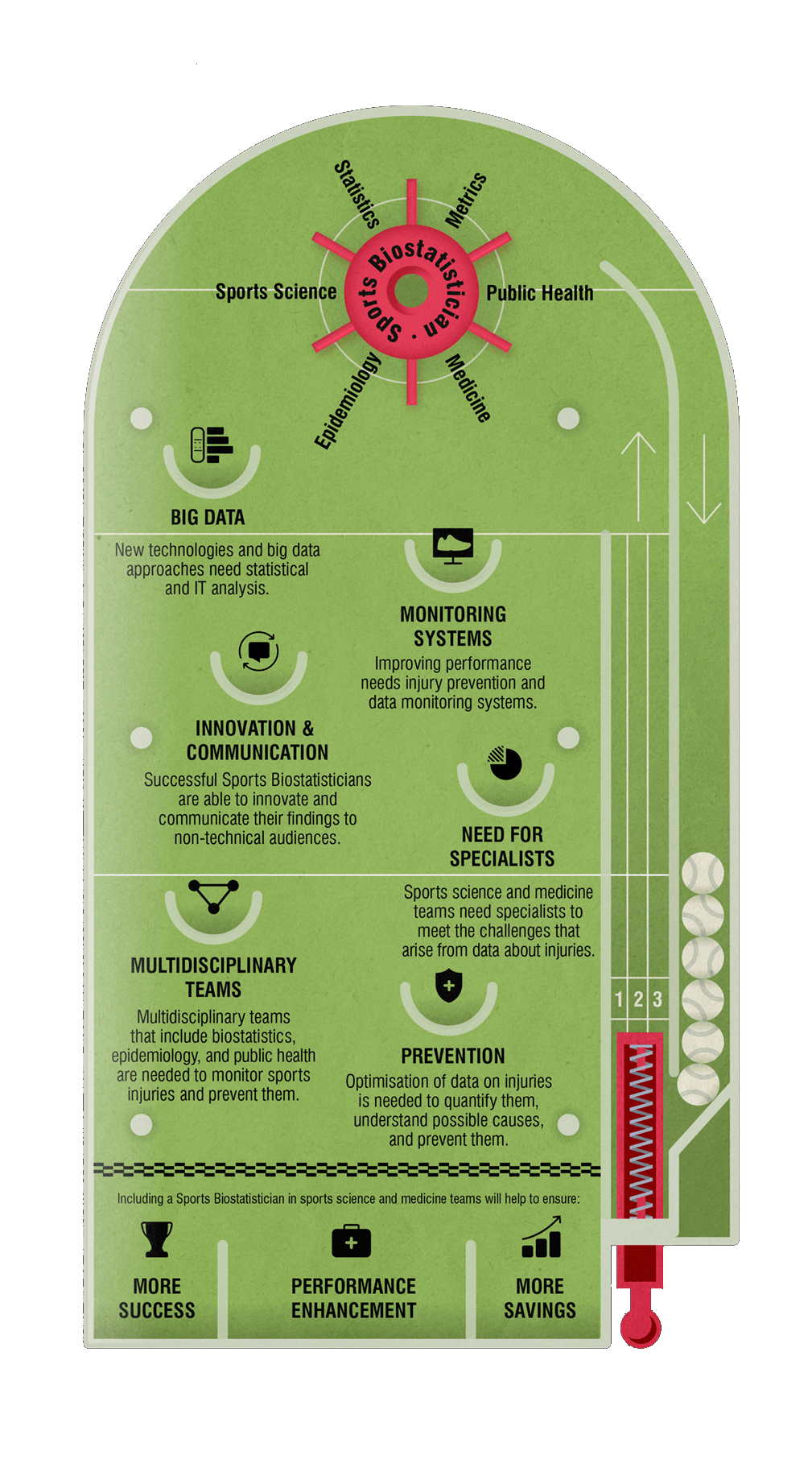 Some of the most important functions of the sports biostatistician include:

This is a clear example of how statistics and biostatistics can be included in the different sports professionals, and how synergies can be created among sports sciences and medicine communities with statistics.