As part of the FC Barcelona U.S. tour, the Barça Innovation Hub (BIHUB) has organised a forum on innovation and sport, bringing together recognised industry leaders and specialist academics in sporting innovation. The event, in collaboration with the San Francisco 49ers, was held at the Levi’s Stadium, Santa Clara(California).

The club delegation was headed by first vice-president Jordi Cardoner, who introduced the forum explaining the role of the BIHUB as a project that forms part of the Més que un Club identity. This was followed by two round table discussions.

The first, entitled Implementing Innovation in Sports saw discussion on the implementation of innovation strategies in the sector. Participating were: Brano Perkovich, Chief Investment Officer of the San Francisco 49ers; George Foster, Director of the Sports Management Initiative at Stanford; Henry Chesbrough, director of the Garwood Center for Corporate Innovation Berkley-Haas; and Albert Mundet, head of Knowledge at the Barça Innovation Hub. 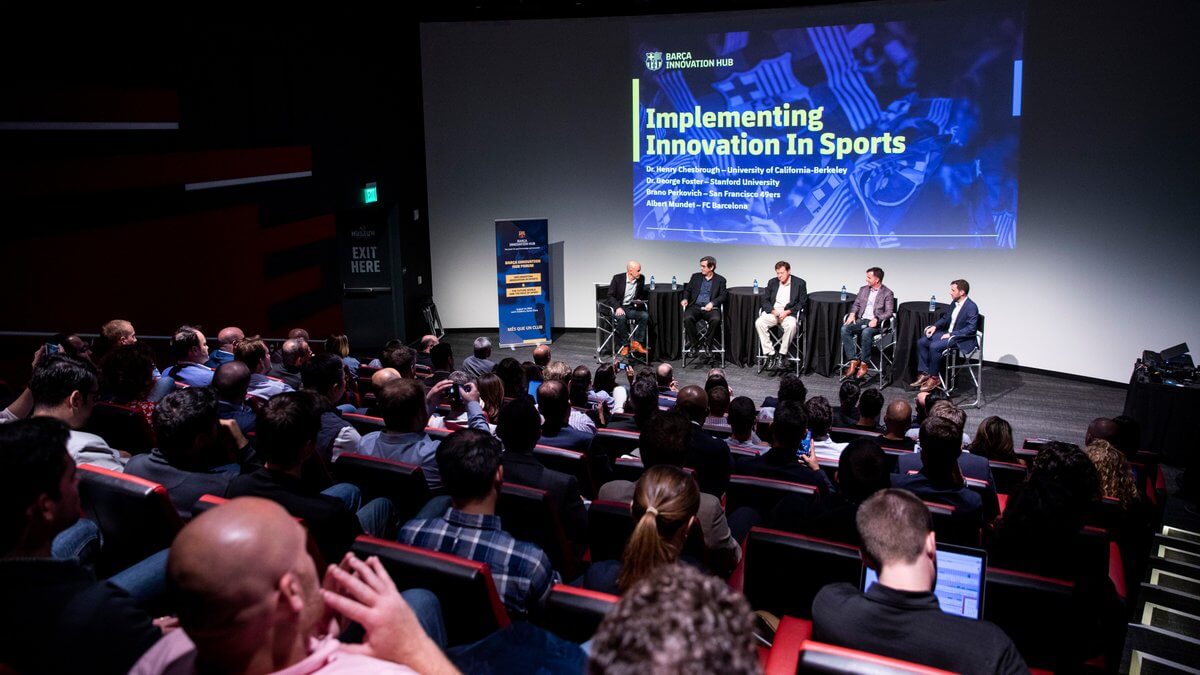 The second round table, The Future World and The Role of Sport, featured: Enric Llopart, Digital Director for FC Barcelona; Mark Wan, Managing Partner of Causeway Media Partners and Co-Owner of the San Francisco 49ers; and Jen Panasik, Managing Director of IDEO.

Steve Gera, a well-known figure in sports innovation who works with BIHUB moderated the event, which was attended by around one hundred university lecturers, businesspeople, members of start-ups and active agents of innovation.

Before the forum, the members of the board attending the event – first vice-president Jordi Cardoner, director and commissioner of Espai Barça, Jordi Moix, treasurer Enrique Tombas and directors Emili Roussaud and Dídac Lee, along with executives of five-time Super Bowl winners the San Francisco 49ers, visited the Levi’s Stadium, a benchmark in the implementation of new technologies and an example of sustainability.

It even includes a rooftop organic orchard whose produce is then sold at the restaurants in the stadium. Opened in August 2014, it was the venue for Super Bowl 50 in February 2016 and is considered one of the finest venues in the NFL.

3 hours or 90 minutes: the benefits of having fans inside and around the stadium

It is a cultural and historical heritage what separates the way in which fans enjoy sports in Europe and the US.

The Democratisation of Sports Broadcasting with Pixellot

It is possible to watch all matches of any sport, all categories, male, or female, including lower divisions, and even matches between fans. This scenario is now possible thanks to the technology.

Conflicts of interest: the influence sponsors in sports cancellations

Never in the modern history of sports were major sporting events expected to be cancelled or postponed. Neither those that are planned long in advance, such as the Olympics, nor those happening every year, such as the national and international leagues.

New opportunities in the day after: sponsorship contracts in 2021

2020 was going to be a historic year for sports sponsorship. Major sponsors have kept their investments, while companies that were most affected by the pandemic have drastically reduced their advertising and sponsorship budgets.

Education and elite athletes in the 21st century

New study methodologies of the 21st century and an unexpected change due to the pandemic is setting the stage for change.

Multinaming: When a Giant Looks for a Stadium

The third source of income for a club’s sponsorship, is the naming rights of the stadium.

Is it possible to innovate or come up with new ideas in the sports industry using the chef’s technique? How can adapt these insights to our process? What have we learned?

The last edition of Barça Sports Science Week was held from October 8 to 11 at Camp Nou. More than 1200 visitors and more than 60 speakers from 53 different nationalities attended to learn about the latest advances and case studies in sports science.

We are pleased to announce our venture with Coplays. A Finnish app for coaches, allowing them to easily create animated drills, plays and drawings which are convenient to their needs.

Barça Innovation Hub: A Great Sports Laboratory for the Future of Sport

One of the fundamental principles of the Barça Innovation Hub is the conviction that, in scientific research and innovation projects, collaboration between different types of entities generates more efficient and robust results which are suitable for the needs of end users.