Are there psychological goals in football?

SIGN UP FOR THE CERTIFICATE IN PSYCHOLOGY FOR HIGH PERFORMANCE SPORTS

Research about the existence of the psychological goal, and its influence on match outcome, is scarce. The work that has more accurately analyzed whether the best/worst time to score/receive a goal is just before half-time is based on the analysis of 1,179 UEFA Champions League and UEFA Europa League matches between the 2008 and 2014 seasons.1 We should note that all games in which the teams did not risk anything have been excluded, either because they were already eliminated from the competition or already classified as first in their group. In 9% of the games, the team scored between minute 45 and the end of the first half. The percentage rises to 17% when the goals scored from minute 41 to the end of the first half are counted.

According to the mathematical model proposed by the authors, if the local teams score a goal between minute 45 and the end of the first half, it is expected that the goal difference at the end of the match will fall by 0.52 goals. In other words, if the home team scores 1-0 in the discount time, the game’s result is likely to be a tie. However, scoring a goal at another point in the first half does not have that negative consequence. Goals scored by visiting teams in the extra time in the first half did not affect the final goal difference between the teams. In other words, there seems to be a psychological effect when home teams score a goal in the extra time of the first half. But the consequences are not favorable—quite the opposite. In addition, it does not seem to affect either positively or negatively visiting teams for scoring a goal at that time. Table 1 shows the result of the matches, based on the score of the 1st half and the goals and red cards that occur in the extra time of the first half.

Reasons for a possible psychological goal

The researchers found two other relevant factors to explain the final score of the matches. A home team’s expulsion in the first half reduces the goal difference by almost one goal at the game’s end. If at the end of the first half the team is winning by 1-0, but a player is sent off, the expectation is that the team will end up tying the game. Furthermore, the goal difference at the end of the first half is crucial in explaining the result. The researchers also showed that the same effect of scoring a goal close after minute 45 and before half-time is also present, although with slightly less force when a goal is scored in minutes 41, 42, 43, and 44.

The reasons that can explain this unexpected effect of psychological goals are diverse:

However, as suggested by Pep Marí, no specific goal is psychological. All goals are psychological because all can have positive or negative consequences for teams. It depends on how the teams manage those moments. We must have resources to ensure that a partial success in the game, such as a goal, does not negatively affect our team. That a goal in favor does not turn against has a lot to do with controlling the players’ activation, the preventive work to acquire adequate individual and group responses in crisis moments, setting specific objectives for the second half instead of going out to win without further action or having well-trained technical-tactical reactions for each match scenario.2,3 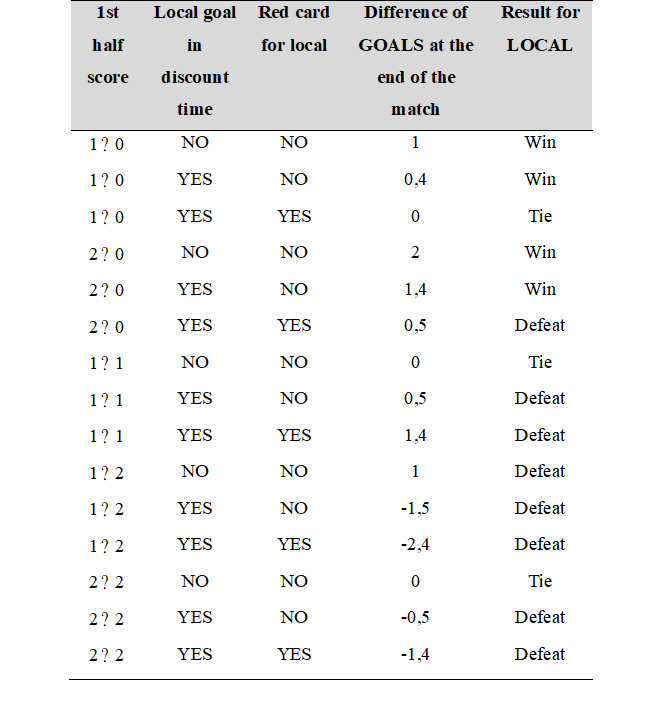