Sign up for Certificate in Team Sports Physician Essential Concepts

Anterior cruciate ligament (ACL) injuries have become one of the biggest concerns in women’s football. It is a threat to female players and can mark a turning point in their careers due to the long recovery time, currently around 9-12 months, and the likelihood of relapse. Dr. Eva Ferrer, Specialist in women’s health and sport at Barça Innovation Hub, and Dr. Javier Yanguas, Doctor of FC Barcelona women’s team and lower categories, analyse this matter in depth.

In the last season, ACL injuries have had a big impact on FC Barcelona’s first team, affecting Jana Fernández, Cata Coll, Bruna Vilamala and Alexia Putellas. While these are alarming figures, they are a reflection of the reality that prevails in women’s football, as Dr. Ferrer explains.  “Obviously, that’s a lot of absentees for a single team, but it’s within the statistics of women’s football. Figures published in the scientific literature show that women suffer two to eight times more cruciate ligament injuries than men. While gender is one of the predisposing factors due to women’s anatomy and biomechanics, this cannot be attributed to one single factor.”

The problem of ACL injuries has become one of the main topics in the media due to its incidence in the FC Barcelona women’s first team, but Dr. Yanguas explains that this type of injury has always occurred with some degree of frequency, both inside and outside the club: “A few years ago we started to identify that we had more anterior cruciate ligament injuries than might seem typical. One might think that this was an exceptional incident at our club, but when you look at the literature and share information with other colleagues – such as those at the Mutualitat Catalana de Futbolistes, who look after a large number of players – you realise that this injury has been on the increase for some years now, both in the paediatric population and in women’s football.”

Both doctors agree that there are a number of modifiable factors that can be acted upon to minimise the risk of ACL injuries. It is the duty of the medical staff to identify them and implement the necessary exercises focusing on muscle strengthening work or neuromuscular activation. However, there are other factors that are more difficult to control, such as anatomical and hormonal factors.

With regard to anatomical factors, Dr. Yanguas focuses on dynamic valgus, a movement pattern that the female population is more prone to perform and that can favour ACL rupture. “When landing after a jump, the female population is more prone to dynamic valgus. That is, at the moment of landing, the knee goes inwards. When this happens, there is a failure in neuromotor control which is a stressful movement for the anterior cruciate ligament and, therefore, can lead to its rupture. Identifying all players who have this dynamic valgus pattern at the moment of jump reception is key to develop muscle retraining to ensure that the knee falls fully aligned at the moment of landing.”

In addition, the activation of the hamstring muscles upon landing a jump is one of the causes of this type of injury. “There is another pattern that seems to indicate that, at the moment of jump landing, men activate the hamstring muscles earlier to provide a point of stability to the knee. It seems that, for women, this activation is delayed by a few milliseconds, which may be one of the reasons for the higher percentage of injuries in the cruciate ligament. Addressing these two aspects is essential to reduce the incidence of injury.”

Regarding hormonal factors, several articles have pointed to menstruation and the menstrual cycle as the main factors in the development of ACL injuries. However, Dr. Ferrer stresses that it is not these elements as such that are conducive to this type of injury, but rather the stage of the menstrual cycle. “Neither of the two concepts involves risk as such. It is the hormones that, depending on the stage of the menstrual cycle, can increase the risk. During the pre-ovulatory phase, there is a rise in oestrogen and relaxin, the two hormones involved in increasing the laxity of the ligaments. This increased laxity weakens the ligament, reduces its tensile strength and therefore increases the risk of injury.” 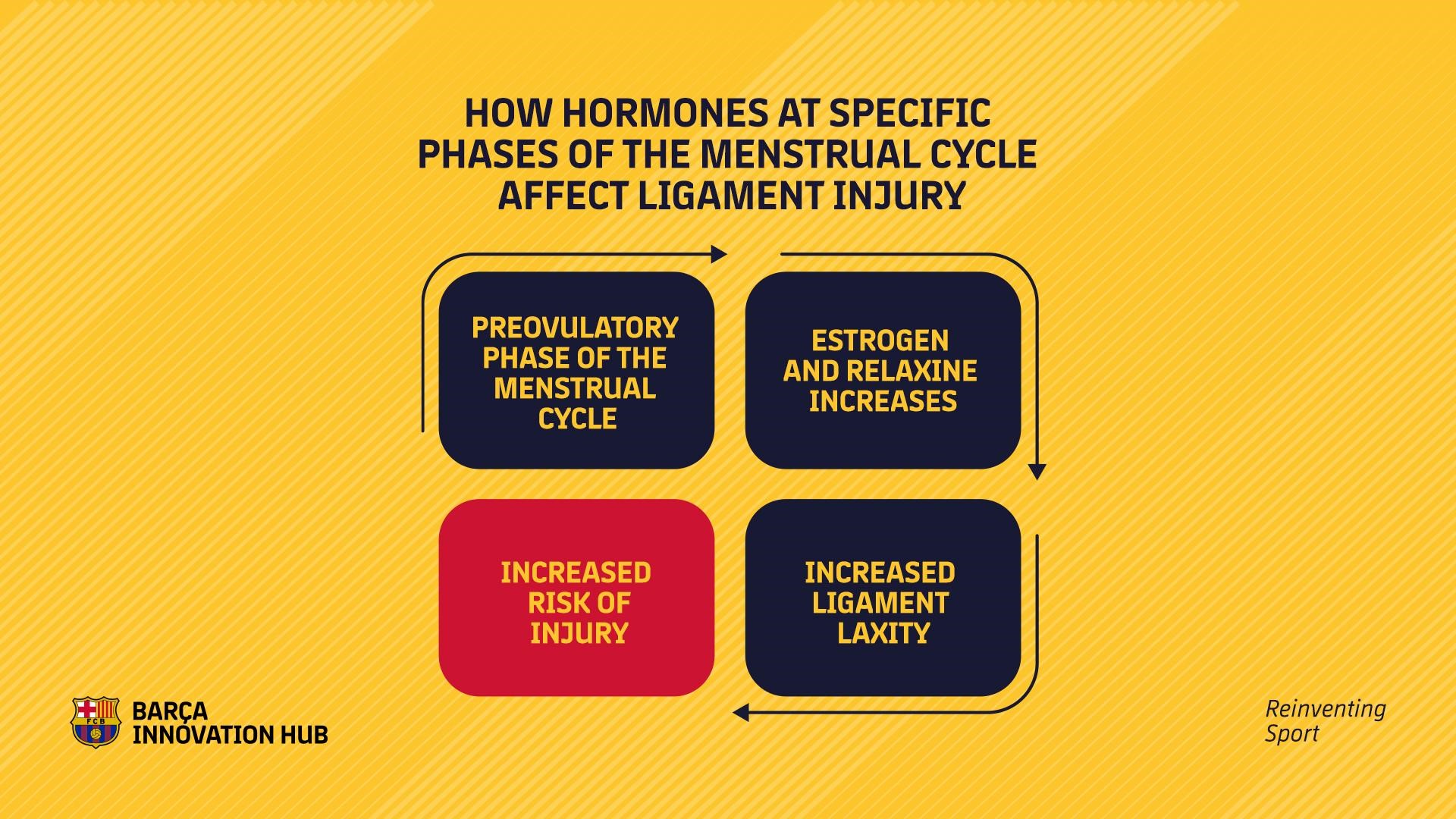 In order to take action on this type of injury, Dr. Ferrer stresses the importance of being aware of each player’s menstrual cycle. “According to existing publications, the greatest risk of ligament injury is detected in the pre-ovulatory phase. Clearly, what you need to do is to identify the exact stage of the menstrual cycle. If you don’t know where each player is at the moment, it is of little use to have it on paper. At Barça Innovation Hub and the club we are working to scientifically determine at what stage of the menstrual cycle the players may be in order to minimise these hormonal risk factors.”

Psychological management in the recovery process

Despite reported methods of prevention, ACL injuries are unpredictable and leave little room for action. 80% of this type of injury occurs in non-traumatic situations, that is, without colliding with anyone or getting hit. They are caused by the athlete herself, either by a bad move, a bad jump or a bad reception.

According to Dr. Ferrer, two aspects must be taken into consideration when this type of injury occurs. “On the one hand, there is the medical and physical preparation. You have to re-engage and motivate the player to get active from the start. Obviously, there are different phases, and the first ones are more passive, as you can’t do much after surgery, but once they are allowed to do physical activity, you have to encourage the player to do so. On the other hand, there is an individual and team variant that we experienced a lot last year. When two or three players get injured, it creates a state of panic in the team, the players start to think: What if it’s me next?”

The psychological factor plays a fundamental role in long-term injuries, both for the players who suffer them and for the team. The team needs to be as close as possible in order to overcome this panic. “It is important that the whole team comes together, both staff and players, to minimise this fear, because otherwise we would stop playing. The staff must be strong and convey the message that things are being done well and that they are working to protect and minimise risks and, on the psychological side, they must stress that there are three or four players who won’t be able to play and must be supported along the way. There will be ups and downs, as the process can last a year and the player will have to accept the fact that her teammates are doing what she cannot do, which is to train and play, so this support is fundamental.”

On an individual level, Dr. Ferrer stresses the importance of the return to training and the subsequent return to competition. “At this moment there is a great sense of fear, they ask themselves: What if it happens again? There is a risk of relapse – Bruna is an example of this – so we need to think about how to make sure that the player is not afraid to return to the field. This is a task for psychologists, but for the rest of the staff as well.

The potential risk of relapse is a fact in any recovery process and, for Dr. Yanguas, it is important to bring it to the table. “About 20-30% of surgeries performed on the anterior cruciate ligament rupture again within two years of returning to competition, whether it is the plasty or the ontralateral ligament.”

The fear of a possible relapse, however, is not the only concern that haunts the players during the recovery process. “There is another type of fear, not returning to the same condition as before. Studies in male athletes (unknown in female athletes) show that not everyone returns to their previous condition, but if the return to competition is rushed, the likelihood of returning to a similar level of performance as before the injury is lower. That is why it is important to respect recovery times because even though they may seem long, they are in the best interest of the player’s recovery.