In the NBA, the typology of a team project defines its circumstances and resources for facing a challenge. From a construction standpoint, we can identify three phases that range from player development until reaching high-level competitive ability at a group level.

The following are the principal determining factors concerning a competition like the Champions League (Table 1): 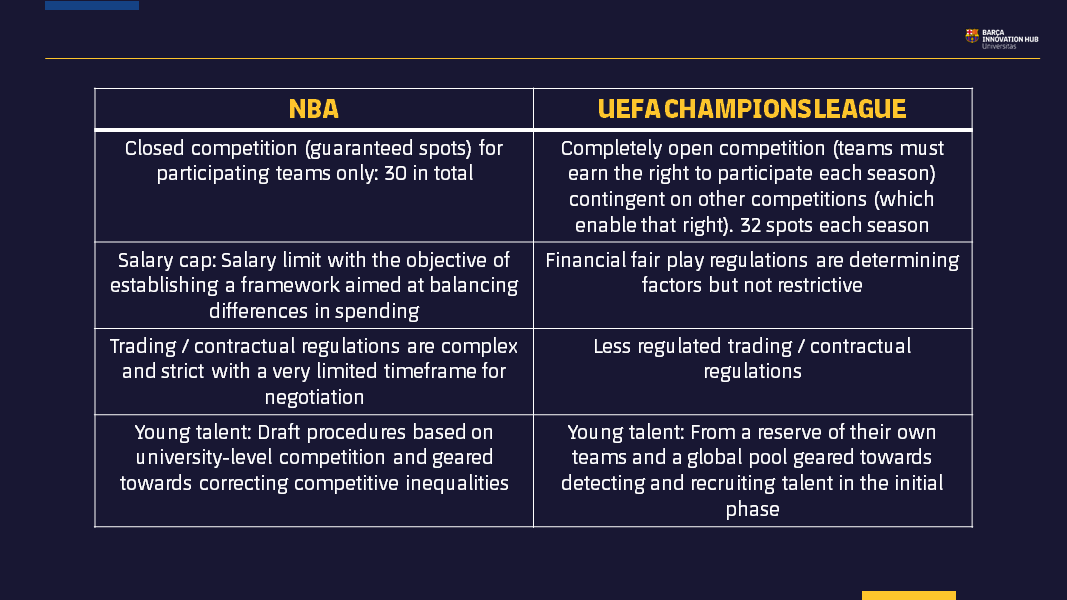 These determining factors require that an aspiring UEFA Champions League team maintain a high level of competitiveness in a sustainable manner. This need to compete at the highest level compels teams to constantly maintain a critical point and balance it – as we will see later – with incorporating and forming player roles in the creation and consolidation phase that could develop and eventually replace the top performers.

These are the three phases:

NBA: the initial project phase is based on the consolidation of mid- and long-term resources, which will later allow an organic development of structure. Therefore, the objective is to recruit talent to develop, with a high capacity for development in two main areas: physical terms (size: height, size, reach; mobility, power) and individual technique (passing, dribbling, shooting).

Scouting in simple terms > adaptation to the group structure

The group focus is adapted to the development of these profiles. For that, the use of high-speed systems, which require increased decision-making and readings of action/reaction, is going to strengthen the profile in the mid-term. Individual demands take precedence over the group in the first phase. It is a period of learning and growth.

UEFA Champions League setting:  this stage occurs frequently among reserve teams, or teams where players have been sent on loan. Since this phase concerns emerging talent, the analysis is aligned towards detecting the individual strengths of each player and trying to apply those strengths to the style of each team; that is to say, measuring the collective impact and, through analytics, monitoring development in terms of established objectives. This is always done with enough flexibility to detect individual opportunities as the process continues. Each competitive development implies a group challenge that entails an individual adaptation process.

NBA: The second point is reached when the profiles, still in development, have gained enough autonomy to display stable behavior during competition. This is the phase in which building the group structure begins, which will lay the foundation for future success. In other words, as this phase begins, it starts to produce a hierarchical effect within the system – according to roles and different cutting-edge designs that are now able to maximize the team’s potential.

This is where analytics becomes a primary factor for optimization. The process of accumulating, selecting, and analyzing data (both group and individual) contributes to building the design of a team.

UEFA Champions League: This stage is understood as the moment in which a player is able to contribute to the first level team: depending on each case, this can mean assigning the player to a role that may be more limited, but no less important. With the demands of the calendar, it is increasingly important that the players in rotation have enough versatility to perform at a high level in different positions when a more regular player is resting or is unavailable. There are other cases in which a player has a high maximum level within the group during the consolidation phase and they enter into a planning phase, where they gain prominence. To monitor this part in the world of football, we consider:

Abilities based on positional tracking:

Qualitative: qualitative contributions to enhance the analysis of the objective data derived from events and tracking. This part allows for categorization of abilities and metrics based on each team’s style and playing objectives

NBA: There is no specific window for moving from the second to third phase because organic development – especially for the positions of greater influence – may accelerate or slow that advancement. The final phase is defined by the primary interest: competing in the short term. The purposes are focused on maximum attention to group details.

Here, analytics reach their maximum level of influence – applying them first at an individual level (patterns, routines, and performance) to then apply at the group level (formats, compatibility, system variability). The organization is even more defined, and the structure is made stronger to allow roles to reach their highest level.

This is where the structure should showcase the talent. And not the other way around. It is the inversion of this concept that marks the critical point and the end of the competitive cycle.

UEFA Champions League: At this point, once the above-described analytical routine has been constructed, its development serves to generate new metrics that refine the model. Different objectives may be established, which measure and extend the critical point as much as possible with the previously mentioned rotation.