AN APP TO BECOME A FUTURE NBA STAR

SIGN UP FOR THE CERTIFICATE IN BASKETBALL TRAINING PROCESS OPTIMIZATION

One afternoon David Lee was practising basketball and his wife and daughter observed how he kept missing shot after shot. With his self-esteem wounded, he decided to make a video to show them that he wasn’t really that bad when practising alone. However, while watching the video, the computer engineer also started wondering whether he could analyse the recorded shots using artificial intelligence, and discover why sometimes he got it right and others not. This sparked the idea of creating HomeCourt, an incredibly well-developed app that the NBA has decided to use it for scouting future professionals.

It is extremely user-friendly. All you need is an iPhone or an iPad with the video camera switched on and place it on the midfield line. A tripod or selfie stick can be used to hold the phone, but a water bottle will do the job just as well. The important thing is for the player to record his practice shots because it is from these images that the application is able to generate personal statistics based on analytical metrics of the player’s game. First, it determines the type of shot made, and then it measures four-shot variables: release time, shooting angle, player speed and leg flexion angle.

This is how HomeCourt shows your data

The choice of these variables is not coincidental. The faster the player fires a shot to the basket from the moment he receives the ball, the lower the chance of being blocked. The player’s shooting angle will determine the arc of his shot: the higher the arc, the higher the rating when the ball lands in the hoop. The speed at which the player moves is also recorded, as is the angle of the player’s legs: the less knee flexion there is, the more stable the player’s position will be for guiding the ball. The metrics for each of these factors are recorded individually for each shot, generating an average for that specific training session and an overall average for the previous sessions. This way, the player is able to consult and analyse his game progress. But it is also possible to zoom in on individual moves or plays in slow-motion. The player can also share this data with their coach or trainer, as well as with the rest of the team. 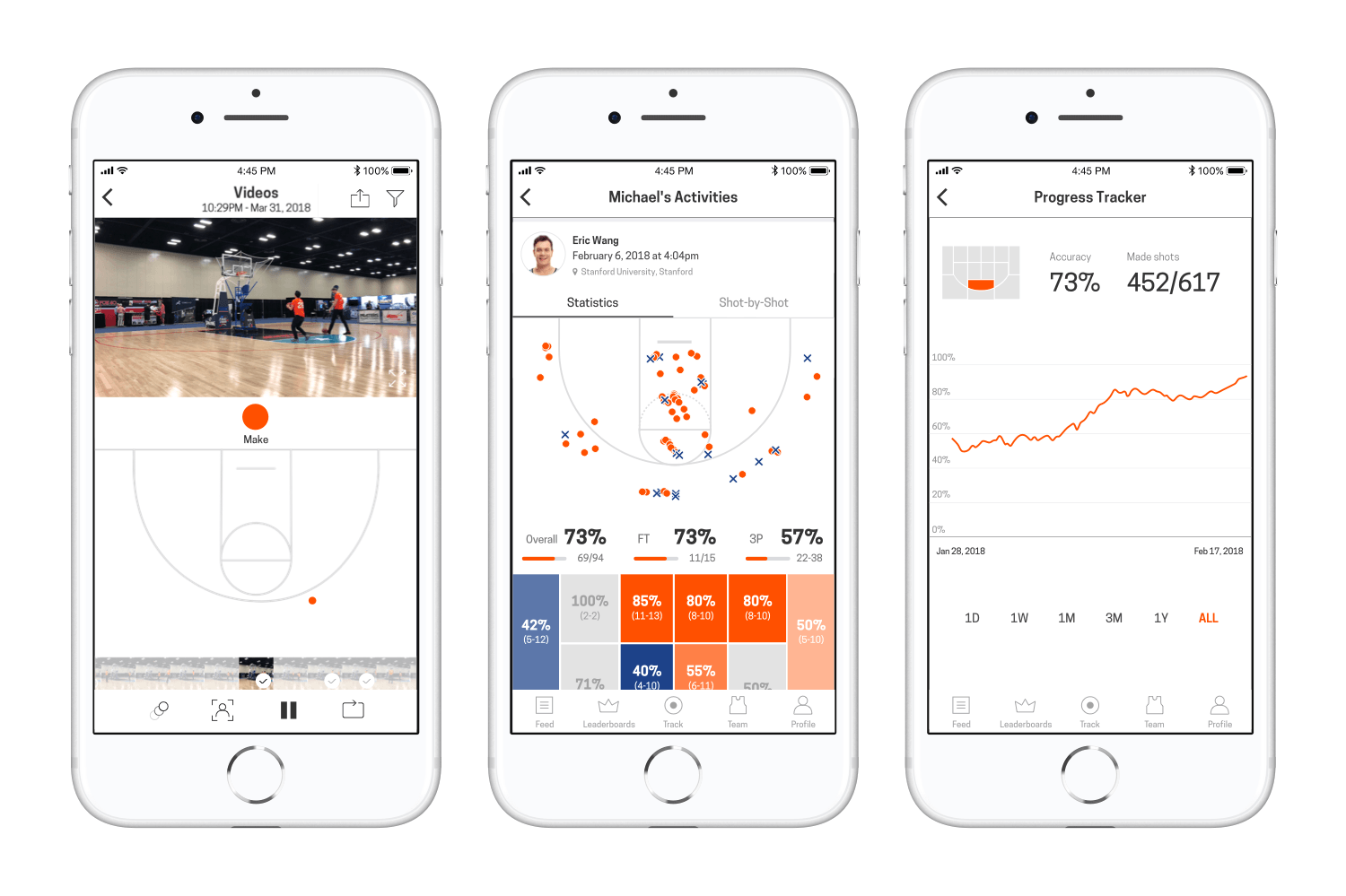 As asserted by David Lee himself, HomeCourt is based on the ‘science of shooting’. This theme started a decade ago, thanks to the work of aerospace engineer Larry M. Silverberg. A big fan of basketball, he wanted to apply his scientific specialisation to this sport. He did so by studying thousands of 3D simulations that recreated real game situations and concluded that there were several variables for determining the success of a shot getting into the basket. As published in the paper, “Optimal release conditions for the free throw in men’s basketball”, these variables are the same as those analysed by this app.

The app has added to this scientific base, a mixed technology which combines artificial intelligence and augmented reality (AR), which its application to sports performance has been discussed previously. Through AR, HomeCourt exploits the ability of smart devices to recognise objects. It then adds a function that can identify two dominant objects in an image, the ball and the player, and excludes everything else. The role of artificial intelligence is to take these images and accumulate information about them in a neural network, which enables the algorithm to learn. Right now, having added 10 million shots originating from the 150 countries in which the app is used, the metrics used have become incredibly accurate.

So far, we have only talked about the advantages of the app. However, one of the main limitations for users is that it is only designed for Apple devices. According to David Lee, an Android version is not possible because its system currently cannot process HomeCourt’s artificial intelligence algorithms at the needed speed. Even once we have overcome this hurdle and have an iPhone 6 or one of the latest generation iPads, we still face problems with the courts. The field must have clear lines and an unobstructed vision. In other words, classic urban courts within “cages” can prevent the app from correctly detecting the player and the ball. Another important issue is that the ball must be as close to an official one as possible, particularly in terms of its orange colour.

With respect to increasing privacy concerns, even the paid version of the app uses the users’ videos in order to continue enriching the accuracy of the metrics. The company, therefore, uses each player’s videos, although it doesn’t relate them to their personal data. For users to protect themselves, they can choose whether their profile is made public or kept private, and can approve or reject followers. However, given that one of the uses of this app is to attract the attention of NBA talent scouts, sharing is practically compulsory for the aspiring professional.

The analytic capabilities of this application caught the attention of Steve Nash, the best free-throw shooter in the NBA’s history. Now retired, his success percentage was 90%, much higher than the average of most professional players, which usually ranges between 70 and 75%. Nash was one of the main investors in the initial funding round of the app, which received 4 million dollars. He became involved because he felt that the app showed that a formidable player like him did not just come about by chance: such a player can be created by analysing their game and correcting their mistakes.

NBA executive Sam Hinkie, who believes that HomeCourt offers a long-sought-after solution to two problems in basketball, also played a fundamental role in the app’s development. The first problem was the cost of creating a great player, for which the eye of the coach is essential, using a pencil and paper, or complex sensors. This is something that not all amateurs can afford. And the second problem was the ability of the big leagues to identify the most promising young players. If a player decides to share his metrics through the app and this data is particularly outstanding, it will attract the attention of NBA managers who, thanks to an agreement between the developer and the league, now have this app as yet another scouting tool.

It is possible, however, the key to HomeCourt’s success goes unnoticed. And this is because its development and unique characteristics reflect a fundamental reality in today’s sporting world: the essential bond between enthusiasts, technology developers and sports professionals. Only multidisciplinary teams sharing common objectives are making progress. The development of HomeCourt could not have taken place without the joint collaboration of computer engineers such as David Lee, enthusiasts who have enriched the neural network with their game, and NBA League players and executives. Is this the future of sports? No, this is happening right now.