A step forward in the classification of muscle injuries

Muscle injuries are one of the main concerns in sports performance. This kind of injury entails around 30% of total injuries in elite football, the most common being hamstrings (23%) and the quadriceps (19%) (Ekstrand, Hägglund, & Waldén, 2011). It is estimated that in a team of 25 players there are around 15 muscle injuries per season, this being the cause of 27% of absences due to injury (Ekstrand et al., 2011). Therefore, muscle injuries have significant negative consequences both for the player himself and for the team.

Adequate diagnosis and accurate classification of muscle injuries is a fundamental process to facilitate their prevention and treatment. However, there is a lot of controversy about how these types of injuries should be classified. Although different authors have proposed different terms to classify muscle injuries based on their location – differentiating, for example, between intramuscular, myofascial, musculotendinous, or intratendinous injuries – (Chan, Del Buono, Best, & Maffulli, 2012; Pollock, James, Lee, & Chakraverty, 2014). These classifications still present some limitations.

This disagreement regarding the classification of injuries could be due to several causes: “the first one due to a lack of knowledge about the anatomy and histology of the muscle injury: if we do not know what there is, we can hardly describe it. The second one, to the existence of different classifications based on different origins and using different diagnostic tests (clinical, ultrasound or magnetic resonance imaging, for example), which causes jargon confusion. The third one, is the language: currently, English is the common language in medicine and the translation that we make of many of its words does not have an exact translation in our language”, says Dr. Ramón Balius, specialist in Sports Medicine and member of the study group of the Spanish Society of Sports Traumatology (SETRADE).

In a recent article led by doctors and researchers from SETRADE – including members of FC Barcelona medical services – an updated terminology has been proposed that, in addition to considering the topographic location of the injury, it takes into account its histoarchitectural characteristics (i.e., damage to connective tissue structures) (Balius et al., 2020). As Dr. Balius, lead author of the study comments: “I think this article organises concepts and, especially, limits them at the histomorphological level, which is where they really originate. Especially the concepts “myotendinous” and “myofascial” have always been misunderstood and confused with each other. I think the concept “myoconnective” is also interesting in order to comprehend all types of muscle injury.”

In this review, the authors argue that all muscle injuries take place in myoconnective junctions, but that they can be separated into myotendinous or myofascial. A first classification would be to divide those injuries that take place in the myotendinous junction (injuries that affect the aponeurosis or tendon expansion attached to the muscle fibres) or in the myofascial junction (when the injury occurs in the muscle fibre and in the perimysium or epimysium, that is, in the fibrous collagen layer that surrounds the fascicles of muscle fibres or the whole muscle).

Injuries which involve the myoconnective, can settle on the periphery of the muscle or inside it. Peripheral injuries mainly affect the myotendinous junction (that is, the aponeuroses), which occur for example with the common hamstring tendon, the posterior rectus femoris aponeurosis, or to the medial head of the gastrocnemius. Nevertheless, other structures near the myotendinous junction belonging to the perimysium or the epimysium may also be affected, being then called “myofascial”, and that’s a consequence of traction from a proximal aponeurosis. On the other hand, central injuries of the myoconnective junction would be those that affect the central tendon and are characterised by not being surrounded by the epimysium, as it occurs, for example, in injuries of the rectus femoris tendon or the central soleus tendon.

Summarised in Table 1, the authors propose that in addition to this classification of injuries based on their histomorphological location, the degree of damage to connective tissue structures must be considered. For example, injuries affecting the tendon up to aponeurotic tissue, these are called “tendon injuries” and are shown as a gap, but this gap can be in a transversal, longitudinal, or mixed orientation. Depending on this factor (specifically, if it happens transversely), a retraction of muscle fibres and a greater fibrous repair will occur, and there will be a greater probability for a relapse. Furthermore, when the tendon or aponeurosis is undamaged and the damage occurs at the junction of the muscle fibre, they are called “myotendinous injuries”. These can be expressed locally, affecting a few muscle fibres, or in the form of a large tear with heavy bleeding sometimes. Finally, when the injury occurs as a result of traction by the tendon or aponeurosis on the perimysium and muscle fibres, it is called “intramuscular injury” and it has a better prognosis. On the other hand, there are injuries that occur in the myofascial junction at a peripheral level and that may or may not damage the epimysium, spreading the oedema through the different intramuscular planes in the event of damage (but not if it remains intact). 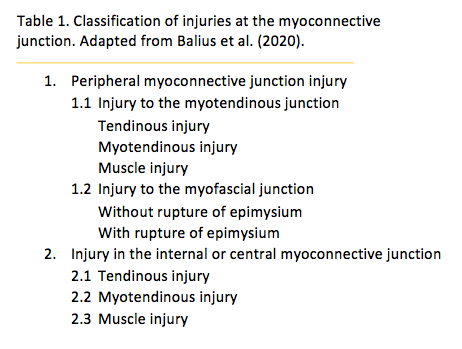 To summarize, the authors propose the following terminology (which must be followed by clinical observations such as the presence of haematoma or not) to identify the injuries:

This is a consensus article that tries to facilitate the use of a common and, above all, precise terminology, (using both the location and the level of damage produced at a histoarchitectonic level) to refer to muscle injuries, thus improving their prevention, diagnosis and management. As Dr. Baliu comments, “We hope that the nomenclature will serve to classify all the injuries of the different muscle groups, and we also believe that this nomenclature is useful because it implies giving a prognosis to the injuries once they have been analysed and catalogued. In short, a useful nomenclature is one that, apart from describing the injury, translates a prognosis and its risk of re-injury”.