Despite the growing interest in Paralympic sports, research into performance in elite wheelchair sports has seen very little development. Two of these sports are wheelchair basketball and wheelchair rugby, both played on a basketball court. Most existing studies have been carried out for wheelchair basketball, but there is still no simple and reliable indicator of the physical condition of any wheelchair athletes that would allow for their evaluation and would enable them to follow a variety of training programs safely and comfortably.

A group of researchers, including Adrián García Fresneda, a professor at the Mataró TecnoCampus and a physical trainer for Spain’s national wheelchair rugby team, and Gerard Carmona, a researcher in FC Barcelona’s Performance Area, has recently demonstrated the reliability of the “push-start” as an indicator of athletes’ physical condition and its relation to sprint capability. Their results can also be applied to wheelchair basketball and are published in The Journal of Strength & Conditioning Research magazine. 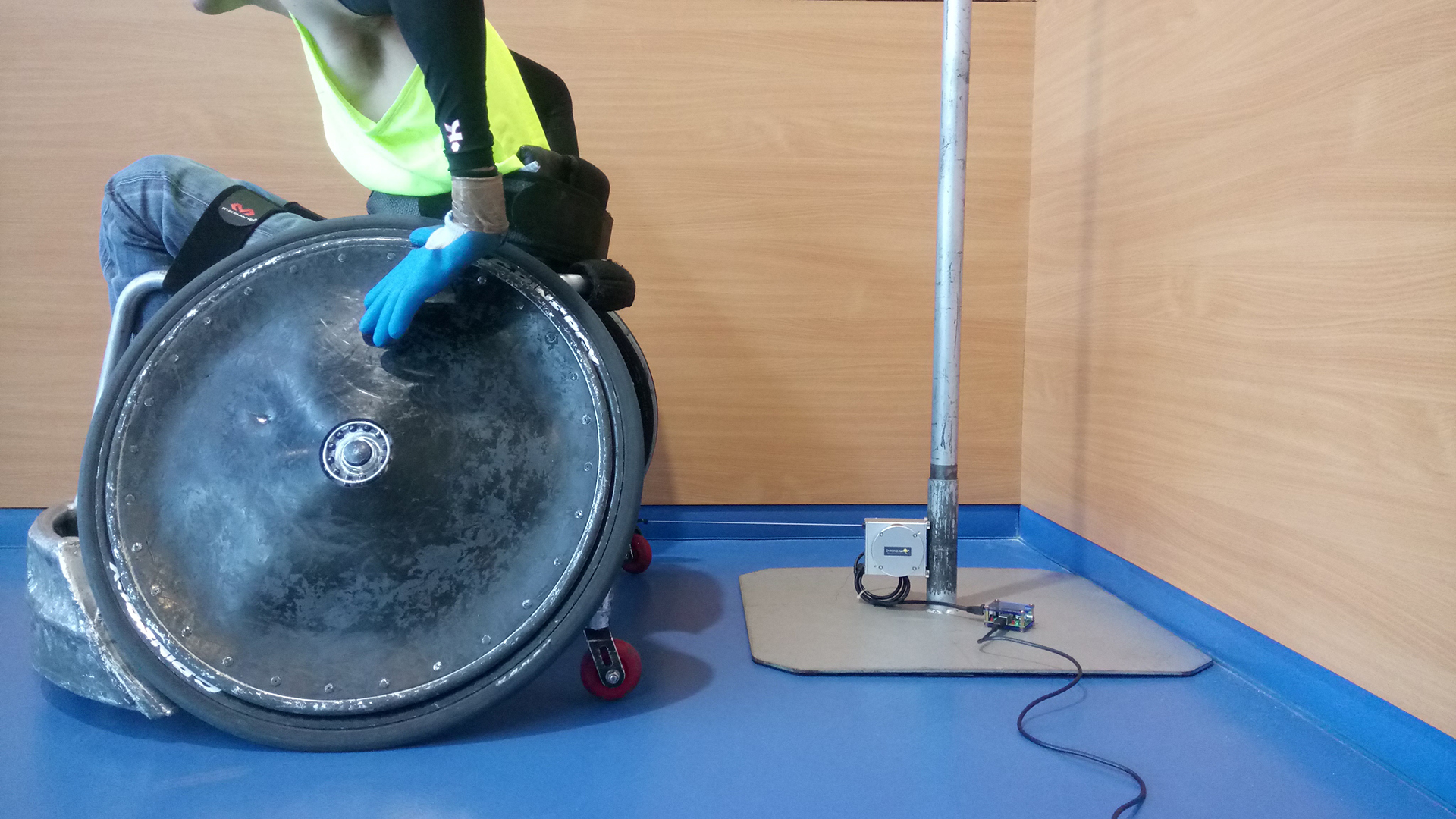 “Until now, we didn’t have a field test that allowed us to evaluate training,” comments García Fresneda. “We used lab tests, but these take a lot of time to carry out, and also the results are not direct but have to be extrapolated.” What the authors were looking for was the wheelchair equivalent of the well-known Bosco test, which evaluates the characteristics and capabilities of muscle fibers in the legs through the use of vertical jumps.

The working hypothesis was that both the “push-start” or “first push” (IMPRP: Initial Maximum Push-Rim Propulsion) and the 12-meter sprint capability, could serve as indicators of the physical condition of athletes. The 12-meter sprint capability test had been studied in basketball players, but the reliability of the test had not yet been determined. To do so, they studied 16 wheelchair rugby players who were subjected to two types of tests. On the one hand, the mechanical parameters of the push-start were studied using an encoder, a sort of rope that continually measures velocity, force, and the power exerted. On the other hand, sprint capability at 3, 5, and 12 meters was studied using a radar. The variability between repetitions was calculated in order to study the reliability of each test, and the correlation between the initial push-off and the sprint was investigated, on the logical assumption that one would depend largely on the other.

Variability measurements were consistently low, which suggests that it is a reliable test and that for each repetition, the values obtained are qualitatively similar. Furthermore, the first push accounted for between 60% and 80% of sprint capability, especially at 3 and 5 meters, “which are the distances that are repeated most often during the game,” underlines García Fresneda. 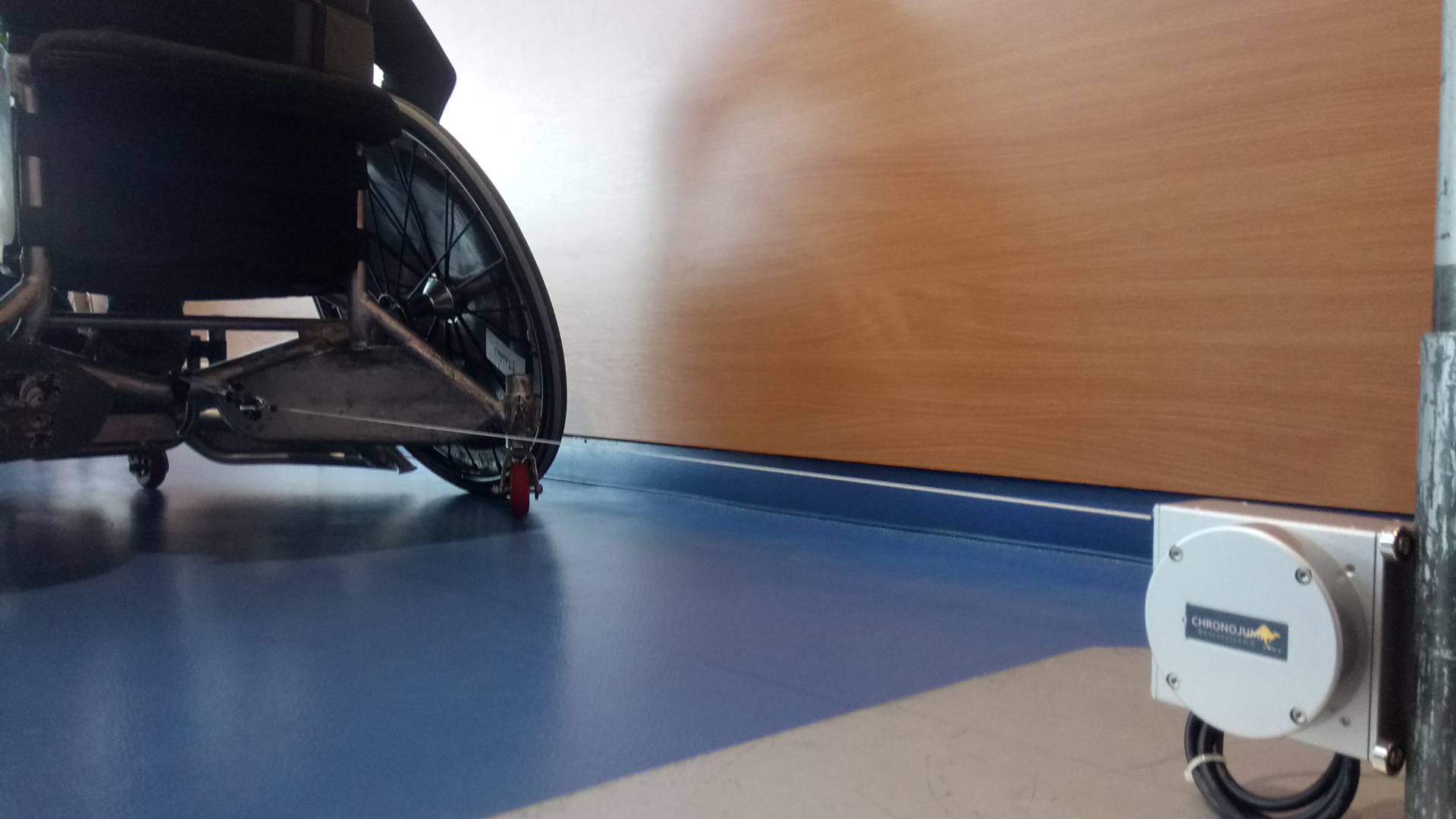 “The study is important because we can use it as an indicator of mechanical performance during push-off, which is the basic motor pattern for movement. It is a simple, reliable and specific test that allows us to monitor the athlete’s performance,” assures Carmona. “We are already using it to verify our training hypotheses,” noted García. It could also be used to identify the most effective programs, bearing in mind that it is not yet known exactly which muscle groups participate in the initial push-off and that these may vary depending on posture and degree of disability.

The results can also be fully extrapolated to basketball, since “both sports are played on the same court and both require accelerations of the greatest possible magnitude,” explains Carmona. “As far as we know, until this study, there had been no testing of these characteristics in the context of wheelchair sports,” he says.

COVID-19 WILL ACCELERATE A REFORM IN THE WORLD OF FOOTBALL

There are two clear lessons we have learned from the pandemic: empty stadiums also empty football’s spirit, and leagues cannot be played in a normal condition if there is a permanent threat of disease.

ÁNGEL CAPPA, THE COACH AT THE CENTRE OF FOOTBALL

Cappa’s fundamental premise is to approach football without fear. You cannot coach a team ruled by fear of its rivals.

PLAYER MIGRATION AND THE PERFORMANCE OF ELITE FOOTBALL TEAMS

Globalization –the process driven by the increase in cross-border flows of goods, services, money, people, information and culture1- has dramatically affected western societies and football is not isolated from this phenomenon.

Science has changed training in team sports by modifying many routines and preparations. The quantification of everything which takes place in a training session is one of the goals for the staff.

In recent years, two training paradigms have revolutionised the way we understand preparation in team sports.

Having all players healthy and ready for competition is one of the main training objectives in top-level football.

KINEMATIC DEMANDS IN FIELD HOCKEY. HOW DO PLAYERS MOVE DURING A MATCH?

The introduction of the Global Positioning System (GPS) technology into the world of sports enables us to gain specific information about the speeds reached or distances travelled during training and competition.

PRE-SEASON DESIGN: THE INFLUENCE OF INITIAL RESULTS ON A TEAM’S FINAL RANKING

One of the first decisions a club’s coaching staff must take is the design of pre-season training.

PRE-SEASON. GETTING READY TO SHAPE THE PHYSICAL FITNESS OF PLAYERS

The objective of the pre-season is to seek the best individual and collective physical fitness of the team before beginning the competition.

SMALL-SIDED GAMES IN FOOTBALL. ARE ADAPTATIONS THE SAME FOR PROFESSIONAL PLAYERS AND AMATEURS?

THE USE OF WELLNESS QUESTIONNAIRES IN FOOTBALL

Training load (TL) management is a key component for optimising performance. Understanding TL will allow us to evaluate fatigue and to anticipate overload and overtraining in order to minimise injury risk.

APPLYING THE PRINCIPLES OF JOHAN CRUYFF TO DATA SCIENCE

With such an ambitious goal, the Barça Innovation Hub has presented its research at this year’s world-renowned MIT Sloan Sports Analytics international conference.

EVALUATION OF THE INTERNAL LOAD IN FOOTBALL: FROM THEORY TO PRACTICE

The development of elite sports has meant that players are constantly exposed to higher training loads, busier competition schedules and shorter rest periods.

MAXIMUM DEMAND SCENARIOS IN POSITIONAL PLAY: ARE THEY EQUALLY REPLICATED ACROSS ALL POSITIONS?

Players’ conditional response during competition, for example, distance covered at a run, has traditionally been described using the average value covered during a half or full game.

THE INFLUENCE OF THE PERCEIVED EXERTION RATING ON FOOTBALL TRAINING AND COMPETITION.

Monitoring training load is one of the fundamental tools for optimising the performance of both elite athletes in general and football players in particular.

HOW DO THE NUMEROUS CONSTRAINTS AFFECTING ATHLETIC PERFORMANCE RELATE TO ONE ANOTHER?

We know that athletic performance is a complex phenomenon that depends on numerous constraints, but do we know how these constraints relate to and interact with each other?

The ability to sprint is essential in the majority of team sports, including rugby, soccer, and basketball. But this ability is not developed in stable and controlled conditions: players are constantly subjected to variable demands, whether receiving, carrying, passing, hitting, or throwing the ball.

ARE SMALL-SIDED GAMES THE SOLUTION TO ALL OUR PROBLEMS?

One of today’s most attention-grabbing topics among sports researchers, coaches and managers have to do with the study of maximal demand scenarios, also known as “worst case scenarios”.

Those who have watched elite football across the last decade, realise that the game is more demanding than ever. This places more emphasis on training methods to prepare players for the rigors of the game.

WHICH VARIABLES DO WE TRAINERS LOOK AT TO HELP US MAKE DECISIONS?

Of all the variables provided by the systems that monitor and record our players’ activity, what is the most relevant information? This is a question that all coaches will probably face when they begin managing the large volumes of data generated in every training session.

For the first time, our new research may provide some insight into the training methodology and, potentially, the secrets of the club’s success. These “secrets” could be closely associated with the theories put forward by coach Paco Seirul·lo and how they link with cutting edge sports science.

HOW PHYSICAL DEMANDS ON FOOTBALL PLAYERS VARY BY THEIR POSITION

Although there are several studies on this topic, many of them have analyzed these demands by looking at just a few variables or using very broad timeframes. A new study completed by physical trainers from F.C. Barcelona has analyzed several of these details more closely.

Degrees of freedom or degrees of slavery?

The understanding of the modifying variables of the game, based on the degrees of freedom.

The goal of this post is to outline a series of principles that are considered to be crucial to understand the development of FC Barcelona’s playing style.

Training using eccentric exercises is important to prevent possible damage. However, intensive training can also cause muscle damage, so it is critical to be vigilant in order to keep injury risk to an absolute minimum.