Football knowledge has been transmitted for years through scouts, reports and videos. Now, a new data analysis era has arrived: with deep, thorough and verified information. But as the Head of Sports Analytics at F.C. Barcelona, Javier Fernandez explains, it still exhibits difficulties to gather, process and interpret this data.

The Barça Innovation Hub has followed this new discipline since its blooming. Many of the talents that took part in the first encounters organized by the Hub, are currently involved among the most important projects in the sports data world. Some of them participated in this new edition of the Barça Sports Analytics Summit and presented their latest research.

The head of information and data systems at Benfica’s, Suds Gopaladesika, explained in his paper “How to strengthen a club´s culture through data analytics,” how the Portuguese club works on its ambitious goal to optimize its players’ sprints. Gopaladesika starts from the premise that a race at top speed implies that the player will not be able to do another one under the same conditions for at least 15 minutes. Taking into account that the majority of attack sprints lead nowhere as the move is not successful, he has tried to measure through data analysis which players have the best average of high-quality passes, and which have the best average of receiving them. All this is done in an attempt to facilitate a good feedback for the coach so that players can use sprints in moments in which they are more likely to become a threat to their opponent. 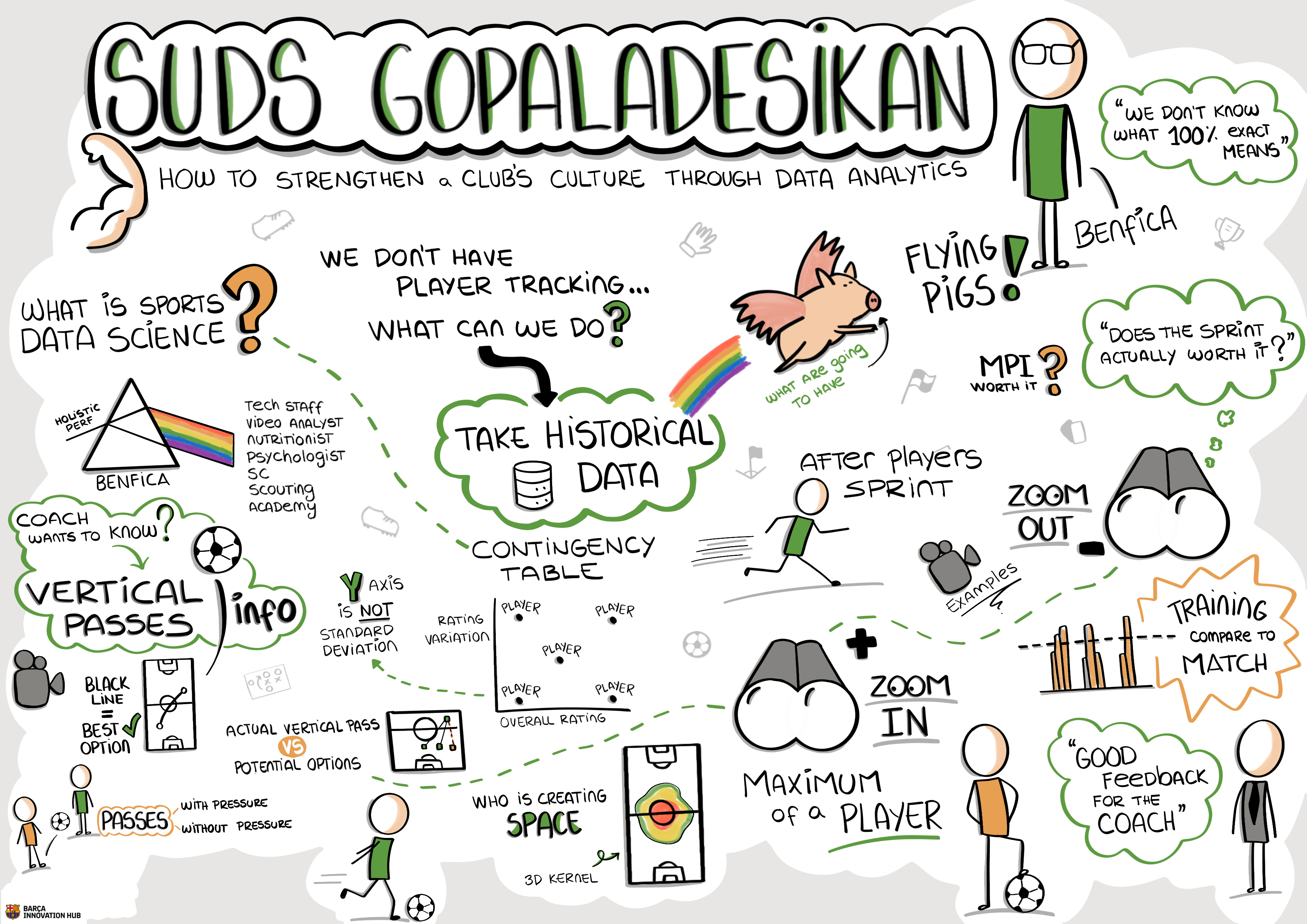 Scientist Bart Spencer, from the Australian Victoria University, presented in his work “Using contextual player movement and spatial control to analyse player passing trends in football,” where he describes how the movements of the ball can be mapped in a team. Thanks to the data collection at the American MLS league regarding the useful moves players do to get a pass, deliver a successful pass, the areas where it takes place and the level of risk they represent, he has been able to determine the channels through which a ball moves among team players. In the future, this system could enable players to increase the quality of spaces generated by plays, and provide the player with feedback for decision-making at the time he has to touch the ball.

The probability of getting injured

Injuries cost an average of 188 million euros each year in the first and second division in Spain, and the average rate of lost matches is 16%. However, data processing can provide coaches with valuable information to take into account the chances a player has to suffer an injury due to an accumulation of minutes and performance. Luca Pappalardo, member of ISTI (Institute of Information, Science and Technologies) at the Italian CNR, has explained through his work “Explainable Injury Forecasting via multivariate time series and convolutional neural networks,” how he has been able to improve the injury forecasting system MATH (Memoried, Accurate, Transparent, Holistic). Through this system he has reduced the rate of false alarms from 96% to 45%, thanks to the use of artificial intelligence (MTS-CNN, Convultional Neural Network). This is a new path that could also help create specific training plans to avoid injuries in the future. 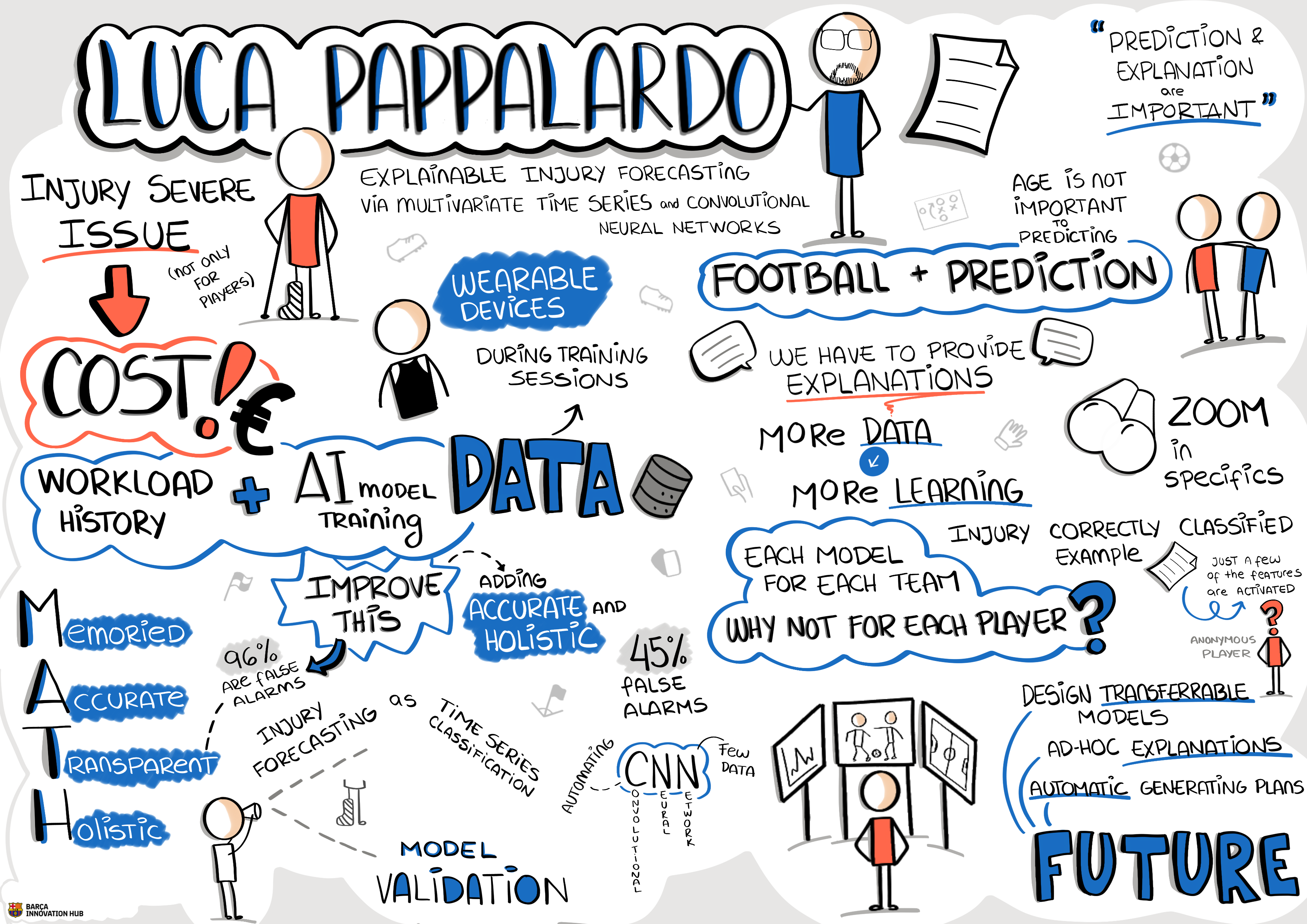 Breaking through the opponent’s lines

Johan Cruyff’s philosophy is very clear. The player who leads the ball is as important as the one who creates the space so that the player who is alone, gets the ball. With this idea in mind, Sergio Llana, FC Barcelona’s data scientist, explained in “How and why we need context to analyse ball possessions,” how the monitoring of Barça’s game is carried out to provide the technical staff with uncluttered information. Llana explained how they divide the game into three stages, the initiation phase, the progression phase and the completion phase. Inside each of them, they set small objectives which are those moves without a ball which allow overcoming the opponent with a play. By tracking the game and screening data as mentioned, it is possible to know the patterns in which players create these “windows” that enable these kinds of plays to be completed. 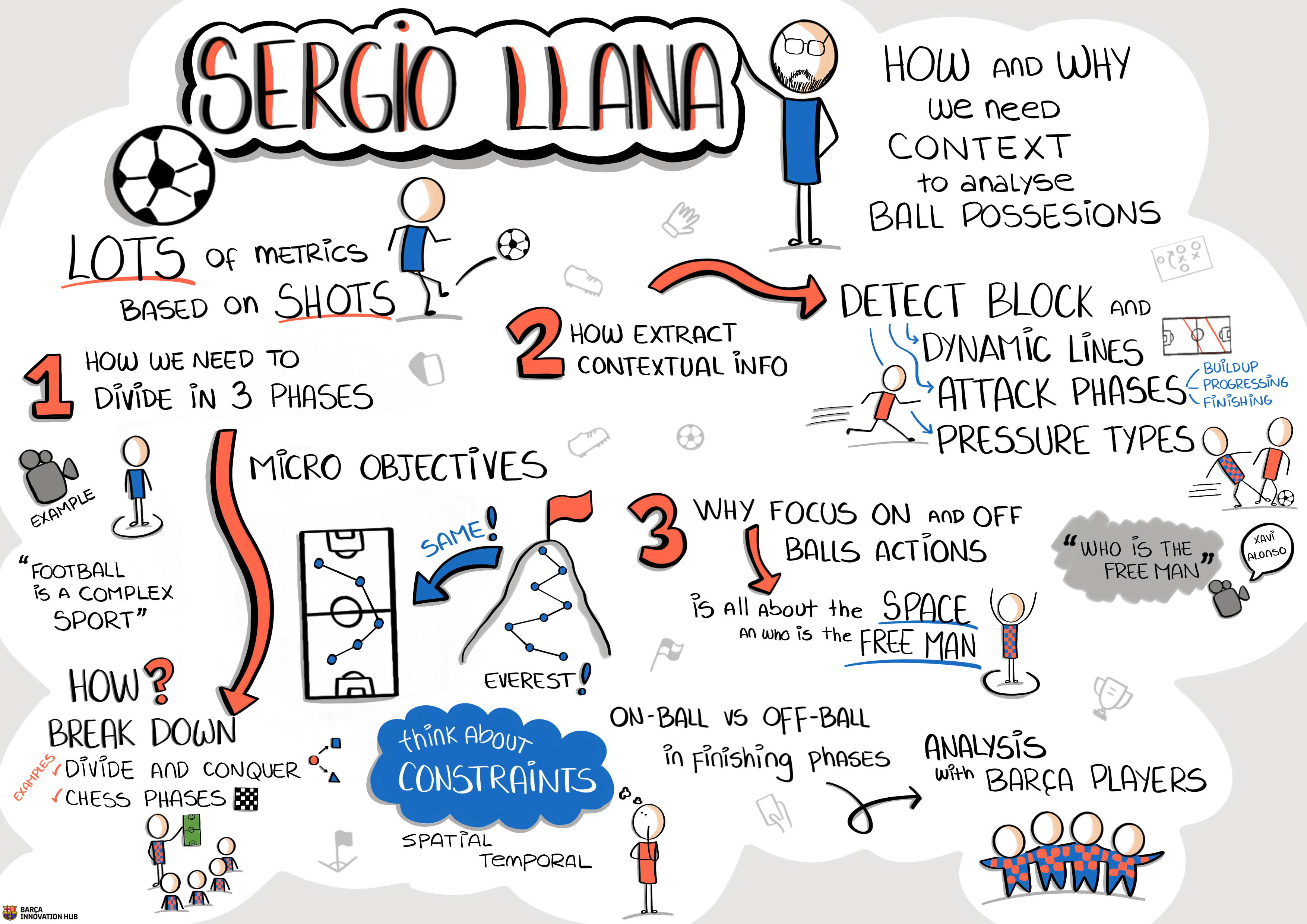 For clubs who have a low budget, Jacob Mortensen, from the Simon Fraiser University, announced in “Estimation of player load metrics using broadcast derived tracking data,” that the speed and distance a player goes through can be measured using the shooting distance from a camera during the broadcasting of a match. Through this calculation, it can be determined the position and movement performed by the players who are out of focus. This is a system that could be used in the future to help improve the precision of the data obtained from low-quality videos. 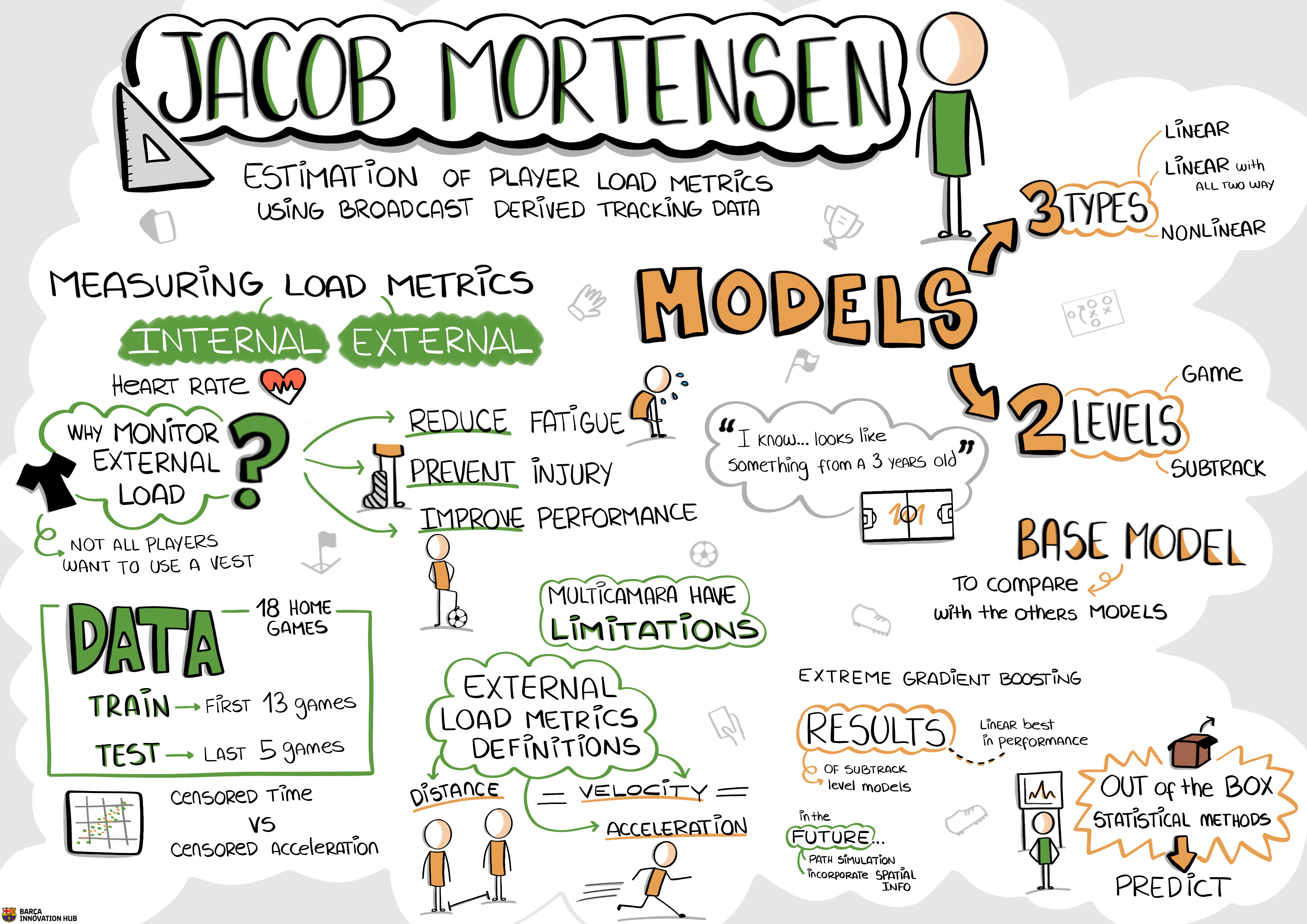 Many moves in a match do not come to fruition simply because a player does not know where his team-mates are. A correct body orientation to follow the game as well as receiving the ball is key to identify the position of the other players. Adrià Arbúes, from Universitat Pompeu Fabra, explained his new model of computerized vision to track the position of the player’s body during the game in “Head, shoulders, hip and ball… Hip and ball! Using pose data to leverage football player orientation,” a project that is still in progress. Knowing all of this information is useful to measure the response time, to train techniques using the visual field of the player as a factor, and to train youth teams. His measuring system is based on the field’s perspective, the position of the ball and the position of the shoulders, hips and the player’s face. Even though video quality produces errors when measuring, Arbúes assures that information can be collected in 24 hours.

Adding more to the player’s profile

Jan Van Haaren, from the University of Leuven, Belgium, showed in “Scouting football players by squeezing every last drop out of match event data,” the opportunities there are to expand a player’s report. In the first place, he advocated for quality data using the following example: If a football player passes the ball to a forward who is two meters away, and this player dribbles many rivals and scores a goal, then the pass is an assistance, but it cannot be compared to a 40m assistance which leaves a forward alone. Data processing must take into account these variables to determine the quality of the athlete’s actions. What is more, Van Haaren also measured how football players reacted to pressure thanks to a system that measures variables such as prolonged periods of not winning matches, the proximity of derbies, the dismissal of a coach or being in the lower-ranking positions. 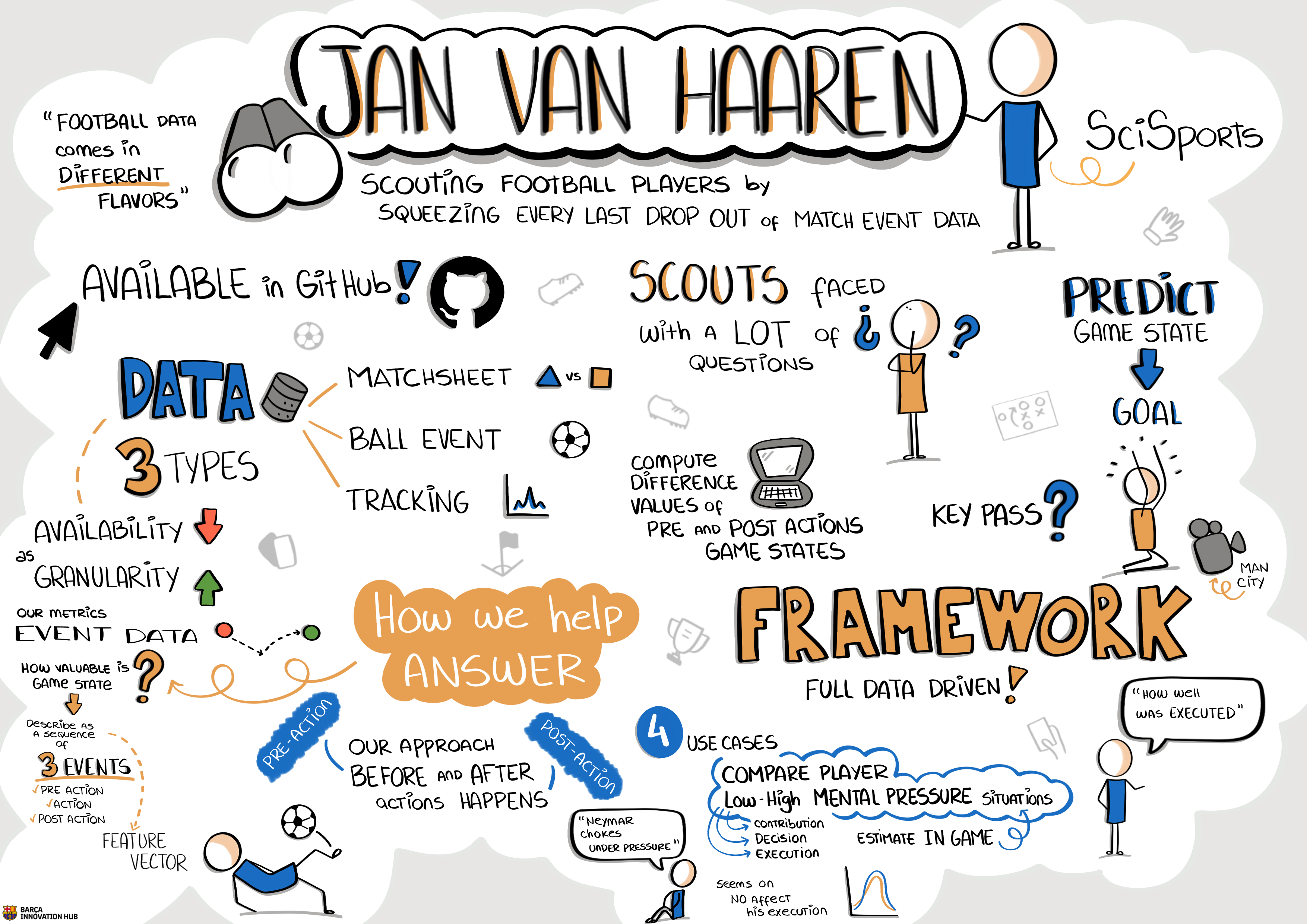 The effectiveness of each tactic

The award-winning paper of the Barça Sports Analytics Summit was for: “Dynamic Analysis of team strategy in professional football matches” written by Laurie Shaw, researcher at Harvard University. Through the data obtained by tracking, he has studied the opportunities created by employing the football tactics in a team’s field. The research includes the change of strategies that take place during the match and the transitions from an attacking phase to a defensive phase. The processing of all this information opens the door to knowing the probability of creating opportunities and bringing them to life with each scheme or line-up, as well as the risks of conceding a goal with each of them. 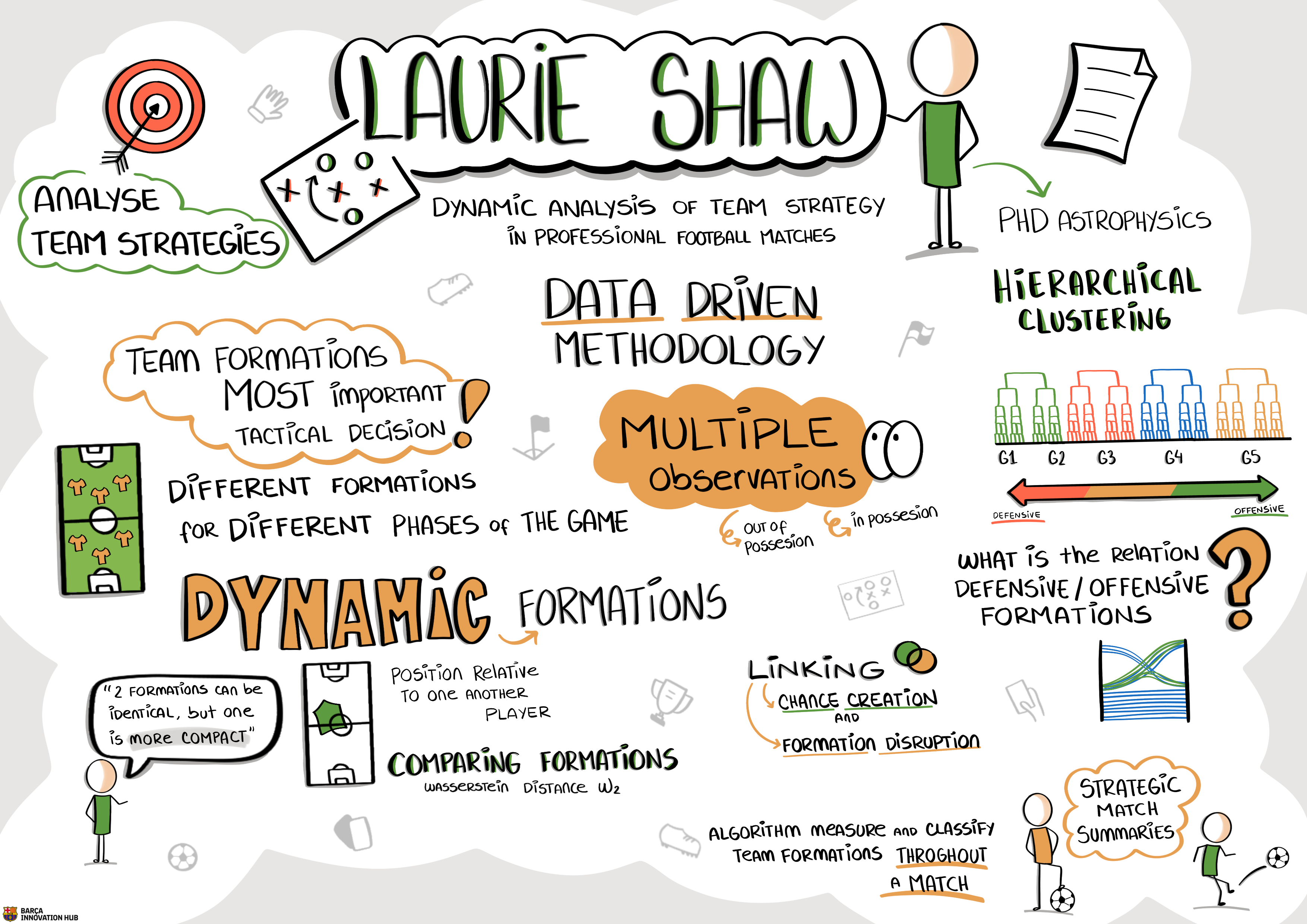 As a special guest, Dan Cervone, head of Quantitative Analysis at the Dodger’s, an American baseball team, showed in “Baseball analytics in the age of tracking data,” how these strategies are employed in this sport. Baseball is a discipline tightly connected to data and statistics since its beginnings. One of the most relevant functions of assessing an athlete’s effectiveness takes place when being hired by a team, as cheaper additions of players with similar effectiveness rates can be found. In his club, now they are using data to determine the level of difficulty for the defence of each batter and that of the pitchers. However, he confessed that it has been a hard work to get the coaches to pay attention to the statistics that they’ve been given and that they make choices based on these statistics. 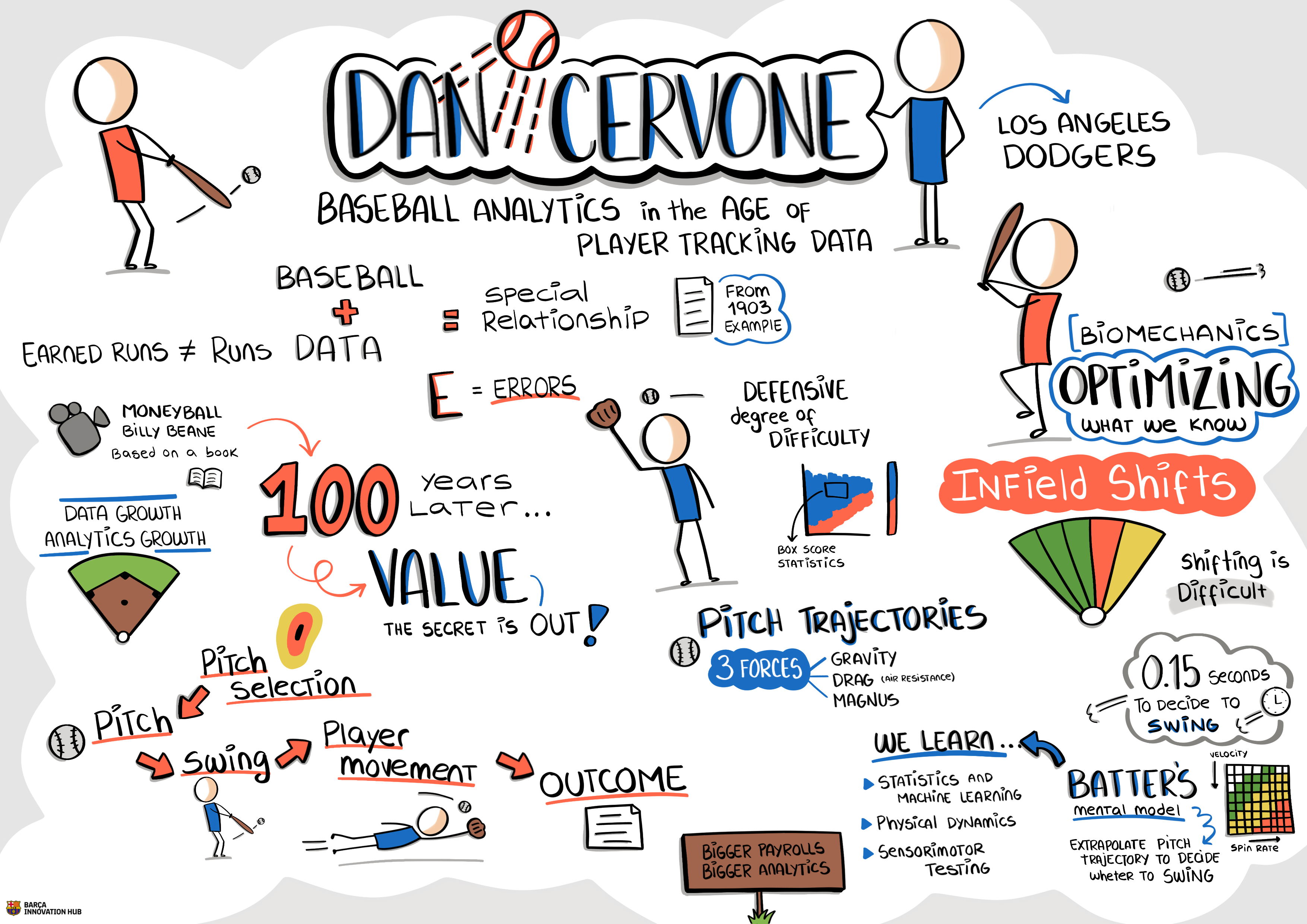 Lastly, the difficulty for data scientists to communicate with coaches and team leaders has been discussed in a roundtable format. Van Haarven explained that the key is the questions posed to the scientists, as their work is oriented towards answering those questions or presenting relevant data for decision-making. Gopaladesikan claimed that the coaching staff are used to working with videos and that it is important that data scientists who are presenting a new language or a new communication model, can have a mutual understanding with the coach without too complex graphs. When asked about why attack methods were more analyzed than defensive ones, all of them agreed in answering that the attack depends on oneself while the defensive tactics depend upon the opponent, and that is why it is unpredictable. In this respect, Sergio Llana said that the attack is more appealing than the defence, but pressure models which are being developed more in-depth have to be taken into account. 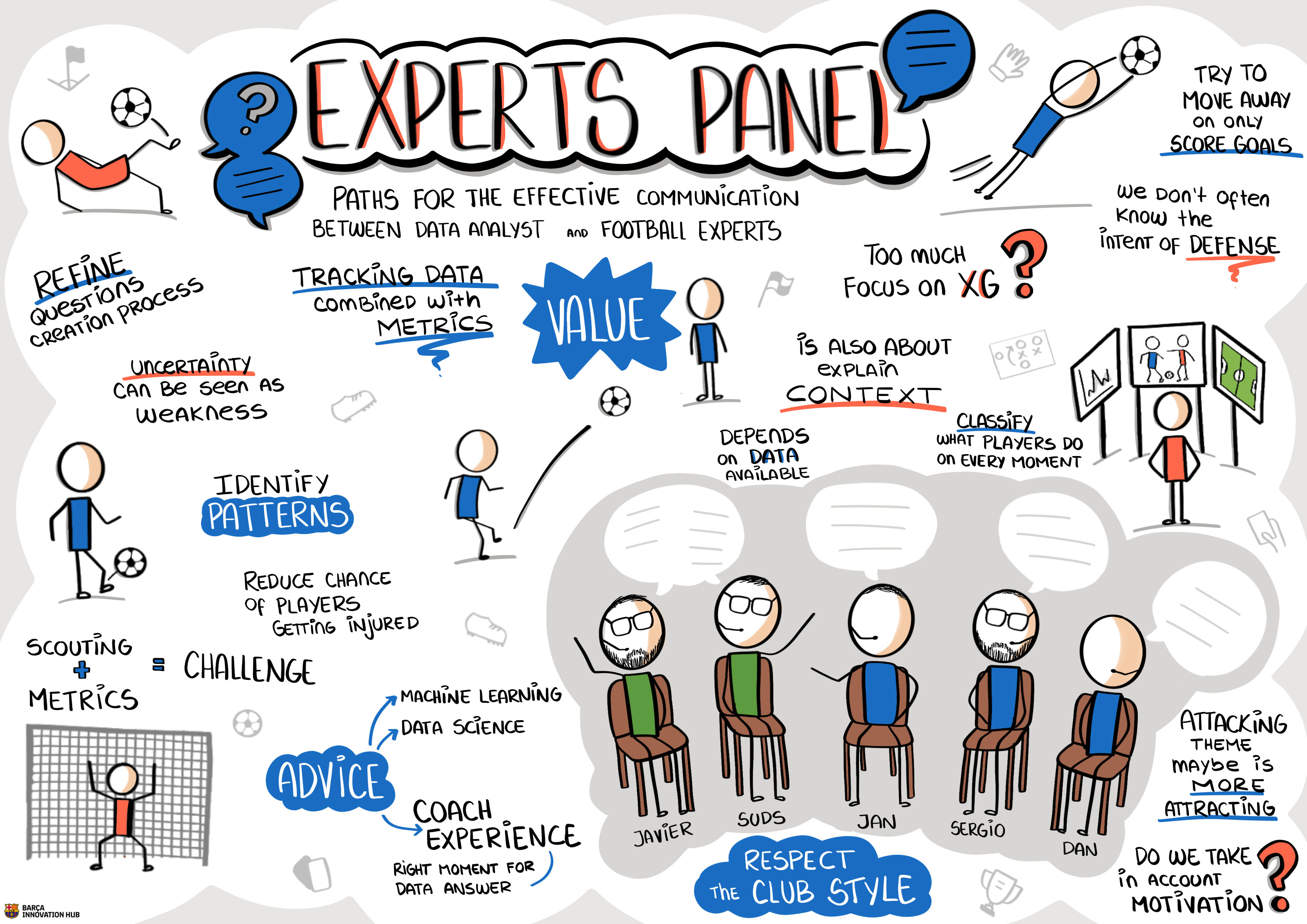 The second edition of the “Barça Nutrition Sports Conference”, took place on the 9th of October, with relevant personalities in the sports nutrition world.

There must be a balance between incorporating technology and the fan’s passion; we should never forget that fans are enthusiasts of the sport and its tradition.

For the 2019 edition, we chose 8 papers from all the papers received, to present their findings to leading football analytics representatives.

NEW TECH THAT WILL CHANGE THE SPORTS WORLD FOR EVER

During the next three years, the sports world will change more than it has done in the last ten.

Coaches shared ideas on how to improve and enhance football players during their careers.

On the 8th of October, the first edition of the “Barça Sports Physiotherapy Conference” took place, which was part of the “Sport Science week”.

TENDINOPATHY, AN INTEGRATED APPROACH AT THE BARÇA SPORTS MEDICINE CONFERENCE